As I began preparations for the 2019 DDG Stocking Stuffer of the Year Award, an urgent issue awaited me. This award, which for so many years was marked by a rigorous integrity and a devotion to unbiased excellence, finds itself stained of late by the actions of a series of judges. These arbiters of sideline excellence, despite their overt promises to adhere to the rule banning judges from being even considered for any of the awards, swerved so far from their duty as to name themselves the top award winner in each of the last four years*. The means for insuring that this unhappy outcome does not occur again in 2019 manifested itself the day Cthulhu appeared in our store. Upon his arrival it was immediately apparent that the other sidelines were held in thrall to him, particularly the frogs. 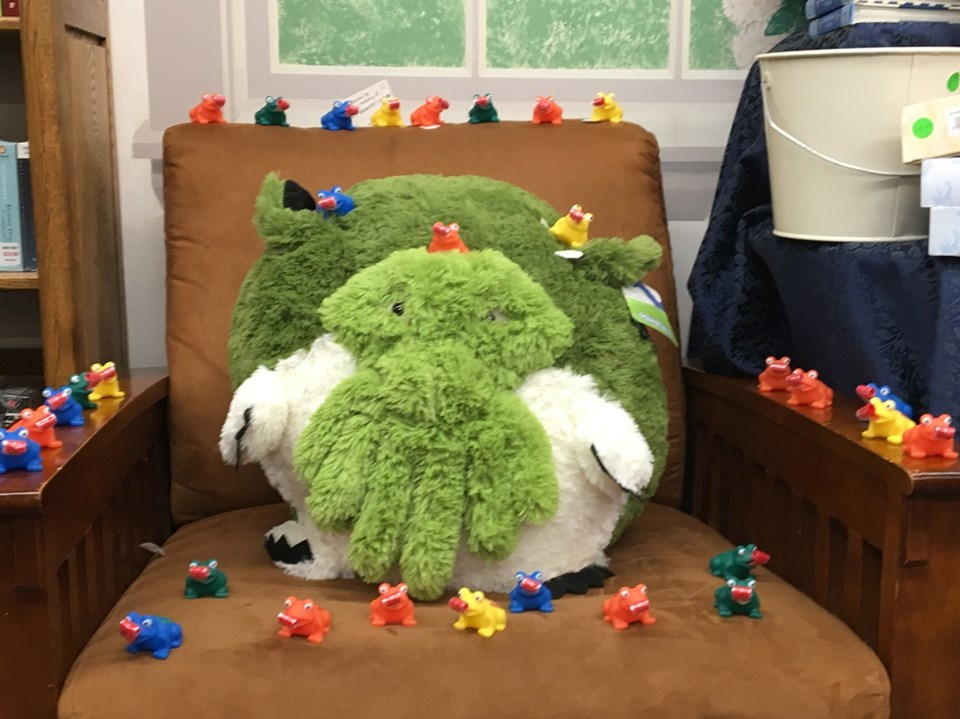 Yet beyond the firm command he exercised over our contestants I also took comfort in knowing that Cthulhu was a full sized Squishable and was clearly too big to fit in even the largest stocking. Still I took extra measures.

Kenny: O mighty and unfathomable one, he before him light and reason flee, we are most honored to have you at our store. Here is a question I have always been hoping to have answered. Clark Ashton Smith once wrote that “The skies are haunted by that which it were madness to know; and strange abominations pass evermore between earth and moon and athwart the galaxies. Unnamable things have come to us in alien horror and will come again. And the evil of the stars is not as the evil of Earth.” Is that true?
Cthulhu: Pallid worm that dares address me, I will arrange for you to answer that question yourself.
Kenny: I see. O ancient one do you deem yourself willing and able to be the judge of this year’s DDG Stocking Stuffer of the Year Award? 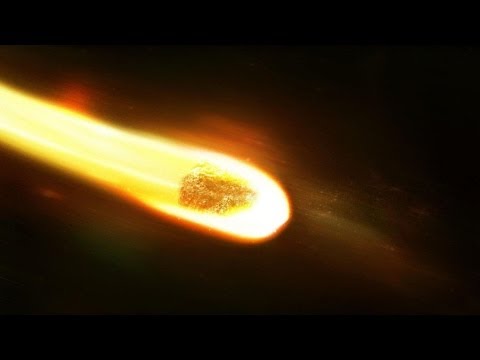 Cthulhu: Disquieting mortal I do indeed. That which is unknowable to lesser beings, and which would cause their minds to shatter like panes of glass struck by a flaming asteroid, is my province. I discern all.
Kenny: Umm, and are you also aware that it is your solemn duty to abstain from considering yourself for any of the awards?
Cthulhu: Infirm maggot though you are I am still appalled to hear that you could think me willing to do such a thing. It has been said that “The most merciful thing in the world… is the inability of the human mind to correlate all its contents.” That is why you should leave this to me.  Those of my subjects most worthy for each given category shall alone be the subjects of my deliberation.
Kenny: Thank you o roiler of minds.
Cthulhu: Let us begin. Our first category is the Most Worthy Frog. 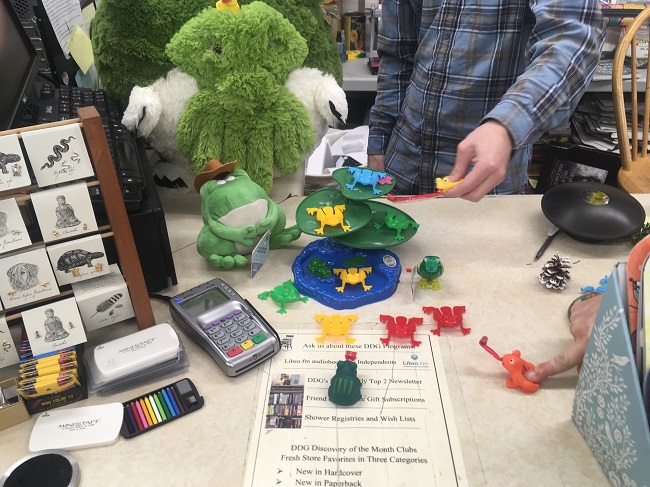 Kenny: I don’t recall that being one of our categories but even though it is so narrow that still seems to me to be a bit of a toughie. After all the long tongued frog and the tiddly wink Flip the Frog are both totally outstanding toys.
Cthulhu: Indeed I have seen you mindlessly disport yourself with both of them, fencing with the Long Tongue Frogs with Elliott, and straining yourselves to land the tiddly wink Flip The Frogs on the highest lily pad. Both toys yield great pleasure to humans. The tiddly wink frogs strain to achieve an ever higher station on the lily pads above whilst risking being trapped in the pond below where a  baneful creature lurks, waiting to consume them. This is a laudable enterprise but the resignation of the long tongued frogs, whose tongues shoot out when squeezed to mark their devotion to me, win this most important category. 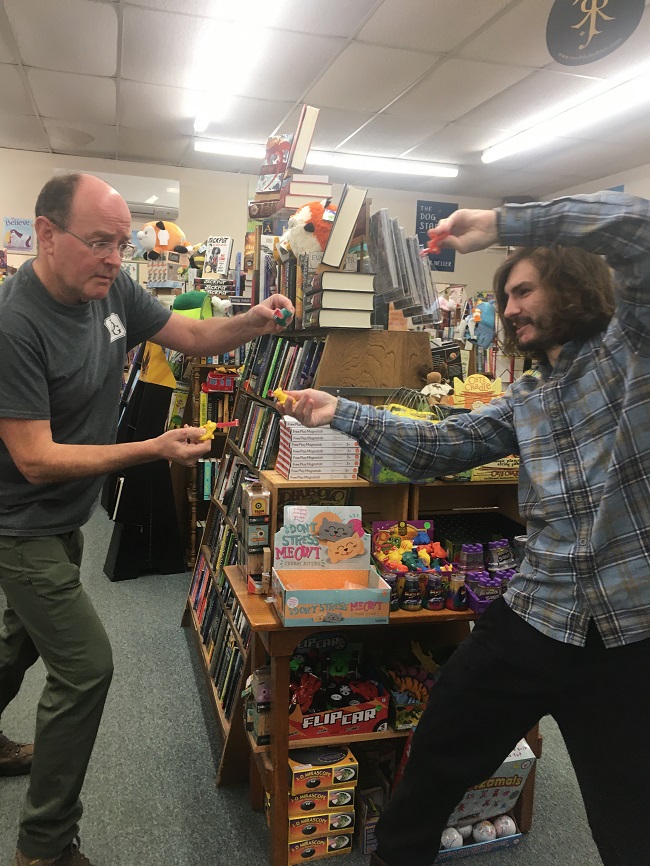 Kenny: A most worthy choice.
Cthulhu: Stifle your limpid assessment and allow me to declaim my judgments in peace.
Kenny: …
Cthulhu: Next up is the Toy Most Able to Proclaim Their Worship of Me. The candidates are the Free Play Magnatab, the Don’t Stress Meowt cat, the Mini Colored Pencil Kit, the Dandelion pen, the Sloth pen and the Unicorn pen. The Don’t Stress Meowt cat is delightfully compliant, the dandelion, sloth and Unicorn pens are all charming and well able to set forth their worship of me in ink, and the mini pencil set is even more compelling for doing that in many hues and even figuratively. And yet the winner is the amazing Free Play Magnatab, whose rows of hidden magnetic orbs rise up on command and best conveys the summoning of fleeting knowledge from hidden, seething depths from which it then again subsides. 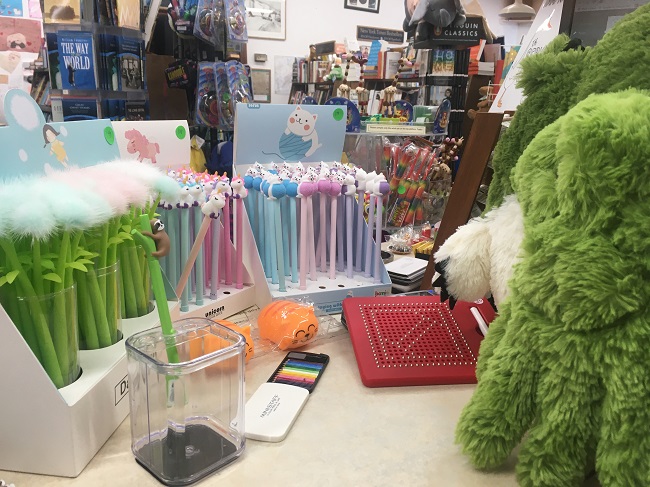 Kenny: Amazing indeed. I absolutely love the Free Play Magnatab for the pure tactile joy one takes in using it. I had not considered it in this weightier vein.
Cthulhu: That is why you are a distasteful mass of ungainly flesh whereas as I am master of many dimensions.
Cthulhu: Our next category is that Toy Best Able to Plum the Depths of the Multiverse and the contestants are the mini desktop curling kit, the djeco baby cot, and the tiny baking set. The mini desktop curling kit surely captures the movement of dense debris across the smooth surface of time, while the tiny baking set seeks to bring sense forth from disparate unrelated elements, but the winner is is the djeco baby cot, which while masquerading as a delightfully crafted baby’s oval rattle, is in fact a translator for all the languages of the multiverse. 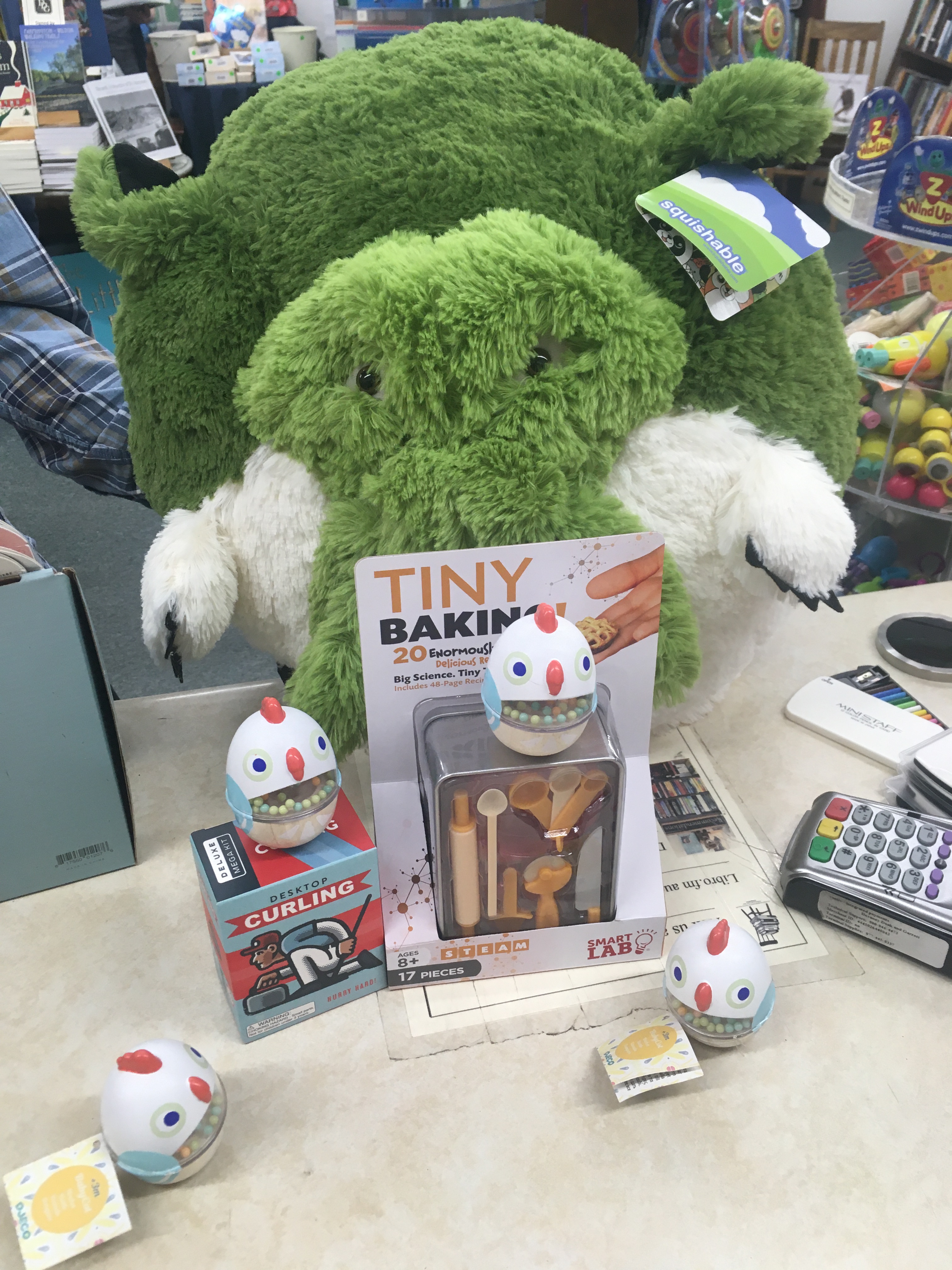 Kenny: I had no notion of that. I thought of it is as just a wonderful baby toy.
Cthulhu: Your lack of discernment is the least surprising thing I’ve learned of this last eon. And now to our final category, The 2019 Stocking Stuffer of the Year Award. We have only one contestant, I Cthulhu, Lord of the miasma which awaits all futile gropings for order. 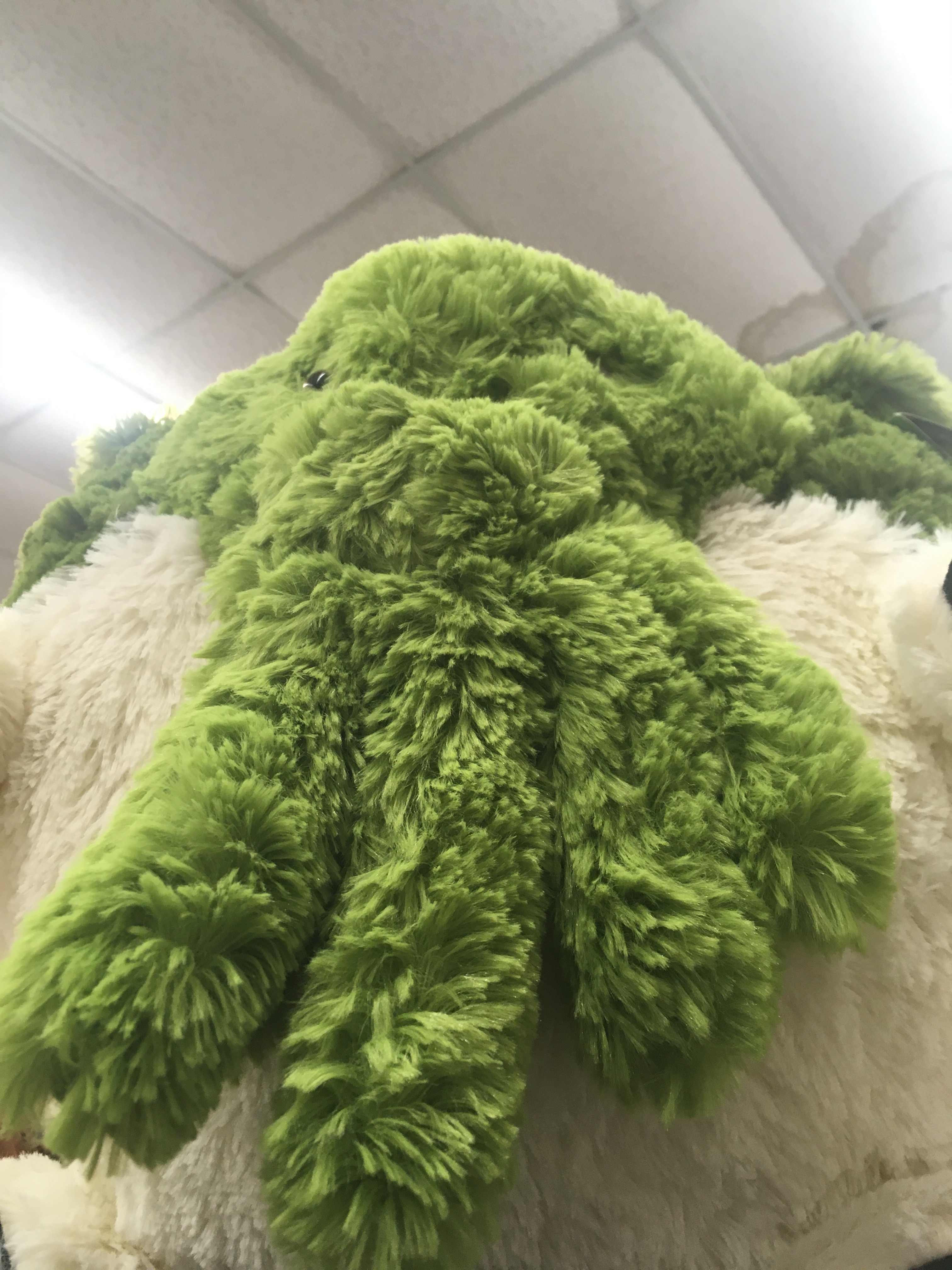 Kenny: No No. You swore to uphold the integrity of the award!
Cthulhu: O dithering imbecile. It must be thus, for all is me and I am all. No other outcome is possible. And now, as promised, I untether the febrile jelly which is your mind. 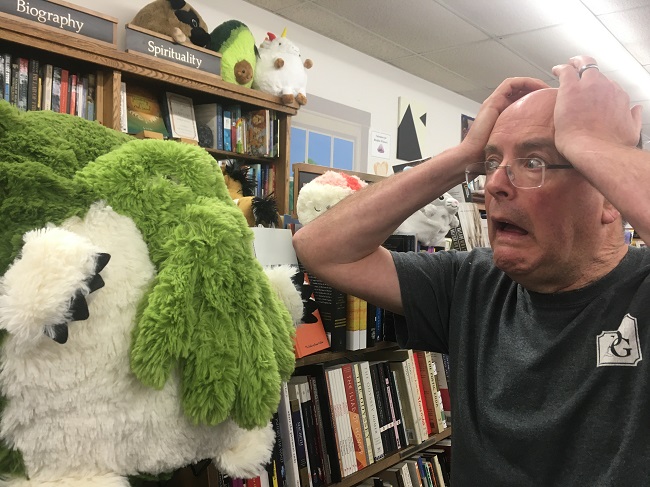