One of the great things about a bookstore is working with customers. People come in looking for books, obviously, and often there are hilarious exchanges that occur in this process. In addition to these funny moments, people feel comfortable sharing, and sometimes oversharing, what’s going on in their lives as they inquire about specific books. I often find myself doling out advice on a range of topics from marriage advice to finding the best realtor to well, just listening.  END_OF_DOCUMENT_TOKEN_TO_BE_REPLACED

Want a great way to cut down on Netflix binges and catch up on all those books and ARCs you’ve been meaning to read, especially now that Kenny has shared some of the season’s top picks? Take the June Book Blast Challenge with me! The goal is 30 books in 30 days, apportioned however you like. (Here’s the Google Doc link: http://ow.ly/M07v300ChUQ.) As in the May’s Book-a-Day Challenge, all books in all genres count toward your total. END_OF_DOCUMENT_TOKEN_TO_BE_REPLACED With summer poised to settle in with us us, and thoughts of summer reading occupying our prized moments of leisure, I was delighted to find that Summer herself was willing to take a few minutes of her time to share her book picks for the upcoming season..
Kenny: Hello, Summer. I know how busy Spring is is for you. Thank you so much for spending some time with us on this lovely May afternoon!
Summer: It’s a pleasure to speak with you, Kenny.
Kenny: When I think of summer reading I think of happy readers having time at last to immerse themselves in books of their own choosing or desire. What about reluctant readers, though? Is there some book you would recommend sharing with them that might be both a delightful read-aloud but also a spur to get them to engage in reading?
END_OF_DOCUMENT_TOKEN_TO_BE_REPLACED

As we head into the final weeks of school here in Vermont, the end of year teacher gift becomes something customers start to agonize about. Often families want to acknowledge the very hard work teachers have done all year for their kids, but find that they don’t really know what the classroom teachers might enjoy when it comes to an actual book. People often feel that getting a gift card is a sign of gift-giving defeat, but it’s not. It’s giving someone free reign to get whatever they want, and for most teachers this means getting something for the classroom.  END_OF_DOCUMENT_TOKEN_TO_BE_REPLACED

Yesterday was a slow morning. It was one of those mornings where it’s easy to think,”I’m actually losing money being open.” I was getting ready to leave for the day (blissfully, on Thursdays I leave at two) and feeling really badly about the slowness of the day, when an older man come in the store. He looked a little bit like Jack Nicholson, complete with the iconic Vermont spring-day outfit of a sweater, shorts and sandals with socks. He was looking for a card and Lizzy and I told him where to look for all the different cards we have. He lingered over the cards, very carefully looking at the ones he was interested in and then looking some more. We let him look, curious at his thoughtfulness over one card. Then something amazing happened.  END_OF_DOCUMENT_TOKEN_TO_BE_REPLACED The New York Times recently noted that “Masters of Prose” such as Jane Smiley, Calvin Trillin and Elena Ferrante had warmed up to writing children’s books. This trend, however, has not stopped at the boundaries of the river Styx, as the major publishing houses have now confirmed that some of the most accomplished deceased authors of all time have begun submitting children’s books as well.
Some of these new manuscripts, such as Geoffrey Chaucer’s middle grade fantasy, The Potter’s Tale, seem openly derivative. In a statement released by Chaucer’s agent, Armand Jean du Plessis, however, the Canterbury Tales author denied having read the works of J.K. Rowling until after he completed his own novel, and called the plethora of similarities, from the village of Swinemeade to lead character Henry Potter, a sure sign that Rowling was a medium who had used her abilities to peek over his shoulder as he worked on the other side.
END_OF_DOCUMENT_TOKEN_TO_BE_REPLACED

I am on the board of the Pride Center of Vermont and through my work there, I’ve seen what happens when passions combine and the benefits that can bring to the bookstore. There is an amazing organization called Vermont Businesses for Social Responsibility that works very hard to network businesses of all sizes with each other. Both the bookstore and the Pride Center are members. I had gone to a VBSR mixer in March with my Pride Center hat on and found that I was networking for the store just as much, with great results. END_OF_DOCUMENT_TOKEN_TO_BE_REPLACED On Friday the 13th, three panelists and a moderator sat in a room at Chicago’s McCormick Place convention center and talked about strategies for selling diverse books to bookstore and library patrons. As everyone who’s ever sat in a panel discussion knows, you learn a lot from your fellow panelists and moderator. That’s the first bonus. And the biggest prize is the surprise of the people you meet after the panel, people passionate and patient enough to wait in a bit of a line to talk to the folks at the table.
I think and talk a lot about diversity in children’s books, so it is a delight to meet people doing great and varied work in the field. After the panel, I met two women who are working on a book about the first African-American woman to run for Congress, who also happened to be the first African-American woman to become a commercial airline pilot. One of the two women was her granddaughter! She held a fantastic photo of her grandmother, who had that look of so many amazing women in the 1930’s — lean, tailored, confident. I cannot wait for this book to be written!

I also met a woman who is working to bring in a very interesting series of self-described “anti-princess” books from Argentina “for both boys and girls,” as they say on the covers (hooray!). These are colorful, sidebar- and comics-filled picture-book biographies about real-life strong women in history. Slim paperbacks feature both well-known and little-known heroines, from Frida Kahlo to Juana Azurduy (a military leader who fought for South American independence from Spain in the 1800’s). I think kids would find these books very appealing. There may be a few tweaks needed for an American audience (I’m really just thinking about an illustration or two in the Juana Azurduy book), but I love the bright, colorful approach and fascinating heroines. These aren’t books that scream “library” to kids, and that is also a terrific thing. (Note: my California-days Spanish isn’t strong enough to read my sample copy fluently, but the parts I could read were simple and interesting.)
Also in line was Amelia Case, a chiropractor from Chicago who has written a series of books called “Princesses with a Twist,” about life for Cinderella, Snow White, Sleeping Beauty, the Little Mermaid, etc., after their weddings. It’s a life where Cinderella branches out as an entrepreneur who builds a glass-shoe factory (I was relieved to discover that there’s a tempering process in the factory that makes the shoes pliable, soft, and comfortable. In that case, I wouldn’t mind a pair of those glass sneakers.) It’s also a world where Snow White overcomes her understandable fear of apples and creates a booming business. The princesses are friends who support each other and solve problems together. I confess I wasn’t wild about the art in the books, but I like the snappy premise and collaborative spirit behind this project, which raised $30,000 in a Kickstarter campaign last summer. Who knows? This could, like the Little Mermaid, have legs.
The last, most patient visitor to the tables was a woman in a beautiful green and white, elaborately tied head wrapping, who publishes books by Muslim and spiritual authors. (The press seems to be of the newer hybrid, partially author-supported variety.) They are working on their first children’s books, and in addition to their nonfiction titles, Niyah Press publishes a gorgeous calendar called “Beautifully Wrapped,” which has the most extraordinary photos of beautiful, real women — young and old, humble and fancy — from around the world. I was so taken by the photographs! They are truly special. And I will be looking forward to books featuring Muslim children; there are far too few of them.
It was so refreshing to hear about things happening both within and outside traditional publishing realms, and exciting to look forward to the fruits of so many passionate creators! 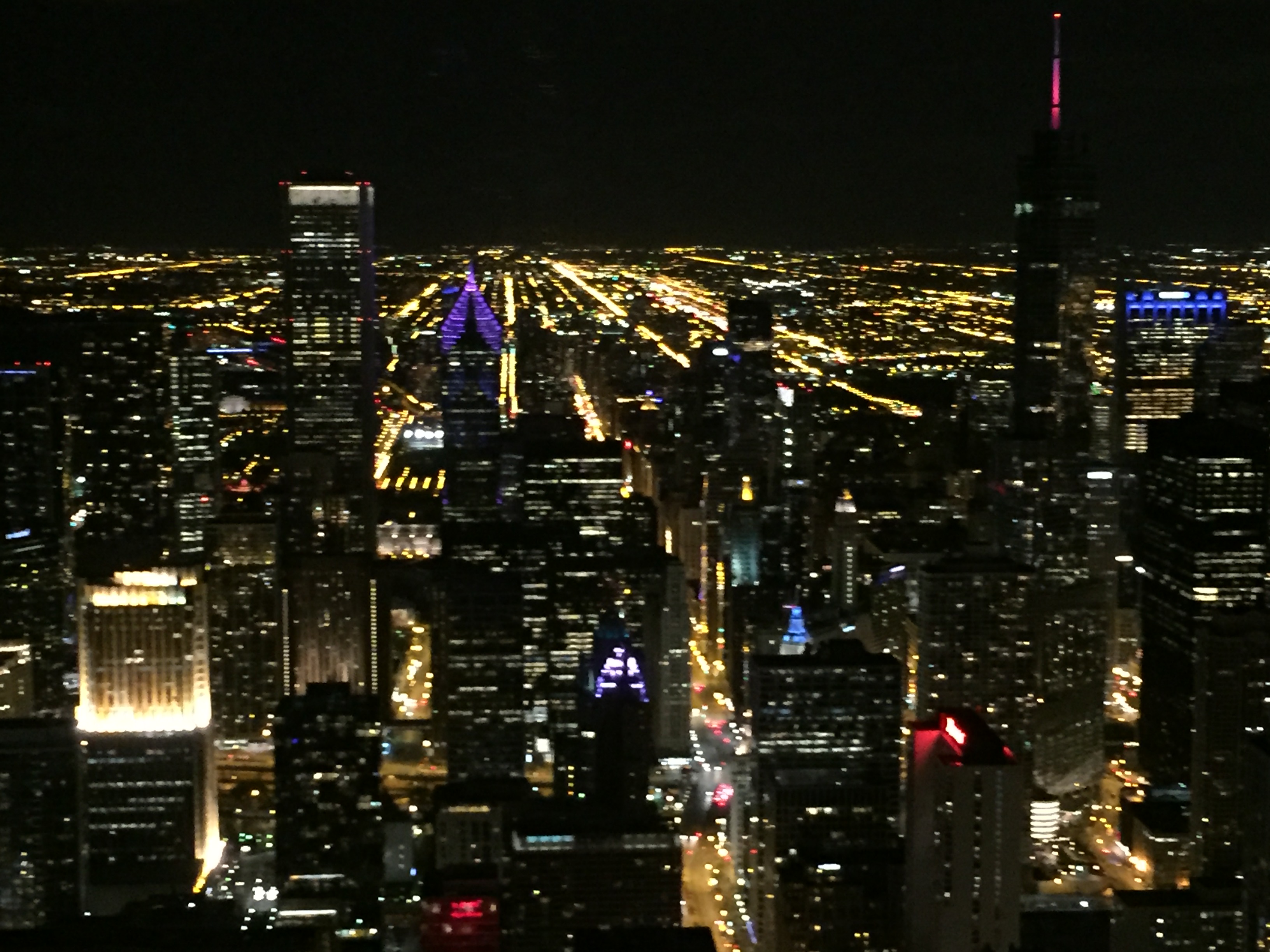 Chicago, Chicago, it’s so good to be back in the windy city for BookExpo! I arrived on Thursday afternoon too late for the show floor, so I can’t report on that just yet, but I did arrive in time for a couple of fantastic book parties.
Candlewick hosted a truly phenomenal slate of authors and artists in a cocktail party at the Hubbard Inn: Aaron Becker (Return), Kate DiCamillo (Raymie Nightingale), Jason Carter Eaton (How to Track a Truck), Carson Ellis (Du Iz Tak?), Paula Garner (Phantom Limbs), Dean Hale and Shannon Hale (The Princess in Black Takes a Vacation), Richard Haynes (Slingshot and Burp), Oliver Jeffers (A Child of Books), Megan McDonald (Judy Moody and the Bucket List), John Rocco (How to Track a Truck), Maggie Tokuda-Hall (Also An Octopus), and Sam Winston (A Child of Books). Wow!!
BookExpo is the place where I get to see some of my favorite book people, just once a year. Catching up with old friends at the Candlewick party filled my heart with happiness. I also FINALLY got to meet John Schu in person, aka Mr. Schu, aka @MrSchuReads, who is not only extremely young, but as enthusiastic and warm and wonderful as his book reviews. He is such a passionate advocate for children’s literature, and it was a joy to chat with him.
We also got to see the city from a spectacular vantage point at Sourcebooks’ beautiful party at 360 Chicago — a building so tall it makes even other giants of the Chicago skyline look comically small. There’s a feature on the observation deck called the Tilt — a row of glass windows with side handrails to hold as the windows tilt gently toward the ground and you find yourself looking down, down, down 94 floors, 1,000 feet above Michigan Ave. 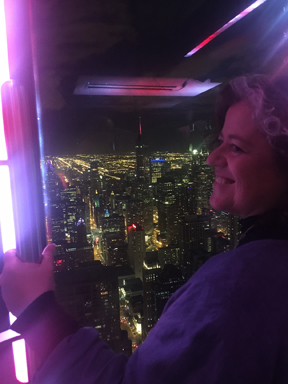 Tomorrow, I’ll be sitting on a panel to talk about diversity in children’s books, and will have a chance to see the show floor, see more old friends, and discover new books. Hope to run into many of you there!

The life of a bookstore owner has many perks: free books, great customers, meeting authors, and more. But for me the best part is making connections with children. Kids come to the store every day and there is real joy when these children become regular customers. To become part of a child’s world is a gift. Watching a little one learn to walk, read, and get comfortable in the bookstore is such fun. The best part is when the kids get to know me. END_OF_DOCUMENT_TOKEN_TO_BE_REPLACED