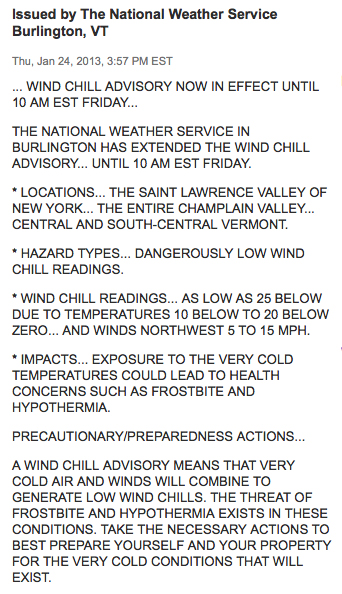 There are strange things done in the midnight sun
By the men who moil for gold;
The Arctic trails have their secret tales
That would make your blood run cold;
The Northern Lights have seen queer sights,
But the queerest they ever did see
Was that night on the marge of Lake Lebarge
I cremated Sam McGee.
(from The Cremation of Sam McGee, by Robert W. Service)

Vermont has fallen well below the zero-degree mark for the past few days. Tonight, the wind (chill level down to -25) is whipping through the poor trees, which make ominous sudden cracking noises as they freeze. This kind of cold makes even warm, layered clothing feel tissue-thin, and getting into cold cars feels like entering the 9th circle of Dante’s Inferno. It’s the kind of night you can almost imagine cremating the corpse of a gold-rush miner pal to warm your hands on.

Talk of your cold! through the parka’s fold it stabbed like a driven nail.
If our eyes we’d close, then the lashes froze till sometimes we couldn’t see;
It wasn’t much fun, but the only one to whimper was Sam McGee.

Note: It doesn’t pay to be a whiner, folks. Gets people fired up to, um, fire you up.

At any rate, the universal Vermont preoccupation with the cold these days made me think of writers who have best been able to capture icy chill in their stories and poems, and I invited friends to contribute some of their favorites.

Lisa Doan sent this, from The Wolves of Willoughby Chase:

It was dusk – winter dusk. Snow lay white and shining over the pleated hills and icicles hung from the forest trees. Snow lay piled on the dark road across Willoughby Wold, but from dawn men had been clearing it with brooms and shovels. There were hundreds of them at work, wrapped in sacking because of the bitter cold, and keeping together in groups for fear of the wolves, grown reckless and savage from hunger.

Sandy Rouse contributed these lines from “The Snow Queen,” by Hans Christian Andersen:

The snow-flakes grew larger and larger, till at last they looked just like great white fowls. Suddenly they flew on one side; the large sledge stopped, and the person who drove rose up. It was a lady; her cloak and cap were of snow. She was tall and of slender figure, and of a dazzling whiteness. It was the Snow Queen.

Siobhan Henry-Hooker reminded me of these incredible lines from Dylan Thomas’s A Child’s Christmas in Wales:

All the Christmases roll down toward the two-tongued sea, like a cold and headlong moon bundling down the sky that was our street; and they stop at the rim of the ice-edged fish-freezing waves, and I plunge my hands in the snow and bring out whatever I can find.

Our snow was not only shaken from white wash buckets down the sky, it came shawling out of the ground and swam and drifted out of the arms and hands and bodies of the trees; snow grew overnight on the roofs of the houses like a pure and grandfather moss, minutely -ivied the walls and settled on the postman, opening the gate, like a dumb, numb thunder-storm of white, torn Christmas cards.

Chris Tebbetts invoked C.S Lewis’s passage from The Lion, the Witch, & the Wardrobe:

There was a crisp, dry snow under his feet and more snow lying on the branches of the trees. Overhead there was a pale blue sky, the sort of sky one sees on a fine winter day in the morning. Straight ahead of him he saw between the tree trunks the sun, just rising, very red and clear. Everything was perfectly still, as if he were the only living creature in that country. There was not even a robin or a squirrel among the trees, and the wood stretched as far as he could see in every direction. He shivered.

Ariel Zeitlin Cooke shared another from that book:

…[Edmund] found himself stepping out from the shadow of some thick dark fir trees into an open place in the middle of a wood. There was crisp, dry snow under his feet and more snow lying on the branches of the trees. Overhead there was a pale blue sky, the sort of sky one sees on a fine winter day in the morning…Everything was perfectly still, as if he were the only living creature in that country.

Our feet crunched over the crisp snow and little gray footprints followed us.Pa made a long shadow but mine was short and round.I had to run after him every now and then to keep up, and my short round shadow bumped after me.

Just to show how keyed in we Vermonters are to all things ice and snow, Vermont author Rebecca Rupp shared a link to a blog post she wrote last November that gathers together all manner of wonderful winter books. This is an extraordinary resource!

I’ll give Lee Bennett Hopkins the last word, with his poem “Winter” from City I Love:

NEVER
EVER
quarrel
with
winter.
It
ALWAYS
wins.

There was a veritable flurry of entries sent in and not enough space to include all of them, so, Dear Readers, you are invited to try to out-freeze each other with your own favorite chilly passages from children’s literature and classics in the comments section below.