My mother, who is 92, lives in a nearby assisted living residence, and I visit her in the mornings on my way to the bookshop. We sit together at her breakfast table with three other ladies, and while they eat (cornflakes or oatmeal, followed by scrambled eggs and toast, or pancakes on Tuesdays and Thursdays) I drink my coffee and jot down my staff projects list for the day. I share tales of store events and funny customers, and they give advice about store layout (too many places don’t have enough chairs, or good light) and staff attire and shelf height and well… everything, including an admonition to “put on a little lipstick, dear, before work.”  I sometimes tuck a new impulse item or two in my bag for their amusement, and leave behind both publisher swag and puzzles with damaged boxes that are headed for our clearance rack – new puzzles are very popular in the activity room, and those shiny padded envelopes that some publishers use for ARCs are just perfect to recycle to mail packages for great-grandchildren’s birthdays.

Yesterday my schedule was a bit unusual (HVAC guy at the store at 7 a.m., extra coffee all around), and my visit was postponed until late afternoon. When I pulled up outside, I was alarmed to see a fire truck, two ambulances, and the county sheriff’s car all in front of the entrance, lights flashing and doors ajar. The front doors of the building were blocked open – an uncommon sight in a residence with Alzheimer’s patients who wander – and the door security alarms were buzzing loud enough to hear through my closed car windows. I parked on the side of the road to leave room in the small parking lot for the emergency crews and headed inside. It’s not that unusual to see an ambulance at the residence – staff are obliged to call for help if a resident complains of chest pain or falls – but this level of response seemed more serious. As I walked in, the lobby was full of residents in various stages of confusion and upset, and staff were directing the firemen toward the dining room. The nursing director caught my eye, shook her head, and mouthed “it’s fine,” as she pointed toward the group of chairs in the front entry. I took my mother’s hand and led her to sit down, inviting some of her tablemates to join us.

As it turns out, the commotion was caused by a piece of garlic bread that got caught in the side of a toaster oven during dinner prep (it was lasagna night), began to smoke a bit, and set off the smoke alarm. The kitchen staff promptly unplugged the appliance and opened all the windows, but the alarm system triggered calls to the fire department, which in turn initiated a call to the local medical rescue – it’s rare that an ambulance WOULDN’T be needed at a nursing home if there’s smoke – and the sheriff, who was patrolling nearby, jumped in to help. It was a LOT of excitement over an errant piece of bread, but the true emergency was now apparent. Dinner (normally served at 5 p.m.) was going to be late, the entire resident population was out of their rooms, some rather upset and confused about the racket, and the staff had their hands full moving folks away from the doors and back toward their activities.

My mother moves rather slowly, and the prospect of the walk back to her room only to need to turn around and begin the journey back to the dining room for dinner was too much to contemplate, so we elected to stay put until supper was ready. I fished in my bag for something to distract her – where I found a scruffy paperback copy of Rita Williams-Garcia’s ONE CRAZY SUMMER, which I had rescued from the donation box at the store to reread before it headed off in the box to the women’s shelter downtown. The cover was badly ripped, and one of the staff had taken the time to tape it together on the inside, and stuck a small strip of stickers inside to use as a bookmark. “Mother,” I said rather loudly, “can I read this to you? It’s for one of my book clubs. It’s set in the ’60s, and maybe you can help me with the history.”

Nothing gets my mother’s attention quite like the opportunity to educate, so she settled into the armchair and I perched on the ottoman to read aloud. Most of the residents milling about the entryway made the same decision about the difficulty of two walks down long hallways before dinner, and soon  every chair in the living room was full, and I decided to just stand up in front of the fireplace to read, open book in hand, and sent up a quick prayer to St. Blaise that my “big voice” would last this late in the day. 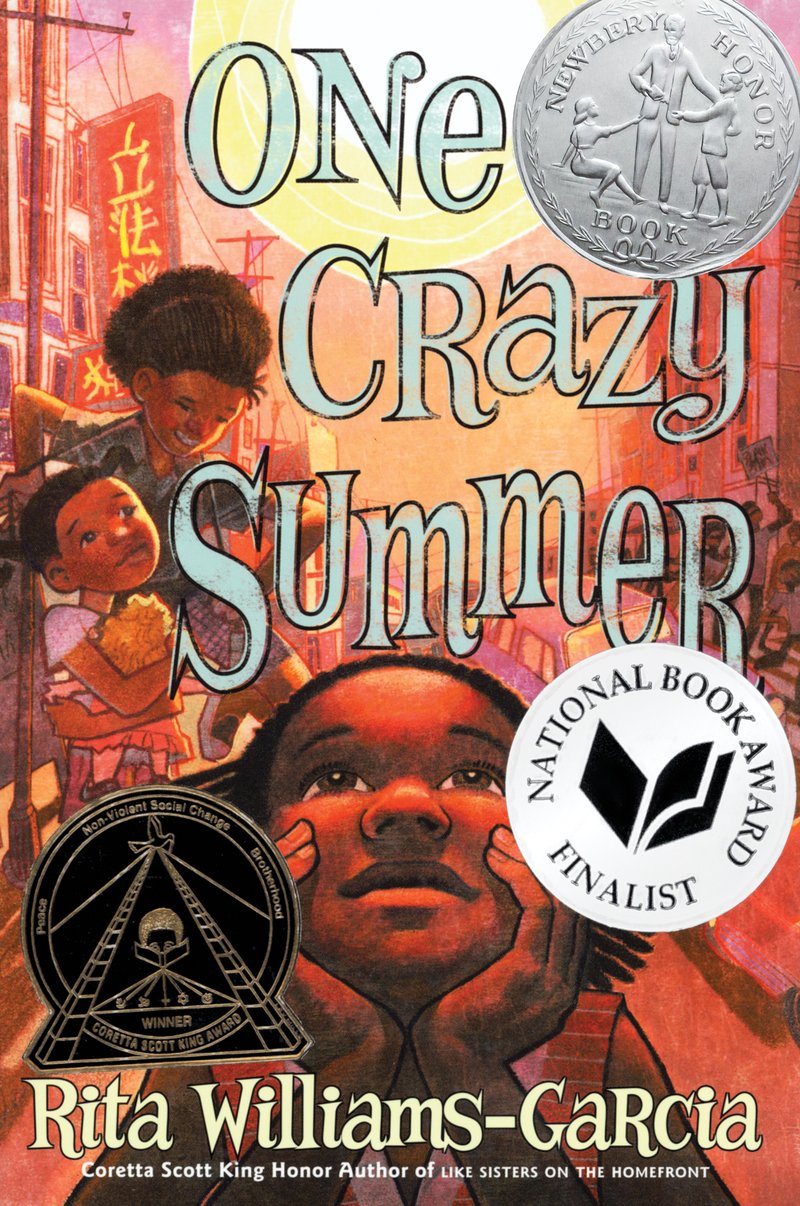 And off we went, into the summer of 1968, with Delphine, Vonetta and Fern, their trip to Oakland to find their mother Cecile, and her decision to enroll the girls in a Black Panther summer day camp. It’s a brilliant book, full of humor and “just right” moments of dialogue between the sisters, and was recognized with just about every single literary prize available in children’s literature. It is not, however, a title I have ever read out loud, and I certainly hadn’t practiced the first few pages as I normally would before reading to a group… just to decide on pacing and pauses, and to manage the page turns cleanly without interrupting the narrative.

Of course it didn’t matter. The living room full of residents just sat listening.  Some closed their eyes (they might have been dozing, or perhaps just concentrating) some jumped in with “yes, yes” at breaks in the dialogue, and one woman interjected “yes, Lord!” at pauses like one might at a prayer meeting. But as we read together, and I grew more comfortable with speaking at a higher volume, the room got smaller and it became story time. When the bell sounded for dinner, no one got up. I read to the end of that chapter, and gently placed the book on the coffee table. “How about if we go eat, and then we’ll pick this up again tomorrow?”

There was a pause for a minute, and then residents began pulling walkers a bit closer to stand up, and adjusting oxygen lines and cardigans. We made our way toward the dining room, a rather slow-moving but determined group, no longer upset and distracted by the near emergency and late meal, but talking about Martin Luther King, and the Black Panther movement,  and their own memories of the 1960’s. It was a conversation that continued through dinner, and I just couldn’t bring myself to leave. I heard stories about the civil rights movement in our own community, about school integration from retired teachers, and about raising grandchildren when parents were unable to do so. I heard in that dining room exactly what stories can do – take us away from our present moment and our concerns, whether real or imagined, and take us somewhere else entirely. And in that experience, that precious time spent in the lives of characters and places both real and invented, we are brought back to truths in our own minds and hearts that we might have forgotten. Great books bring us both far away and back home again, at every age of our lives. And that gives me great comfort, indeed.

5 thoughts on “An Unlikely Storytime”