Everyone who works in children’s books is familiar with the Harry Potter conundrum. Written over a 10-year span, the books increased in complexity and emotional heft book by book as the characters aged up with their audience. Kids who read the first charming, magical romp when they were seven were 17 by the time the 700+ page final tome rolled around. Not a standard model for series publishing for children, the series nonetheless defined the childhoods of a generation of readers and captivated adults in equal measure.

If you’ve ever worked in a bookstore, you also know that Harry Potter conversations themselves are rife with tricky interactions. Many a precocious six, seven, or eight year old has read Harry Potter, leaving their parents confident that they are ready for something just as thick or written at an equal level (which by book seven basically means YA). It’s almost a bookselling cliché at this point—that everyone’s gifted grandchild has read Harry Potter years ahead of their peers and needs something new to challenge them at their “advanced level.”

As much as the cliché is based on real bookstore dynamics, these conversations don’t make me roll my eyes. I understand why it’s so confusing. Harry Potter has entered our cultural zeitgeist to the point where kids are motivated to read beyond their comfort zone just to find out what the excitement is about. It doesn’t mean that going back to something a little lighter is a backslide, and it also doesn’t mean their attention will be held by something equally hefty and involved. That’s what I tell parents and grandparents all the time, and, honestly, they usually get it.

But reading level isn’t the only issue at play. By the time the fantasy has careened to its riveting yet somber end, a large number of beloved characters have met grisly ends, and everyone who remains carries indelible scars of trauma and loss. Taken as a whole, this is not a series for your average eight or even nine year old, especially when you add in its sinister explorations of intolerance and totalitarianism. But the pull of Harry Potter is strong. Eager to share the magic of the wizarding world with their kids, parents want to rush in where booksellers often urge caution.

Like many booksellers, I used to believe that it was better to just wait. After all, why rush into something too early if you’ll get the most out of it by holding off a few years. But book one is luminous and magical and perfectly pitched to enchant younger readers with the allure of worlds unseen. Who doesn’t want to share a piece of that with their emerging reader? As a parent of one of those dreaded precocious readers who wants to read everything and has heard so much about Hogwarts and Harry Potter, I suddenly found myself wondering: why not?

If book one is perfect for him right now, why not let him have that experience? I talked to him about why the whole series isn’t right for him right now, and we made a deal. We’ve been reading the first book together the first time so we can share the experience and talk about it. And then he can reread it as many times as he wants before we read the next one. And when will that be? Well, for now 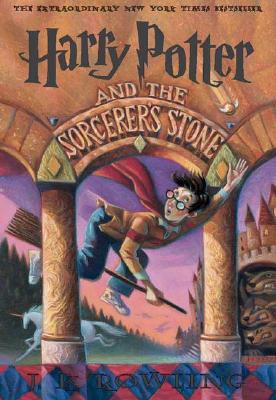 we’ve decided six months until book two and we’ll see how that goes. Maybe we’ll feel ready for book three in six months after that or maybe not. Book three starts transitioning to a markedly grittier tone, with the terrifying threat of the dementors and the arrival of Sirius Black. I talked to some friends, and one reported that they’re reading a chapter every other week to spread it out over a longer period of time. Another reported that her kids adored books one and two but started getting nightmares at book three, so they stopped for a while. And of course it only gets darker from there. But that’s okay. We can wait.

With months or even years between each installment, it might take us a long time to get to the end, but why does Harry Potter have to be all or nothing? After all, anticipation of the next book is half the fun. Just remember what it felt like for all of us the first time around!

(Oh, and we don’t plan to get the illustrated editions any time soon, as magnificent as they are. The true joy lies in imagining the world for yourself, as a like-minded customer and I agreed earlier this week.)

1 thought on “The Harry Potter Conundrum”