Once upon a time, there lived an innocent bookseller who skipped along the path with a basketful of flowers, singing “Inventory will soon be done / Counting the books, one by one.” She was dreaming of a store perfectly organized, each title in its place, with accurate numbers in the point-of-sale system’s on-hand quantity column. “No more negative numbers!” she crowed. “No more mystery copies of unfindable Milk & Honeys and Dog Man! We will know where every single book lives!”

She dismantled displays to shelve books in their proper sections for a cleaner inventory process, so her store looked oddly bare in patches, like this: 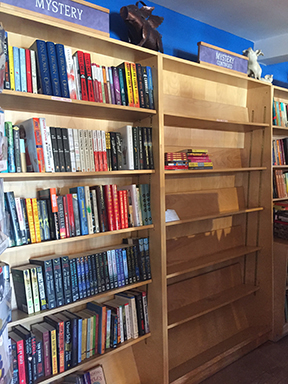 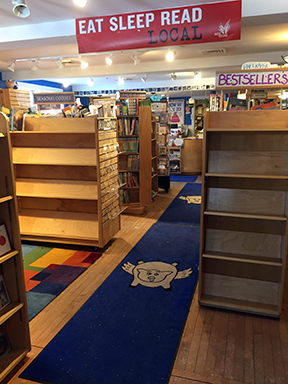 For a week she did nothing by day but prepare 1460 square feet for the grand event, and by night she dreamed of a team of RGIS inventory specialists descending upon the store armed with lightning-fast scanners, ready to count 25,000 books in less than five hours! What a marvel it would be! And when the sun had risen the morn after, she would re-open her little store and welcome in the world, who would marvel at the ability of its guardians to locate any title on any shelf in the land of the Winged Pig.
On that silver Sunday, she rose at 4:30 am and gathered a box of coffee and a baker’s dozen of bagels at the local Donuts of Dunkin to share with the RGIS supervisor and staff, who were arriving at 6:15 and 7 am. She lit the lamps, set the table, and unbarred the door. But lo, dreams are flimsy stuff, and though the RGIS staff were noble, and good, and accepted ARCs to take home and read, their scanners encountered blatting error messages with each ISBN-13 barcode that stymied the technical wizards at both ends of the operation. Much consternation and many phone calls peppered the morning as supervisors and tech heads conferred. But afternoon inventories elsewhere loomed o’er the heads of the field staff, who left one by one, and by 10:30 am, all that was left of the bookseller’s inventory dreams were bagel crumbs and half a box of joe, and the promise of a future date on which to try again.
As she latched the door behind the supervisor’s retreating form, the bookseller looked about her, at all those displays needing to be re-mantled. All those cases wanting to be filled again for the joy of readers, face-outs returned to plump up the shelves, bestseller and New & Notable areas to be repopulated, Do Not Inventory signs removed from sidelines. With the help of a doughty staffer, the bookseller set to the replenishing of the Porcine Aviator. It was a daunting task, made more so by the fact that it had all been for naught.
Well, not entirely for naught. After all, the week’s work had brought brilliant order to several areas of  former murk. The Bog of Self-Help found itself clarified into Motivation & Inspiration, Spirituality, Health & Wellness, Love & Relationships. Parenting was once again disentangled from Education, and Current Events & Politics were given more breathing room. Teen nonfiction found a glorious new home, freeing up space near Education for workbooks, math, and money titles. Sports (Juv) was liberated from its interloping side of the Action/Adventure spinner and given its very own kingdom—on a cart! Puzzle books were reunited, sticker books (which multiply when one turns one’s back) were safely corralled off from the rest of activities, and the adult and juvenile crafts found a spot to nestle near—but not too near— drawing & painting instruction. All were tucked into place, lights out by 9:30 pm that Sunday evening. It had been a 15-hour day after a lengthy, hardworking, and brutally chilly winter week, but what of that?
Boys and girls, the bookseller, less innocent now and much more bedraggled, flowers scattered by the path, sets off on Tuesday for far-off kingdom a few hundred miles away in search of sun and warmth—and a barcode scanning app that exports to CSV or Excel so she can do inventory her own darned self.

2 thoughts on “The Inventory That Wasn’t: A Fairy Tale”