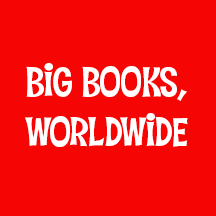 The other day, we had a sale that might have been a first: we sold a stack of books intended to stock another bookstore. Not only that, but our customer admitted she was buying them for a big box store.

“His clientele is limited, but ever so faithful,” said Marco’s grandmother, Janet, our customer, as she explained that her grandson, now 10, had set up a bookstore in her basement using cardboard boxes. “It’s been going on for around four years now,” she said. “We pay for the books, but do have to return them so the inventory isn’t completely depleted.”
When I asked about the young entrepreneur’s prices, his grandmother said, “The going rate for a book varies, but is usually under a quarter.” Then she interrupted herself to correct, “It does depend on whether there’s a special. Sometimes he’ll bundle books together, using chenille sticks—that’s what we have to call pipe cleaners now—borrowed from his sister’s adjacent basement business, Jazzy Jewelry. And there are frequently 50% off coupons, which he makes on our printer. I’ll see him bound up the stairs, heading to the computer: ‘Gonna do some advertising, Nana!'”
When I asked Janet to describe the Big Books Box Store, she said, “The kiddos have had a series of stores in our basement, all starting from some big boxes that we had from appliance purchases. They initiated all of this. When I was teaching I would do a lot of of listening and observing of the children and then try to provide the materials and resources to expand on their ideas.” I’d say she’s pretty brilliant at providing materials, not to mention a creative environment that inspires amazing enterprises.
Marco has accumulated about four milk crates filled with books (alphabetized by author’s last name), and he’s recently expanded. Last week, they made a trip to the Bouchard-Pierce appliance store for some new boxes and came out with two refrigerator-sized additions to Big Books and Jazzy Jewelry. “The old boxes were getting a little tattered.” Marco’s younger sister, Lucy, proprietor of Jazzy Jewelry, pumped her arm when she caught sight of the new windfall. “Nana, we scored!”
Of course, I needed to know more about Big Books, Worldwide and Jazzy Jewelry, so Janet and the children’s mom, Abbie, generously emailed photos and some more information about the Flying Pig’s local, independent, and heretofore unknown, retail colleagues: 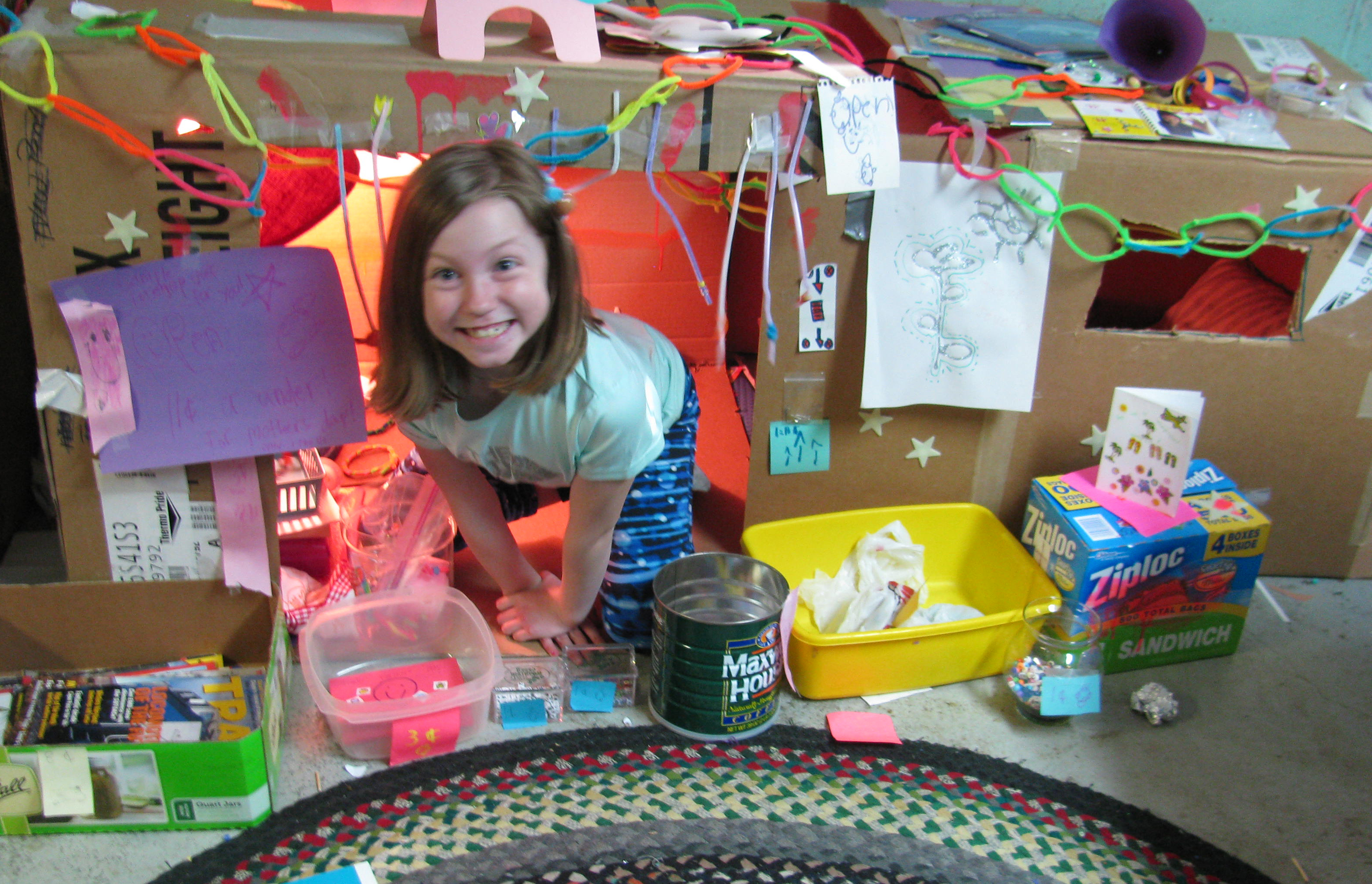 In her email, Janet said, “Marco said he thinks that Big Books has lasted for the past (we think) four years ‘because it gets a good business because a lot of people love books.’ There is an ATM available (no debit card needed) so shoppers have funds available to make their purchases. Marco creates advertising flyers that often have discount coupons. He prints these on our copier and distributes them to his regular shoppers: Mom, Dad, Lucy, and grandparents Nana and Poppa. He also has a ‘staff picks’ section which features one or more of his favorite books. Recently he has added the Harry Potter series.”

She adds, “Marco created a logo for his Big Books store. It is a circle with an open book in the middle and a B on the front and back covers of the book. We made a rubber stamp of this logo that he used to create bookmarks to sell to his customers.” 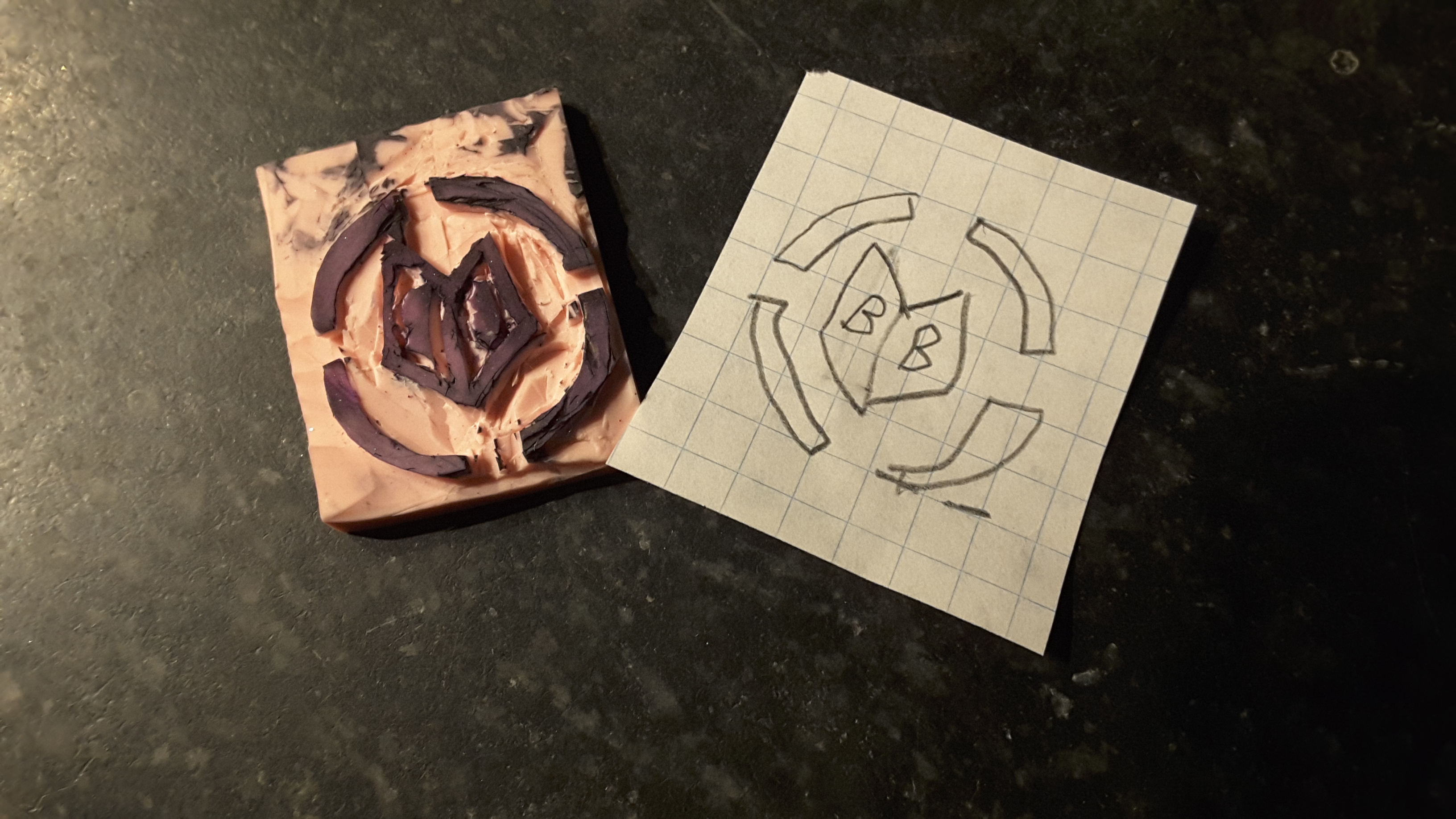 “Both kiddos have at one time or another made scanners that they use to check the prices of items they sell. Marco created a paper and cardboard computer to use in his store. Both Marco and Lucy have tip jars at their stores. Marco’s currently has a note on it that ‘tips will go to the Humane Society.’ ”
“We have a world map in the basement,” Janet told me, “and one day, I came down and Marco had put a sign above the world map that reads, BIG BOOKS, WORLDWIDE.”
Do the proprietors of the stores help each other with their businesses? Janet reports, “Lucy said she likes the coupons that Marco has, and the discount cards that are sometimes available. For a limited time, with a discount coupon purchased for $1, books are free. Marco and Lucy make greeting cards that are sold at both their stores. If Marco hasn’t made any he buys cards from Lucy to sell at his store. He occasionally buys beads from Jazzy Jewelry to make special bookmarks to sell at Big Books.”
“Since the bookstore is in our basement the shoppers are limited. When there is a family gathering for special occasions the number of shoppers greatly increases! These special occasions are known in advance and special planning for Big Books takes place: special advertising and coupons, book bundles, and making sure that there is sufficient money in the ATM container. Books are returned; Big Books is sort of like a lending library with a fee.” 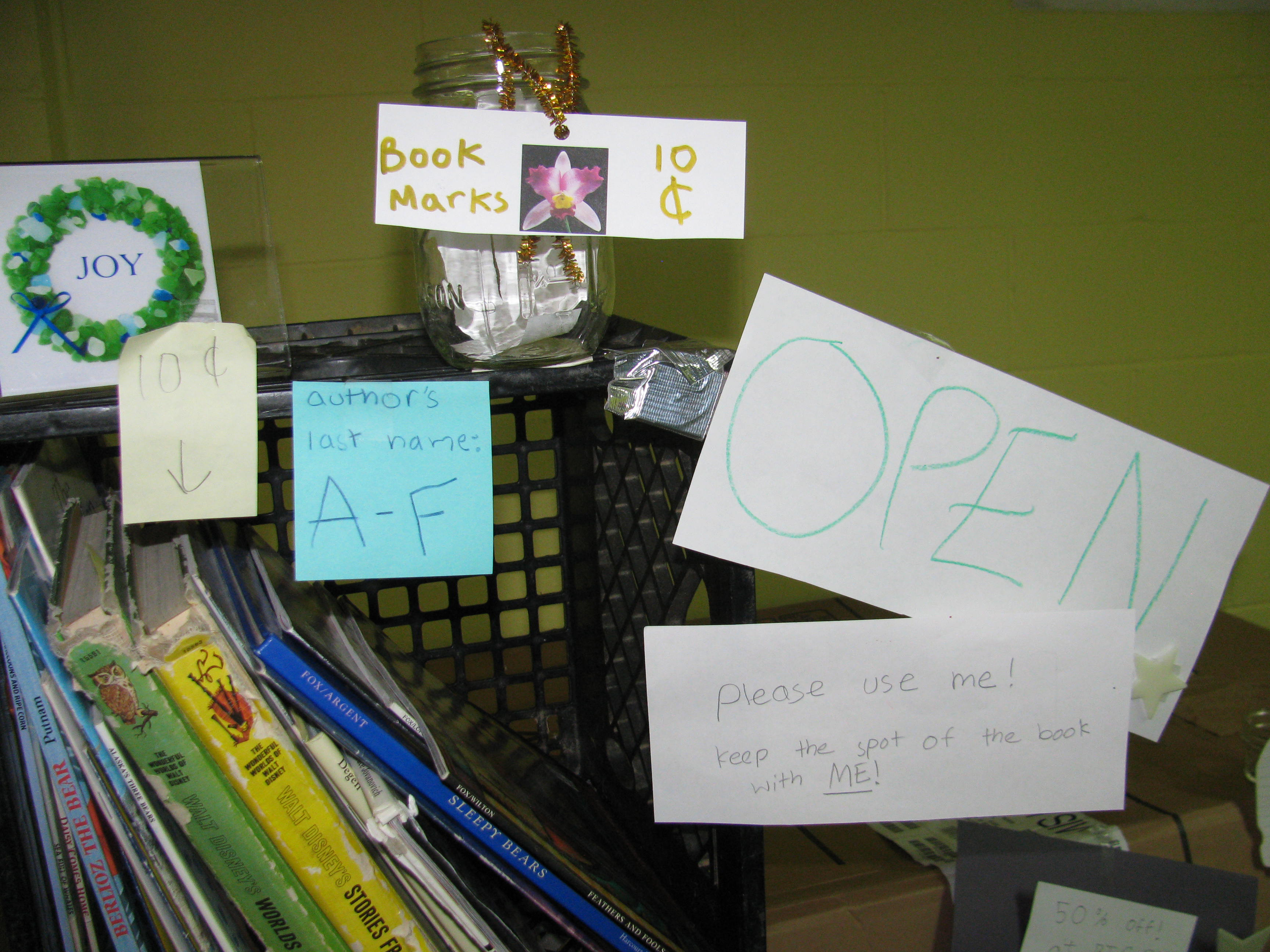 The retailers’ mom is impressed with their work. “It’s pretty amazing what they come up with… seasonal selections, staff recommendations, and a very savvy business model (you get charged money but also have to return the books —  so they can be sold again and again!”
She’s also a big fan of her mother-in-law. “Janet has done an amazing job of fostering this creative play, and her collection of children’s books (as a retired elementary educator) is certainly grand enough to populate ‘Big Books’ (and likely a satellite location if they want to expand!)”
As for me, well, I’m thinking Marco and Lucy are pretty good bets for taking on The Flying Pig when the time comes to do succession planning down the road….
(Huge thanks to Marco and Lucy — not their real names — and Janet and Abbie for letting me share the gorgeous store photos and their fabulously creative entrepreneurial story!)

6 thoughts on “A Different Kind of Big Box Bookstore”