In these challenging days, any positive action we can take feels fundamental, essential. The overwhelming tide of events we have little control over is helped only by doing whatever we can, however small, however local, to make things a little better near us. On Thursday evening, August 17, we were all still reeling from the terrible attack in Charlottesville and the escalating nuclear threats and counter-threats, so were grateful to have something inspiring to look forward to: an event with award-winning nonfiction author, Tanya Lee Stone, presenting a partial screening of the Girl Rising documentary and her book, Girl Rising: Changing the World, One Girl at a Time. The event was a fundraiser for Vermont Works for Women, a local organization dedicated to improving the lives of girls and women in our state by providing education, programming, and advocacy to create economic equality and opportunity.

We held the event offsite at the Main Street Landing Performing Arts Center, an amazing venue near the Burlington Waterfront that offers a film house among its other event spaces. After being introduced, Tanya showed the audience two chapters from the film documentary, then talked about how her book came to be. She said that, inspired by the movie, she found herself wondering how much material had had to be left out of the film. Just nine girls were featured in the final cut, but the filmmakers had traveled the globe looking at all of the obstacles to girls’ education—from poverty to child marriage to human trafficking—so they must have interviewed many, many more girls.
Stone said she cold-called the film’s creators, and their responses to her questions inspired her further. Could she tell the stories of some of the girls who weren’t included in the film? They sent her the raw footage of all of their interviews — hundreds of hours’ worth — and her research began. The result was the beautiful Girl Rising: Changing the World, One Girl at a Time. 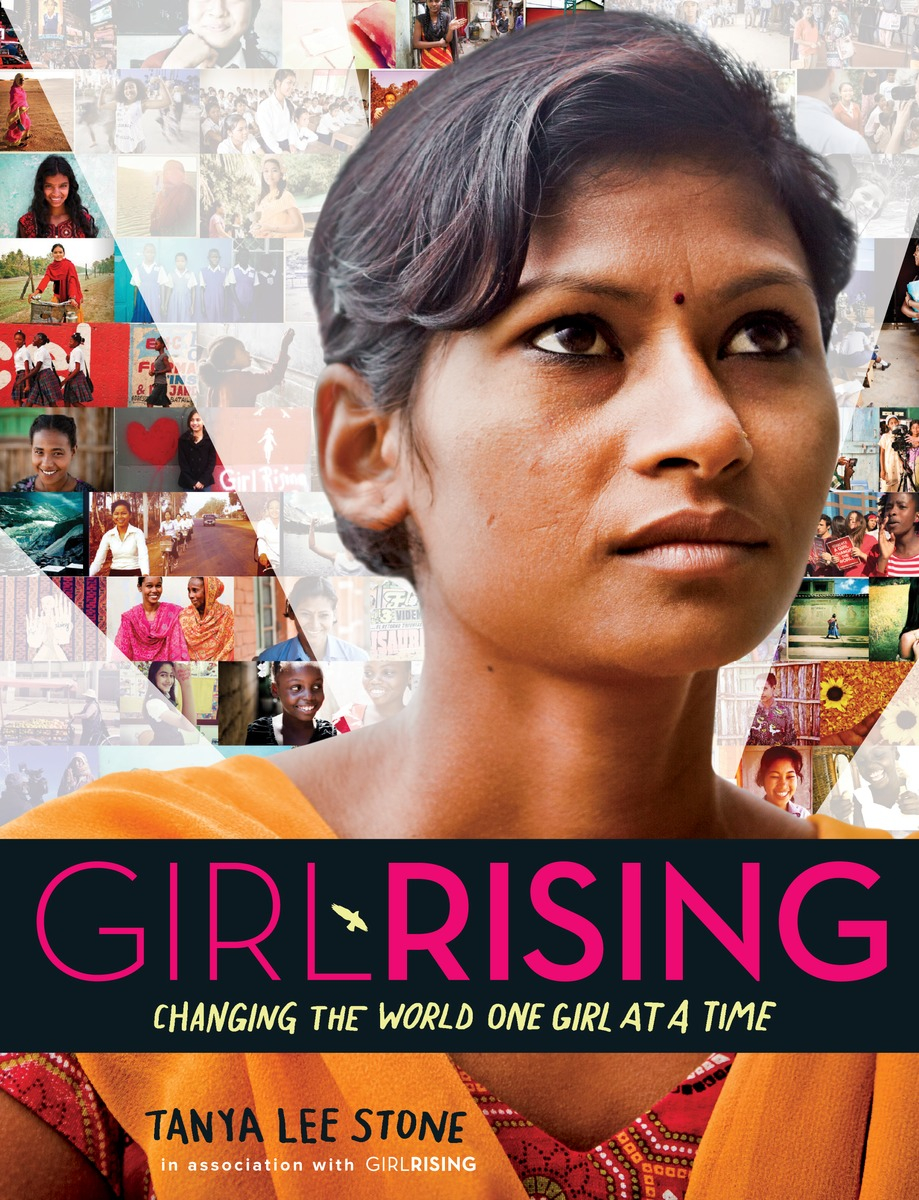 The book is powerful, inspiring, intense, and motivating. Publishers Weekly said, “Stone delivers a frank, hard-hitting exploration of why some 62 million girls worldwide don’t attend school… a vivid, heartrending portrait of resilience in the face of tremendous obstacles.” Booklist‘s starred review noted, “Much more than a companion volume to the 2013 semidocumentary of the same title… this vibrant book stands on its own as a source of inspiration… tells the girls’ backstories with empathy and grace… provides heartening updates and illuminates the context of the struggle….The closing chapter is a call to activism, and close-up full-color photos of the girls profiled will let young readers connect even more…. Readers may be moved to initiate projects of their own.“
The book itself is an act of activism: Random House/Wendy Lamb Books donates a portion of the proceeds of each book to the Girl Rising foundation, which provides financial support for the education of the girls in the documentary and their families. And our ticket sales and half of the book proceeds from the event we held go to Vermont Works for Women.
The audience was a broad mix of ages, from young teens to senior adults, all of whom care deeply about girls’ education and opportunity. VWW did a great blog interview with Tanya in advance of the event. Here’s a snippet:

When asked the question of why girls? Why education and why now? Tanya responded, “That’s easy; educating girls is the single most powerful tool we have to change this world.” She went on, “It changes the way villages, towns, communities, governments, nations behave. When a greater percentage of females in any population around the world are more educated, everything changes: the economy changes, the legislation changes, everything changes.”

Read the entire interview here.
It felt so good to spend an hour and a half together, celebrating girls’ resilience and determination, and to feel galvanized. Tanya’s presentation left everyone incredibly moved. We were so appreciative of Tanya, of the Vermont Works for Women folks, and of the Main Street Landing owners, all of whom poured beautiful effort into the event, sharing their time and talents. As my dear pal Shakespeare wrote in The Merchant of Venice, “How far that little candle throws [her] beams! So shines a good deed in a weary world.” I like to think that the young people who saw the film selections and heard Tanya speak left feeling empowered, strong, and maybe even newly appreciative of their upcoming school years. 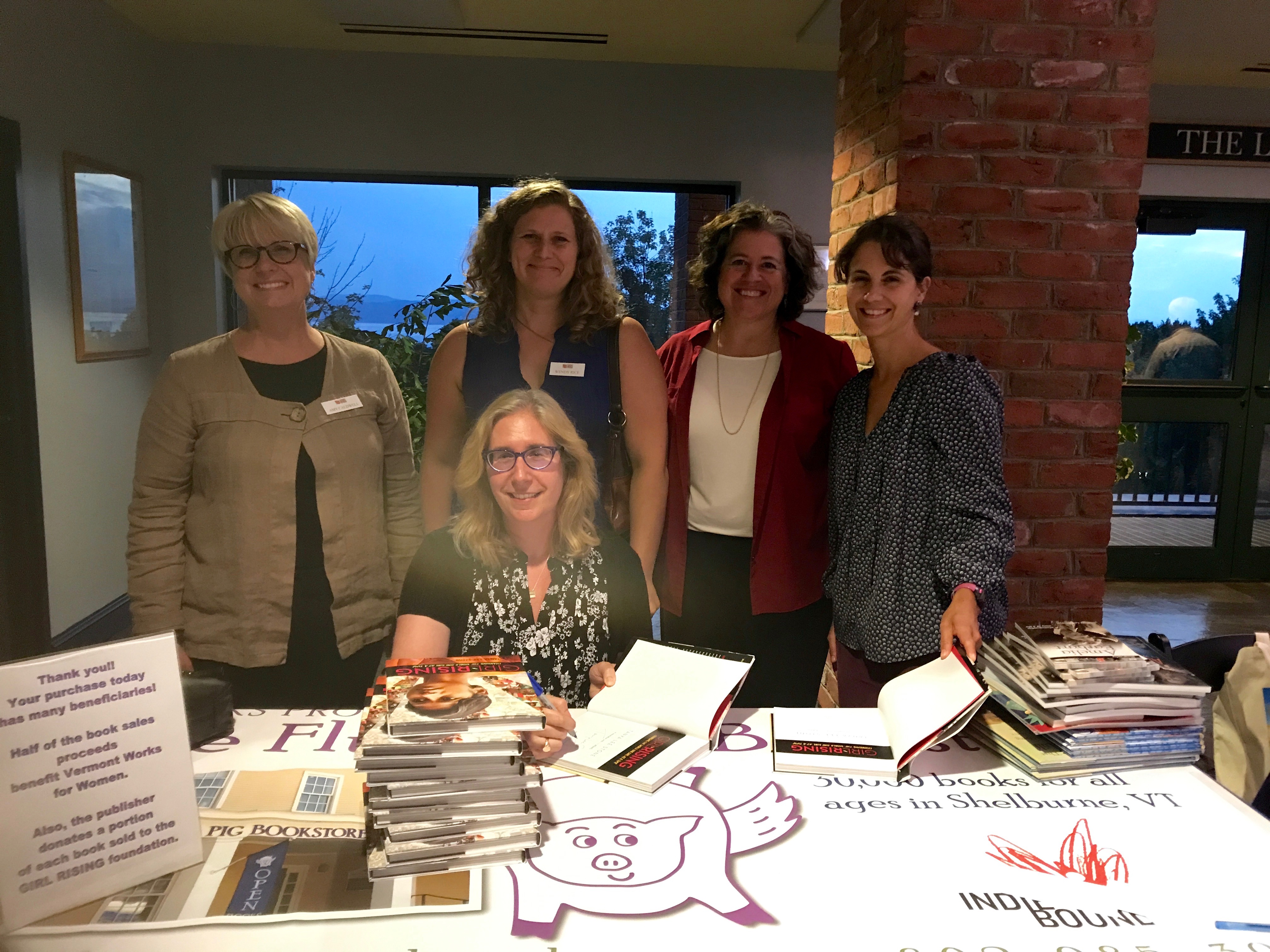 Vermont Works for Women’s Amy Caldwell and Wendy Rice and the Flying Pig’s me and Emily Copeland standing behind author Tanya Lee Stone after a terrific event!