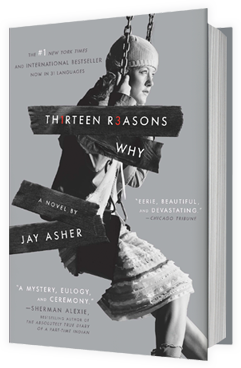 It’s a terrifying subject, teen suicide, and it’s in every newspaper this week. Our own state of Indiana ranks ninth in the country in adolescent suicide, according to the latest Kids Count report, and as high as in the top five of states for teens who have considered self harm. The release of the Netflix adaptation of Jay Asher’s novel 13 Reasons Why has created a storm of comment, controversy and concern from school administrators, counselors, parents and the media. Copies of the book, with its newer cover featuring the actors from the series, are selling more than other movie cover in recent memory or POS report. As booksellers, we are grilled by parents in the aisles: “have you read it? have you seen it? what do you think?” and kids who slide a copy across the counter, prompting this shopkeeper and mom to try to catch their eye and somehow discern in a glance whether they need a helping hand or just a bag and a bookmark.

There’s a flurry of opinions about both the book and the series on social media, and many school districts have sent emails and other communication to parents with warnings about content, and in some cases, advisories that the material may glamorize suicide, or perhaps plant a dangerous idea in the minds of a vulnerable population. Studies – both official and not-so-scientific – and pronouncements are copied and pasted and posted, and sadly, the need to judge and categorize the medium (is it good? is it bad? is it harmful?) has outshouted the issue at hand. How do we talk about scary, dangerous things with our kids and our customers? How do we offer them knowledge about the darkest parts of life, without that darkness engulfing them? And what, if anything, can we protect and strengthen them with? As booksellers, how to we continue to make every subject accessible, while still being the safe space for both our customers and the families that love them?

Last week, we invited our customers to an evening discussion promoted by Jay’s book and the 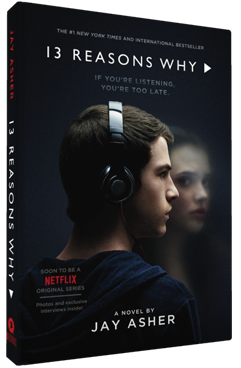 Netflix series. Our goal was just to talk, and a willingness to take the programming further if that request arose, either by engaging community experts to make more formal presentations, or to develop a list of resources as requested. We kept the invitation very general, promoting the event as a discussion, open to teens and parents, and made the time frame short, on Sunday night from 6–7, and we ordered pizza, not really sure what would happen. Some of that was more earnestness and good intentions than really careful thought – it was the day after Independent Bookstore Day, and we were tired – but it also allowed us to personally invite a lot of regulars who had visited on Saturday to eat cupcakes and attend the celebration.

If you had asked me to predict the attendance, I would have guessed we would see perhaps a dozen mom and daughter combinations, mostly of the middle school variety, and that at least two thirds of those moms were reading and watching alongside their daughters. Many of our books are sold to that customer profile – well read kids with supportive and book indulgent parents, who shop during the day while their daughters are at school, or cheer, or softball practice, and carry booklists of requests on their phones. Not a high-risk population, surely, and yet exactly the profile of the characters this book portrays. I would, however, been totally wrong. The group that attended was almost all students, and most of them drove themselves. There were only two young men, one who came with his girlfriend, and one by himself. (In full disclosure, he’s also applied for a summer job at the store, so there might have been a bit of ambition in his attendance.) Everyone had read the book, and only two (of 24) had read it after seeing part of the series. Most had read it some time ago, before they were aware of the filming of the series.  Ages ranged from 14 to 17, but high school sophomores and juniors predominated. And oh, they talked. They talked about the pressures in their lives, both real and imaginary. They talked about friends they have lost, friends who they fear for, and kids who don’t seem to have friends. They talked calmly and openly about drinking and drug use among much younger students than themselves, and how easily such choices are both made and enabled. They talked about how surprised they are at their schools responses to the series, and matter of factly about being on the front lines of the battle for their attention. They came to no real pronouncements about the quality of the show, although they all felt strongly about the book and had recommended it to others. I chewed the inside of my mouth a few times, but kept the promise I had made to myself that I would only jump in if the conversation lagged, not to prescribe or parent.

They exchanged some phone numbers, made plans to see each other at some summer concerts, and drifted out to the YA cases to browse and play with the new fidget spinners. They didn’t eat the pizza, but everyone left a little fuller.