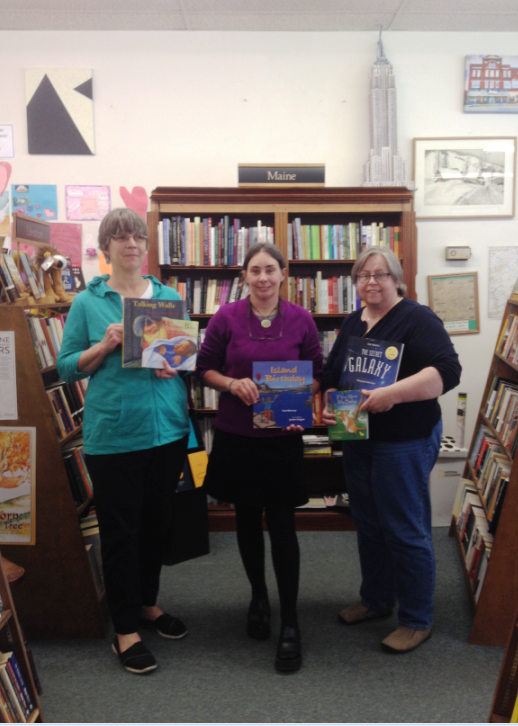 That’s Margy on the left, Eva in the middle, and Fran on the right.

As part of our Children’s Book Week events in May we had three upstanding Maine picture books authors in the store at the same time: Margy Burns Knight (Talking Walls; Who Belongs Here?), Fran Hodgkins (Secret Galaxy; Andre the Famous Harbor Seal), and Eva Murray (Island Birthday; Well Out to Sea: Year-Round on Matinicus Island)—Tilbury House authors all. Margy and Fran are old campaigners while Eva, though new to picture books, took home the prestigious Lupine Award this year. There was such a robust flow of shop talk going on that I took the opportunity to ask them a few questions before they left the store.

Kenny:  The main reason (if there are any) that out of staters should read a Maine (or Maine-authored) picture book?

Margy: I want all readers to know that we have many ways to tell stories and we should be hungry to know as much as we can about everyone, everywhere… all over the world!

Fran:  I’ve written a lot of Maine-oriented picture books and I love the idea that when someone takes home a copy of Little Loon or Andre the Famous Harbor Seal, they are taking home a souvenir that lasts longer than a T-shirt or fudge.

Eva: Maine is one of those parts of the country—perhaps like Texas, or Alaska, or New York City—that plays a special role as a sort of American icon, but with that comes a lot of stereotyping, a lot of cliché. People who have never been here or who have only visited briefly sometimes think they know what Maine is all about, and often they fall back on the same tired old standards, even down to “Ha  ha, do you even have running water?” A picture book with a Maine theme has an opportunity to broaden a child’s (or anybody’s) perspective, and to present a more well-rounded, more accurate, or more interesting vision of some aspect of Maine Kenny: The most difficult challenge you have as a picture book author on the business side of things?

Margy: For me the challenge is communication. I don’t want to learn about foreign rights via a cryptic email. Pick up the phone and make a call… something I have reintroduced to my business plan!

Fran: I think the difficult thing, as far as business is concerned, has been how hard it seems to be now to sell just a manuscript for a picture book. I’ve had agents tell me you really need to be an author-illustrator to succeed. While I understand that from a business point of view, as a writer it’s a bit discouraging. That said, though, I think for me, personally, a big challenge has been finding my own voice.

Eva:  I am new to children’s books, working primarily as an essayist, columnist, and non-fiction writer for the past 15 years. I had a lot to learn, and you can be sure I am still learning! A children’s book is much more of a collaborative effort than people tend to think. By all accounts, it is rarely the case that an author or illustrator gets to see their “dream” children’s book produced—untouched—because there’s an expert hiding behind every page! We have to learn when to take advice—which is sometimes difficult for us but often the right tactic—and when to hold our ground as artists, or as people who know their subject best. Having a mutually trusting and respectful relationship with editors and others who work on “your” project is so important.

Kenny: If you got a birthday request from your five-year-old self to read her your favorite line from one of your own books and one from your favorite picture book in general, what would they be? Margy: My line to a five-year-old is from Welcoming Babies…. Every day, everywhere babies are born and we have many ways to show them we are glad they came into the world.

Fran: One of my favorite quotes was is from Ferdinand: “His mother saw that he was not lonesome, and because she was an understanding mother, even though she was a cow, she just let him sit there and be happy.” I think of my own books, one of my favorites is from The Secret Galaxy: “Gravity holds everything together; no stars get left behind.” For some reason, I find that line reassuring, and I think the kids do too, especially after we’ve discussed how huge the galaxy is and how fast everything is moving.”

Eva: My five-year-old self was an odd kid, but that odd kid still commands a lot of “space” in my middle-aged mind. One of my favorite children’s books right now is Marven of the Great North Woods by Kathryn Lasky, which isn’t really a childish book at all, it’s a bit of American history, a true story. Marven is a young immigrant boy from Duluth who takes a job as the bookkeeper in a French-Canadian logging camp in northern Minnesota in 1918. The boy has to wake up the late-sleeping loggers, including the huge and intimidating Jean Louis. He learns to shout, “Leve-toi, Jean Louis, leve-toi!” into the massive ear. That became a one-liner around my house for a while when people were being lazy and unwilling to start the day.

A favorite line from my own book would have to be the offhand, snarky comment made by the impatient boy Riley to his friend Ruth, the postmaster, who has just shown him the “upside-down Jenny” (airplane) stamp: “I wish our mail plane would come, right-side-up OR upside-down!”