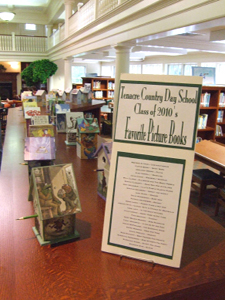 Today is my last day at Wellesley Booksmith, which has me moping quite a bit and feeling a bit nostalgic. In order to boost my spirits I thought it’d be fitting to post one of the happiest things that’s happened to me in the last month of my time here: I’ve inspired kids (and their teachers) to be artistic.

I’ve sung the praises here before of Esther Frazee, school librarian at the Tenacre Country Day School here in Wellesley, and now I’m doing it again. Esther sees each of the classes in her (very small) school just once per week, but she does so many imaginative things with them in what little time they have together that you’d think she saw them a lot more often! Most of their visits focus, of course, on choosing books and enjoying one of Esther’s read-alouds, but she often does creative book-related projects with them too — projects that I think she REALLY ought to put in a book to inspire other teachers, because WOW are they great. 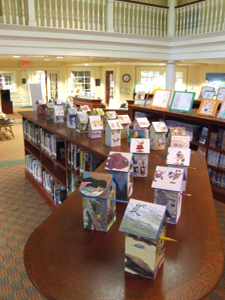 Last summer I offered a two-part workshop here at the store on making bookish birdhouses like those I’ve posted here on ShelfTalker. I had a GREAT time working with a group made up of my coworkers plus a handful of local teachers and librarians. Esther was one of those in attendance, and she did two birdhouses in the time that the rest of us each did one. (A clear indication that she’s accustomed to making the most of what little art time she’s got.)

Since that time Esther has made several more bookish birdhouses, and this spring she taught those birdhouse painting & pasting skills to Tenacre’s 6th grade class — the Class of 2010 who gradauted this spring from Tenacre and will soon be attending local middle schools. Their bookish birdhouses will remain in the library for future classes to admire and enjoy.

For this project, Esther asked each student to choose his or her favorite picture book. She then supplied the working materials for them, culling primarily from discarded library titles for the actual books. The students thought carefully about which pages they wanted to feature on each of the birdhouses’ sides and wrote explanations to be glued on the bottom of each birdhouse, explaining why they chose the book they did.

Esther invited Lorna and I to visit Tenacre’s (beautiful!) library to see the results, and we were both just bowled over by what a fantastic job these kids had done — even those who claimed they weren’t artistic.

To those of you out there claiming that you could never make one of these beauties, I offer these bookish birdhouses as proof that you most definitely CAN. Click on any of the photos below to see them larger and browse through the gallery.