Hi, designers and alert readers. It’s time to do another round-up of YA book cover trends. Last year, we saw lots of big close-ups of flowers, interlocked hands, silhouettes, faces covered by blowing hair, giant keys, and more (gathered in this post: The Season of Windblown Hair). (Last year also saw scads of black-and-white, and predominantly black/blue, covers, but I lost the cover art downloads in a tragic laptop incident before finishing that post, so you’ll have to trust me on that.) Finally, last year, there were girls in gowns. Lots of them. Lots and lots of girls and gowns,  ballgowns and Sex in the City-esque dresses and period costumes. Regardless of the time period of the books, almost all of the models looked extremely modern, which we are certain was deliberately done to telegraph to skeptical contemporary readers that, while a book may be set in the past, it is still “relevant” to 21st-century girls.

Sales of those titles must have been incredible, because this year, guess what? There are lots and lots of girls in gowns. I am a little gowned out. It’s not that the book covers aren’t attractive; so help me, they can be quite beautiful. Some of them are almost extraordinary. But the sea of similarity becomes daunting. Are readers going to bother to distinguish between those titles — the books are all so varied inside the covers, so interesting and different and worthy of individual distinction — to find which ones might resonate with them?

Since the girls-in-gowns trend shows little sign of abating, I am assuming these jackets must be effective with many readers. In our store, the teen girls complain about the sameness of covers. They often don’t like photos of models on book jackets, primarily because they don’t look like the character they imagine from reading the book. Crystal clear, close-up photos do work against the reader’s imagination. And the age of the models can be an issue. “She looks 25!” a girl might snort. But if they like the author, or the cover strikes them as beautiful, they’ll give the book a chance.

Below are some of this winter/spring’s gown covers. Major props and thanks go to Sandy First, a Flying Pig bookseller who noticed and pulled out nine of these ARCs from our galley boxes, spurring this post.

Some of these jackets are more distinctive, intriguing, effective than others. 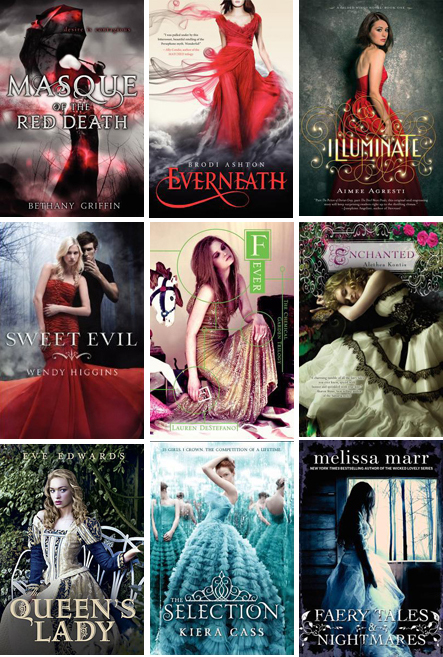 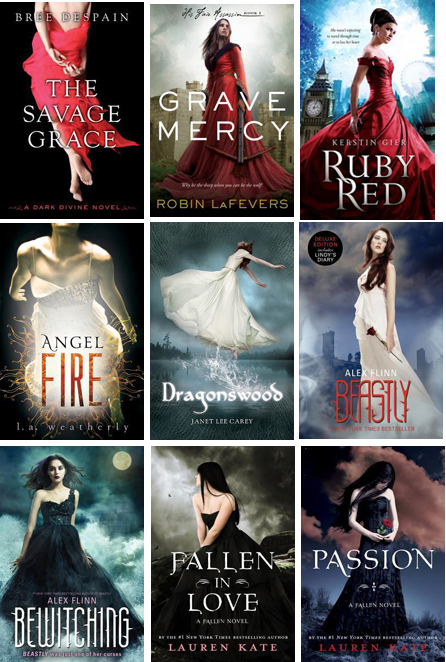 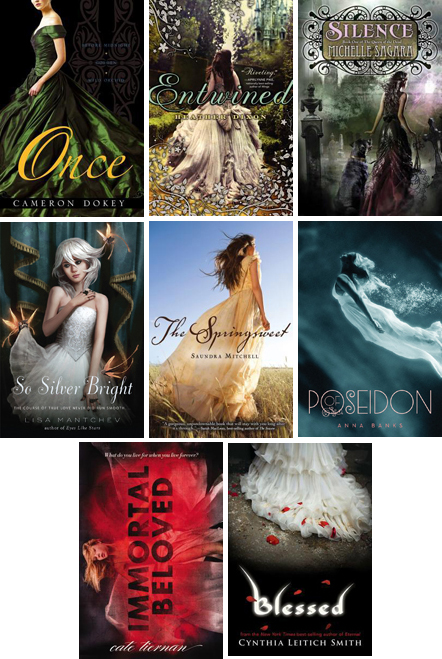 Readers, what do YOU think?

Do covers that fall into this kind of trend or pattern serve you, by telegraphing their genre and likely audience via photographic shorthand? And if so, what does and doesn’t work for you about them? Do you care about the actual dress? The model? Can a small thing turn you off, or are you willing to overlook a glitch in the cover to peruse the actual story? (One example for me from this group was the cover for Lauren DeStefano’s Fever. The first book in this series, Wither, featured a girl/gown cover that was striking, unusual in color and composition, and I really liked it. But Fever‘s cover image strikes me as very modern, a party girl caught on a bad night. I didn’t realize the two were even from the same series until I noticed the title design treatment.)

Conversely*, can a small thing also make a trendy book stand out from the crowd for you? For instance, I keep coming back to the treatment of the font on the cover of Aimee Agresti’s Illuminate (see below), with the little filigree of lights surrounding the title. I just love it. (*This is not strictly a converse statement, for those of you who care about such things. I know it and you know it, but let’s let it go for the moment? It’s getting late. Thanks.)

Are you harder or easier on book covers that fall into genre groupings? Do you judge the book more or less by its cover in this circumstance?

12 thoughts on “Girls in Gowns”