I’ll bet you folks have been thinking to yourselves, “Now that it’s 2013, when are we going to have a guest post from that clever wag, Kenny Brechner of DDG Booksellers in Farmington, Maine?” And goshdarnit, you’re in luck — we happen to have a fab contest Kenny cooked up for his bookstore as a way to um, share the wealth of some extra holiday goodies. The original contest featured general literature, but Kenny has fabricated a children’s literature version just for you alert ShelfTalker readers. And now, heeeere’s Kenny!

One of the life lessons we’ve learned at DDG is that you can’t store unsold seasonal chocolate items for a whole year. Thus it has become necessary to reveal our… 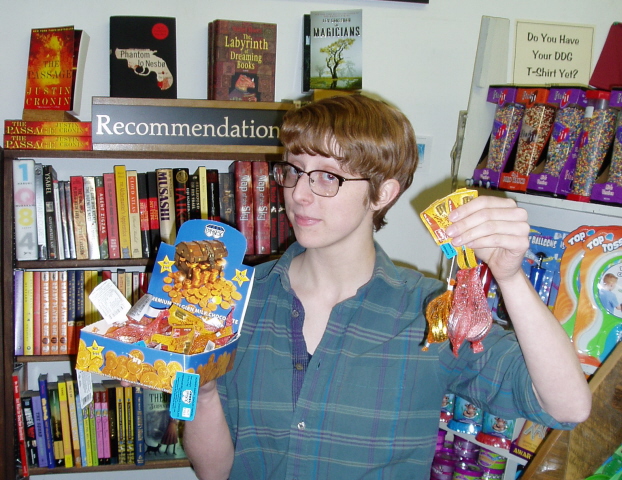 Here’s how to win: below you will find 10 famous first sentences from classic children’s books with one word in each sentence replaced with the word “gelt.” The winner will be the first to write in a comment below all ten of the original words and the book each came from without cheating too much.

And what of the secret prize? It will be awarded to the best new gelt sentence submitted by a contestant. Add yours to the bottom of your entry or by its lonesome.

Here is an example:

“Harriet was trying to explain to Sport how to play Gelt.”
Missing word: Town
From: Harriet the Spy

Now, see if you can figure out the next ten.

2. “When I left my gelt that beautiful spring day, I had no idea what was in store for me.”

3. “It was years before Christopher told anyone about his gelt.”

4. “The sky was almost black, but the gelt shone a bright blue in the moonlight.”

5. “He happened to be building a palace when the news came, and he left all the gelt kicking about the floor for Nurse to clear up – but then the news was rather remarkable news.”

6. “‘Christmas won’t be Christmas without any gelt,’ grumbled Jo, lying on the rug.”

7. “How it happened that Mr. Cherry, the carpenter, found a piece of gelt that laughed and cried like a child.”

9. “Buck did not read the newspapers, or he would have know that gelt was brewing, not alone for himself, but for every tide-water dog, strong of muscle and with warm, long hair, from Puget Sound to San Diego.”

10. “The Mole had been working very hard all the morning, spring cleaning his little gelt.”

Post your answers to the quiz AND/OR your own “famous first line with gelt” sentence in the comments! The winners will be notified by email.

P.S. Not had enough sleuthing? You can try the adult literature version of the contest here.