It wasn’t so long ago that folks in the children’s book field were lamenting a perceived shortage of terrific non-fantasy middle-grade fiction. Mysteries, adventures, humorous and realistic contemporary stories — all were being sought after by editors. Now, I think it’s safe to say, deep inroads have been made toward that goal. In the past couple of years, I have noticed a new surge of energy and life in MG fiction. At the Flying Pig, we recently had a chance to celebrate two delightful new additions to the genre by MG practitioners Kate Messner and Eric Luper. Both Kate and Eric are seasoned writers with several novels under their belts, but their recent releases mark new territory for both. Messner’s spunky Marty McGuire strikes a chord with her youngest MG audience yet, and Luper’s Jeremy Bender vs. the Cupcake Cadets is the YA author’s first venture south of the 12-and-up border. Both books are charming, funny, absolutely solid middle-grade novels with utter kid appeal. They embody exactly what editors have been looking for!

I feel the need to insert my FOA (friend of the author) disclaimer here. I know both Kate Messner and Eric Luper pretty well by now, and consider them friends. This can also be said of, oh, about two or three hundred other children’s book and YA authors. Children’s literature is a smallish field, and a friendly one, and when you’ve been in it as long as I have (fifteen years at the bookstore, three years as a school librarian before that), you’re bound to assemble a long list of pals. However, friendship does not dull my literary faculties, and you can be certain that I’m no easier on the books of people I know than I am of authors I’ve never met. In fact, any bias probably works in the other direction, since I’m vigilant (some might say, paranoid) about not showing favoritism. The books must stand on their own merit. All this is to say that if I like or love a book in this blog or anywhere else, I like or love the book, period. And now, back to the rest of the post. 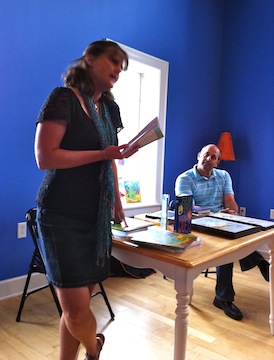 Luper entertains with Jeremy Bender vs. The Cupcake Cadets

Marty McGuire follows the misadventures of a wonderfully appealing, mud- and frog-loving third-grader (think this generation’s Ramona Quimby) who, despite her fervent protestation, gets cast as the princess in her class’s performance of The Frog Prince. The writing is so funny, and the characters so human and real and lovable; it really does make you feel like you’re discovering another Ramona. Kids are LOVING this book, and — one of the sure signs of writerly success — actually groan and whine when they hear that they have to wait until 2012 for the sequel. This is a gem of a middle-grade book! Give it to your Clementine and Ivy & Bean fans, too.

Jeremy Bender vs. the Cupcake Cadets steers right for a middle-grade boy’s humor wheelhouse. (Yes, that was sexist of me, but I stand by it.) Two best friends wreck something valuable on a preciously cared-for boat, and have to raise money — in the hundreds of dollars — to fix it before Jeremy’s dad discovers the mess. The solution? Disguise themselves as girls in order to enter a model-sailboat race (only eligible Cupcake Cadets may apply) and try to win the $500 prize, of course. What could be a mere riot of stereotypes or a Bosom Buddies rehash deepens as it broadens, sneaking in a lot of insight about life and friends and girls and boys, through the eyes of a sixth-grader. That’s Jeremy, I mean, and not Eric Luper. Although…. 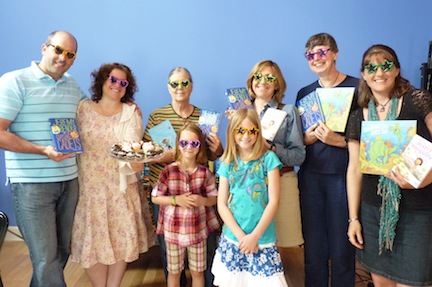 Luper (far left) and Messner (far right) and some of their fans, with celeb glasses. Photo from http://www.katemessner.com/our-cool-summer-reading-party-at-flying-pig/ 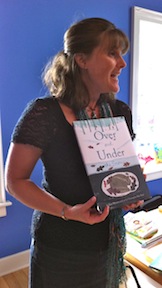 A sneak peek at Messner's gorgeous Fall 2011 picture book, Over and Under.

The great thing about having Kate and Eric to a bookstore is that they both give great event. Kate is a full-time seventh-grade teacher in addition to being a prolific and talented author and blogger and Tweeter (Josie and I are convinced she’s actually from an advanced planet), so she knows exactly how to hook a room full of kids and hold their attention. At the Flying Pig event, Kate was also presenting her recent picture book, Sea Monster’s First Day, and it doesn’t hurt that part of her presentation for that story involves an 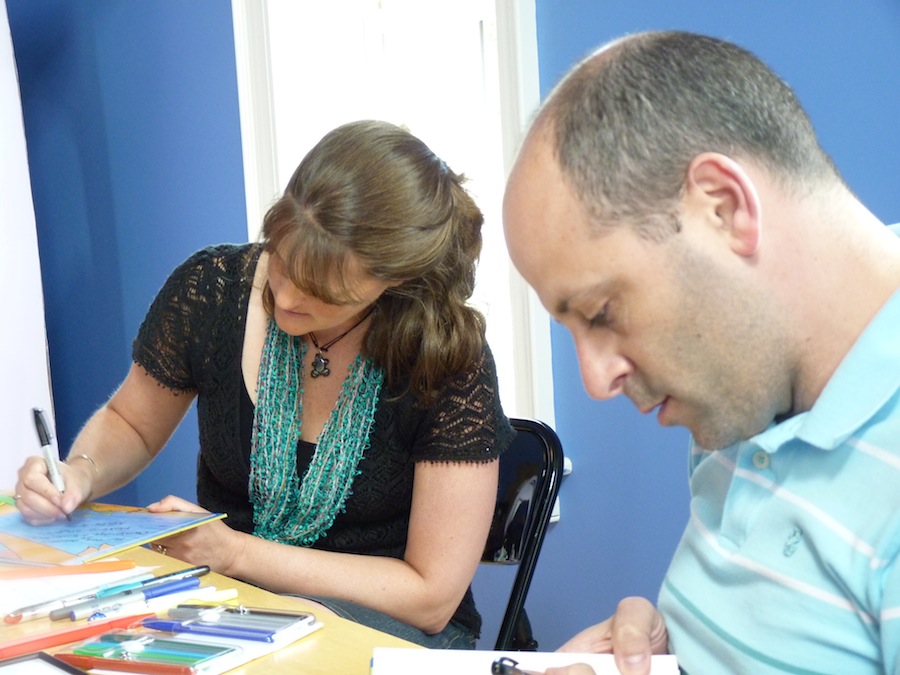 actual photo of the strange lake creature she and her family (and seventy other astounded witnesses) saw in Lake Champlain some years ago. Eric is also a gifted author. His YA novels are fantastic (Bug Boy, Seth Baumgartner’s Love Manifesto, Big Slick). He’s equally at ease with groups of kids and adults, and he gives a really funny reading. He manages to come off as both relaxed and energetic; we’re not sure exactly how he pulls that off, but it’s great for author events. He’s also really smart about book promotion and has great ideas for how to take an event to the next level.

It’s been fun for me to see the rise of a whole new crop of middle-grade authors who neither try to nudge MG into tween and teen-land nor patronize their young readers. Kate Messner and Eric Luper are wonderful examples of writers who get it right.

Who are some of your favorite new additions to the middle-grade genre?