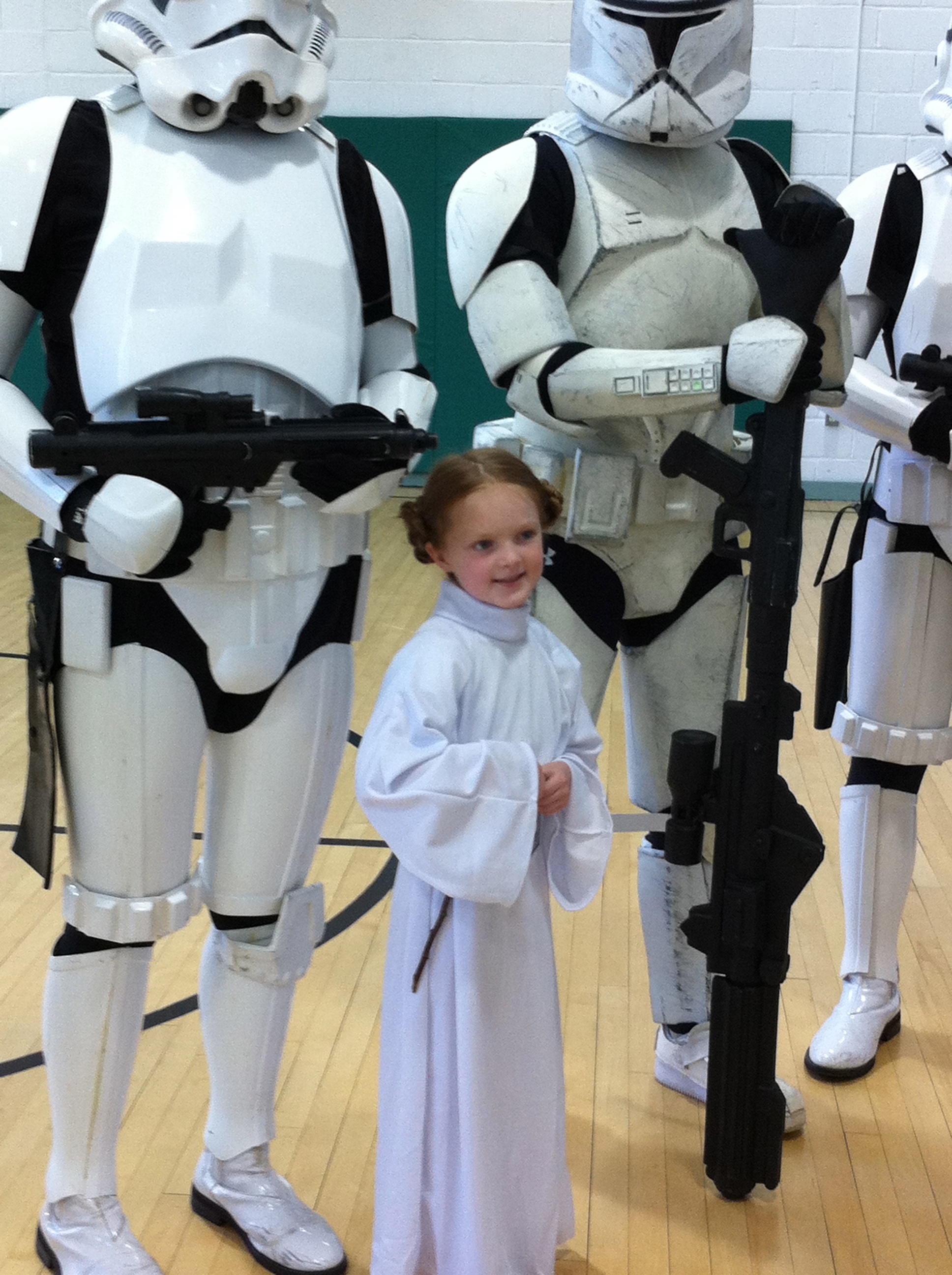 No galaxy has never seen a more charming Princess Leia.

Father’s Day was celebrated with an out-of-this world party at the Flying Pig with six Star Wars characters from the celebrated 501st Legion, a national organization that volunteers authentic role players to groups who fundraise for worthy causes. 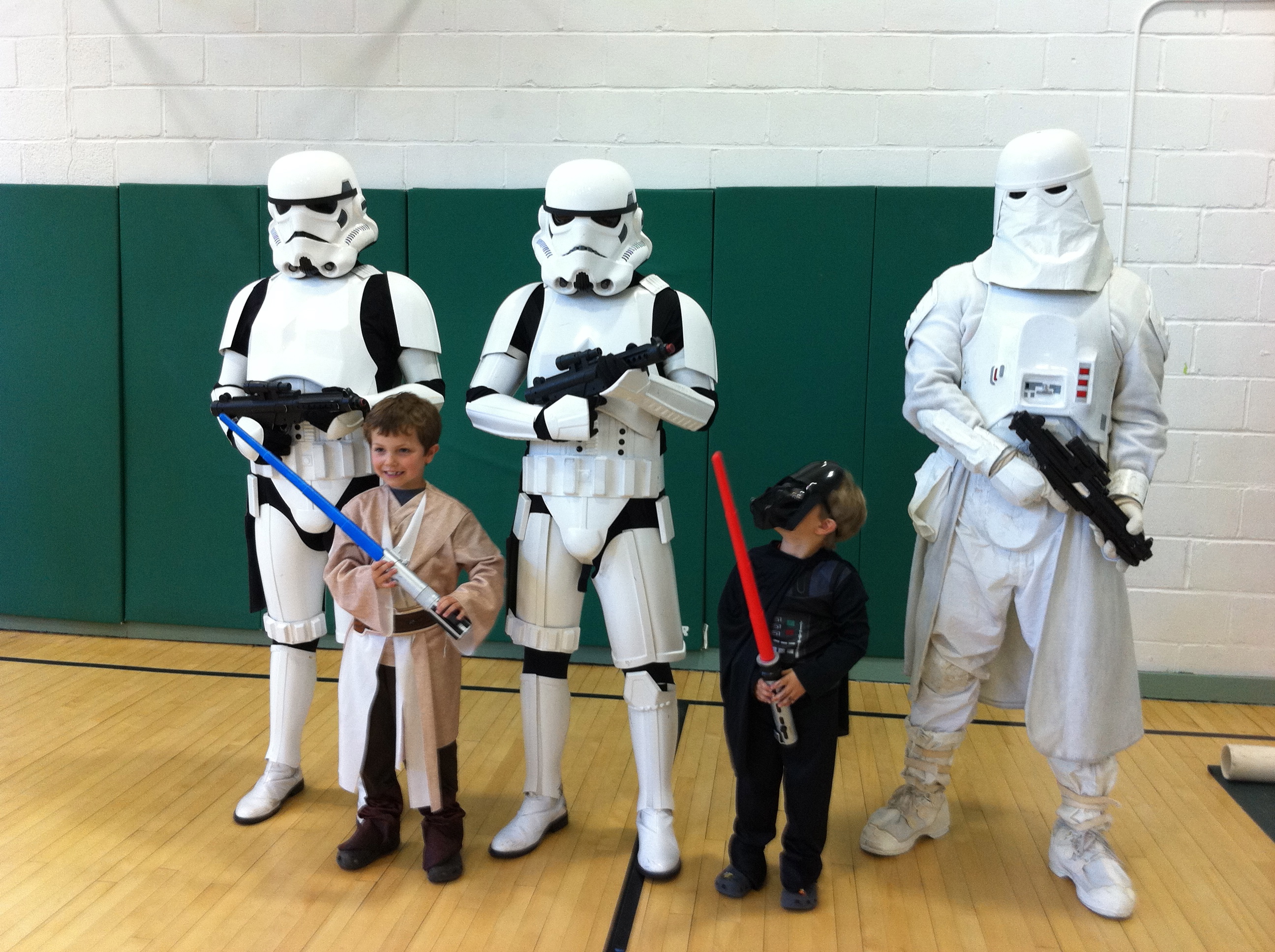 Obi Wan stands his ground; small Darth isn't so sure.

Many of the children were in costume. Some kids were ready to meet their heroes without fear, while for others, bravado quickly turned to hiding behind daddy’s leg when the full-sized characters arrived. Little Darth Vaders came in several sizes.

The members of the 501st dress in authentic Star Wars uniforms, to the delight of hordes of fans both young and grown up. They appear at movie premieres, TV news and entertainment shows, and for groups looking to do a little celebrating for a good cause. Our event was a literacy fund raiser for the Stern Center for Language and Learning in Burlington, VT. 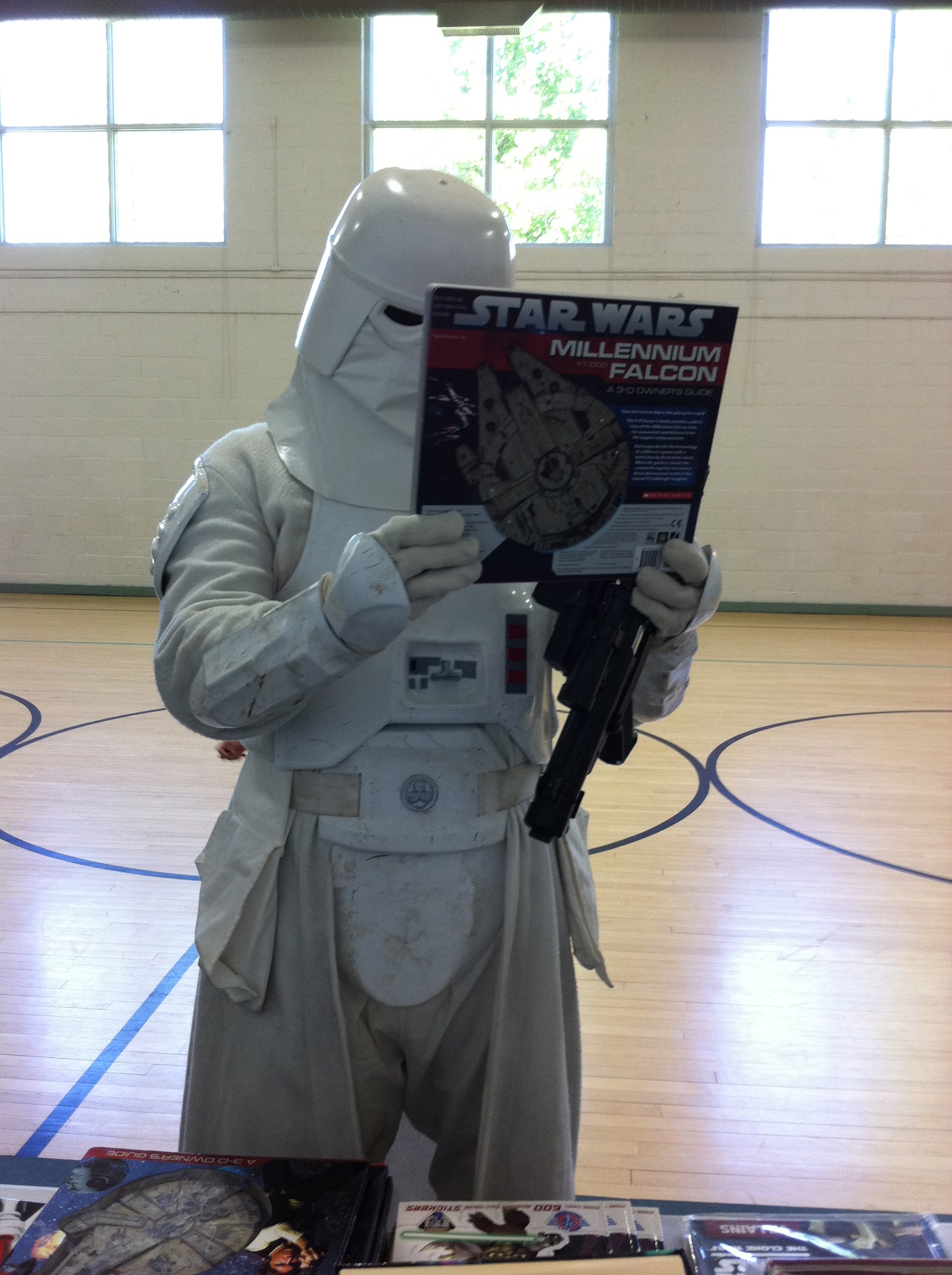 Snow Troopers like reading about the Milennium Falcon, too.

While the kids waited for the characters to sweep magnificently into the gym, they did mazes and word searches and other fun activities from DK’s great event kit. We held trivia quizzes and gave out prizes (also from DK’s kit), including keychains, stickers, pins, posters, and magnets. Needless to say, the children were ecstatic with their prizes.

Apparently, all the Troopers are readers, as well. Darth Vader was a careful shopper as were the other Troopers. Seeing the characters read was giggle-inducing every time. Later, they told us they love emphasizing reading to kids, and try to do that at every event where books are present.

How can we indie booksellers not love seeing movie characters avidly reading books?

The 501st Regiment did a wonderful job and the event was a smashing success. 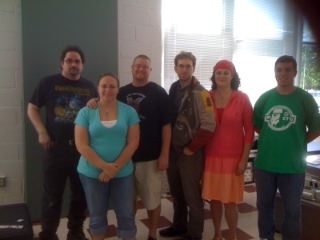 The impressive, fun, hardworking 501st members who made the event fantastic.

Here they are after the event looking a little tired, but happy. Andrew Liptak, fourth from left, was our coordinator. He helped us book the event and did his best to get more members of the New England Garrison to come with him to the Flying Pig. These folks never got out of costume once during the two hours. They worked hard, were friendly and fun with the kids (and the adults), and had a great time. We couldn’t have been more thrilled, and we can’t recommend the 501st highly enough.

(Note: Josie wrote this post, and then Elizabeth added some pictures and text. So if this sounds like both of us, that’s why. If you don’t like something here, blame it on the other one. Thanks.) 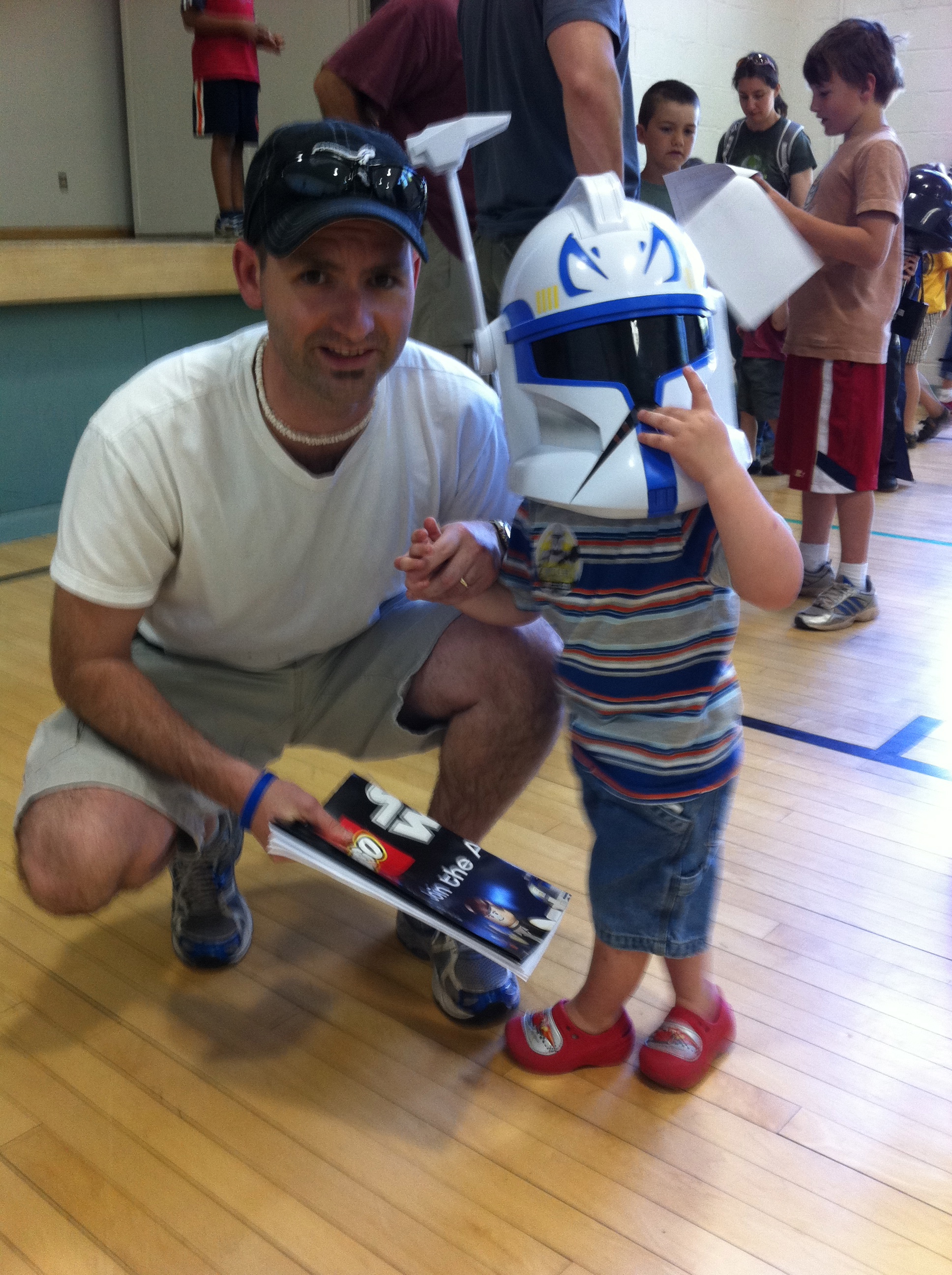 The helmet that ate a child.... 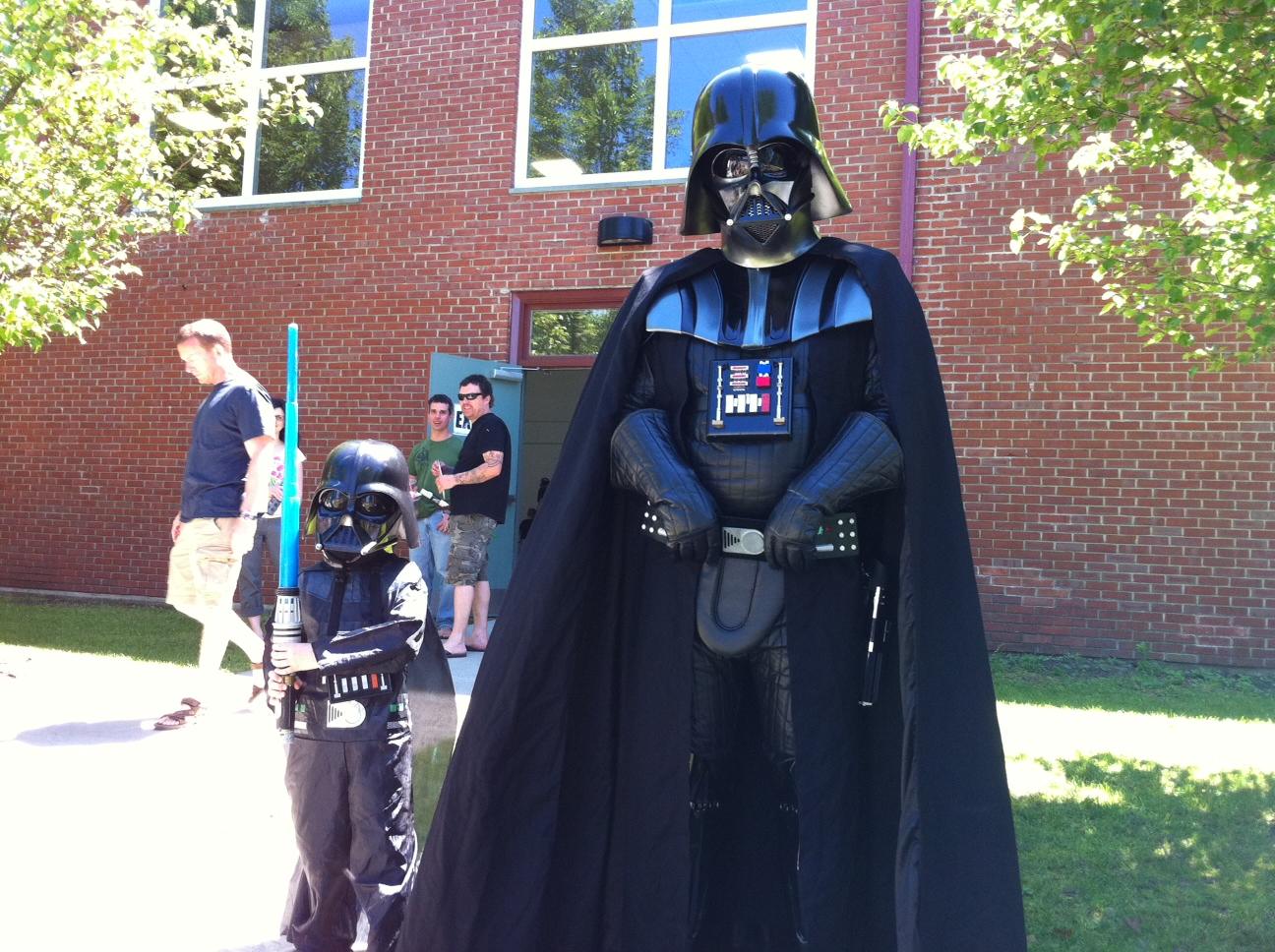 This duo literally stopped traffic when they ventured outside together.

Girl entranced by book as crowd begins to gather for the event. 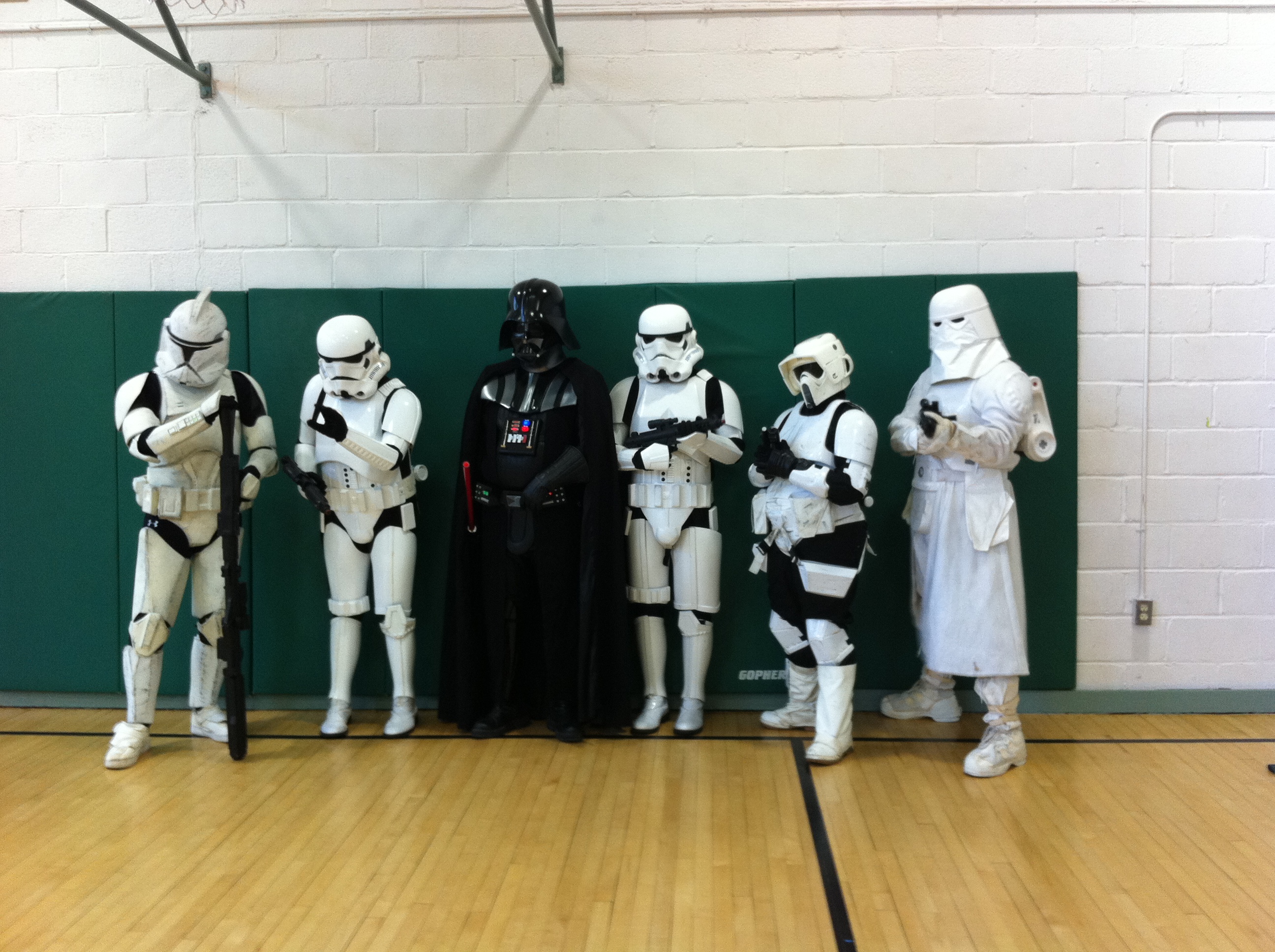 A rare moment of stasis for the crew.

3 thoughts on “Star Wars in Shelburne”