A day in the life of a bookseller, especially one at a small store, finds me wearing many hats. We’ve gotten in several 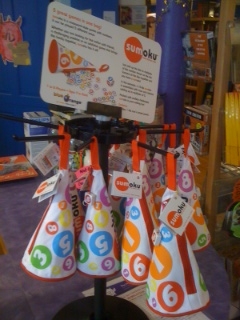 shipments of toys this week. Usually, receiving toys is Elizabeth’s domain. I don’t have the patience for it. But, she’s out of town, so I had to tackle them. You know, putting a display together is not rocket science, but there are times when it sure feels like it.

It seems each toy came with a display that needed to get set up. The first was a seemingly simple rotating four-sided block that displayed bookmarks that have motion when you move them. Adorable yes, but infuriating. There were four tabs on each side to fit the bookmark in. You would think this was neurosurgery for how long it took me to get those bookmarks in the block. It was as if my hands grew to ten times their normal size; bumbling fingers twice almost broke the tabs on the block. So, what should have taken five minutes took me twenty frustrating minutes.

The next batch of toys all had their own displays. Oh, joy, I thought, six displays to set up. The first four went great. Easy, sensible, didn’t need the instructions I didn’t have. Setting up a hanging display for pouches of toys should have come with instructions. It’s always a bad sign when I’m done putting all the pieces together and there’s a part left. The sad part comes in when I can’t figure out why I needed that part. So, I saved the part in the drawer and hope it comes in handy later. Things were going well, though, and all that was left was the header.

Putting in the header, usually a piece of cardboard that fits in on top of the display, is self-explanatory, unless you’re me. The header seemed to not only not fit, but where it is was supposed to go was so wobbly it kept sliding out. I looked and looked, and could see no way for anything to fit any better, so I resorted to a classic Vermont fix: duct tape.

Everything looks great, until it spins.