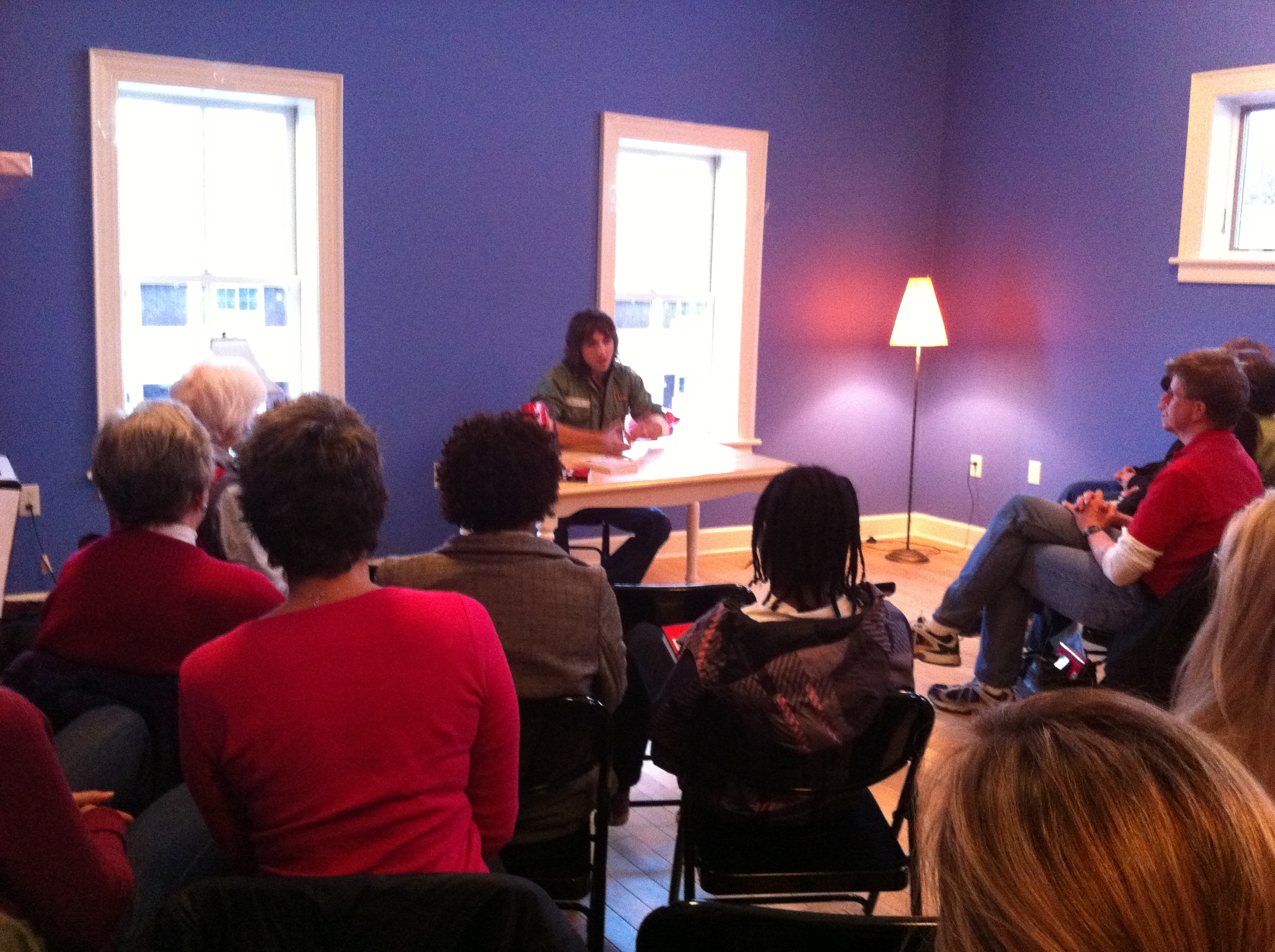 He looks a bit fragile, like a big-eyed, appealing teen from the 1970s, longish hair and army jacket not quite enough to mask the slimness of his frame. This youthful quality is partly what makes 28-year-old Nic Sheff (Tweak: Growing Up on Methamphetamines; We All Fall Down: Living with Addiction) such an easy author for kids to relate to, but what really grabs them is his openness about his years of struggle with addiction, his recovery, relapses, and hard-won recent years of sobriety.
Before his evening visit to The Flying Pig, Sheff speaks to 150 high school students at a nearby school. He tells them how uncomfortable he had been in his own skin as a kid, and how that feeling of ugliness found a temporary (and false, numbing) relief through smoking pot. He shares with them how the desire for emotional escape led him to seek other drugs, including meth, his first experience with which made him feel like a superhero — and how he spent the next six years trying unsuccessfully to feel that way just one more time. The kids are transfixed, silent and on the edges of their seats as he outlines those dark times and the rays of hope that occasionally penetrated them. Reading, Sheff says, helped him realize he wasn’t alone in feeling like a freak. Writing helped him understand how and what he was feeling. Sheff tells them that rehab was not what he expected; there was no instant pot of gold at the end of the rainbow, and he wasn’t “cured” after his 30 days were up. He was drug-free, but with no idea how to live in a world without his usual crutches, without the tools he had relied on for years. As a very young man, it was hard for him to envision a social life without any drinks or drugs. He felt like his life was over, and so he tested his limits with alcohol and other substances he hadn’t had trouble with before. Surely, he thought, he’d be able to have a drink or two like a “normal” person. But of course addiction is a tricky beast, and his brain and body being what it is, he wasn’t able to be “normal” with any mind-altering substances.
After years of ups and downs, progress and failures, injuries and near-death experiences, great patches of his life spent scrounging and stealing money to feed the fixes, Sheff was finally able to put all the pieces together and find a rehab program and method (including being responsible for a beloved crazy rescue dog) that has worked for him for two years now. He looks forward to his upcoming wedding this summer, and says he’s never been happier or felt more grateful for his life. And that it’s still hard, every single day. This is the story he shared with the kids, and with us at the bookstore that evening, too, and it was one of the most moving events we’ve ever had. There is something so honest about Sheff’s delivery, so thoughtful and open in his expression. He doesn’t place blame or dodge responsibility; neither does he self-flagellate. Instead, he simply shares his experience as clearly and directly as possible, and there’s something almost revolutionary about being in the presence of that kind of open-eyed, open-hearted sharing. Even when the occasional audience member asked tough questions (a police officer at the school talk was fairly confrontational with him, and an attendee at the bookstore evening asked him some questions that seemed aimed to needle), he handled himself with amazing grace and an impressive amount of respect and tolerance for the questioner.
One of our customers who came to the evening event just posted on our store’s Facebook page: “Thanks for bringing Nic Sheff to town; what an amazing human being and inspiration he is!!”
Booksellers, we wholeheartedly recommend these compelling books — and their equally riveting author — and hope you have a chance to share them with the high school teachers and librarians in your communities. Here is a young man who talks about very real issues of drug use and abuse without glamorizing them for a single second. As someone who’s been through so much and come out the other side—with the scars and ongoing challenges to show for it—he has so much to offer students who are locked in their own cages of moderate to severe self-loathing and unease. For school districts uncertain about inviting a former drug addict to speak to the kids, all I can say is, Nic Sheff is the opposite of a bad influence. He might even prove to be a life-changing speaker for some kids in need.