We’ve all heard of elves. Some of us believe in them, and others choose not to. I am a believer. While I’ve never actually seen an elf, I know they are real because every December, something wonderful happens at the store. I leave and go home and when I come back in the morning whole areas of the store have been transformed. Almost nightly. It’s weird.
I come in every morning and I have to take a long look around to see what magic the elf has done during the night. Recently, one morning I came in and the entire front part of the store had been rearranged. Not just a little bit changed, but a lot, like every single shelf of our three sections for gift ideas and stocking stuffers. I have to admit something, I know the elf. Her name is Elizabeth and I’m blessed to have her as my partner at the store.
You see, we’re total opposites: I get to work at 8:30 every day during the holidays and she comes in later, staying well past midnight making it look great. All elves need space to work, and wholesale rearranging cannot happen during the day. Recently, we got a huge shipment of stocking stuffer doodads. As I received them, I kept wondering where all these things were going to go. I looked around the already full store and just scratched my head and took some aspirin.

I came in the next morning and voila! Beauty had not only won out, but now 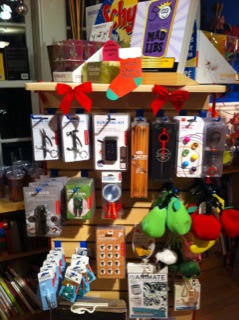 all these lovely impulse buys were clearly visible and easy to reach. 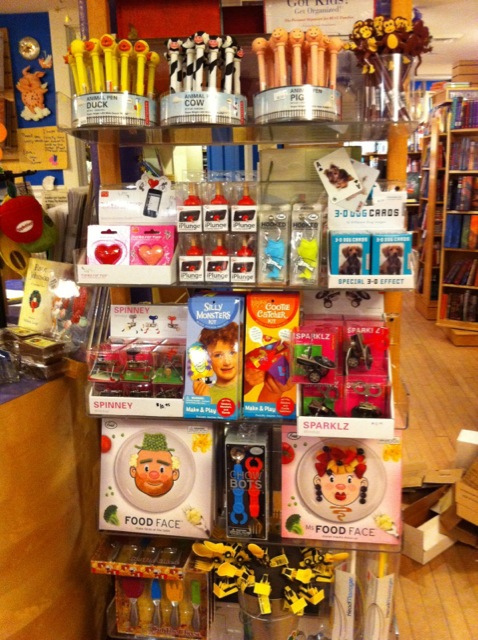 Silly things like light-up duck, cow and sheep pens sell quite well in a rural state. It’s amazing what folks will buy if they can actually see it. This might be the one lesson I take away from all of this: if folks can’t see it, especially the smaller, non-book items, they’re not going to buy them. The amount of work it took to set these displays up is actually a little mind-boggling. First, the old display had to move (how it’s all been incorporated into the store is a mystery to me) and then everything had to get placed. But it’s not that simple, because as anyone whose set up a display knows, it’s seldom right the first time, or third.

One of the things elves do well is sense what might sell well. On the left, there ar

e plates with a man’s face and a woman’s face on them, and they’re designed to have the diners playing with their food. At first I thought, seriously? Plates with faces? Well, they’ve been out a sum total of two days and we’re almost out. People are buying them, not for their children, but for gifts for friends or for their own use at cocktail parties. Wow, smart elf — and she’s friendly. I’ve even got a picture to prove it.

I wonder what she’ll do tonight?

5 thoughts on “A Holiday Elf”