Today was the first day of school in my household, which means we had three other days this week not filled with summer camp or any other pre- 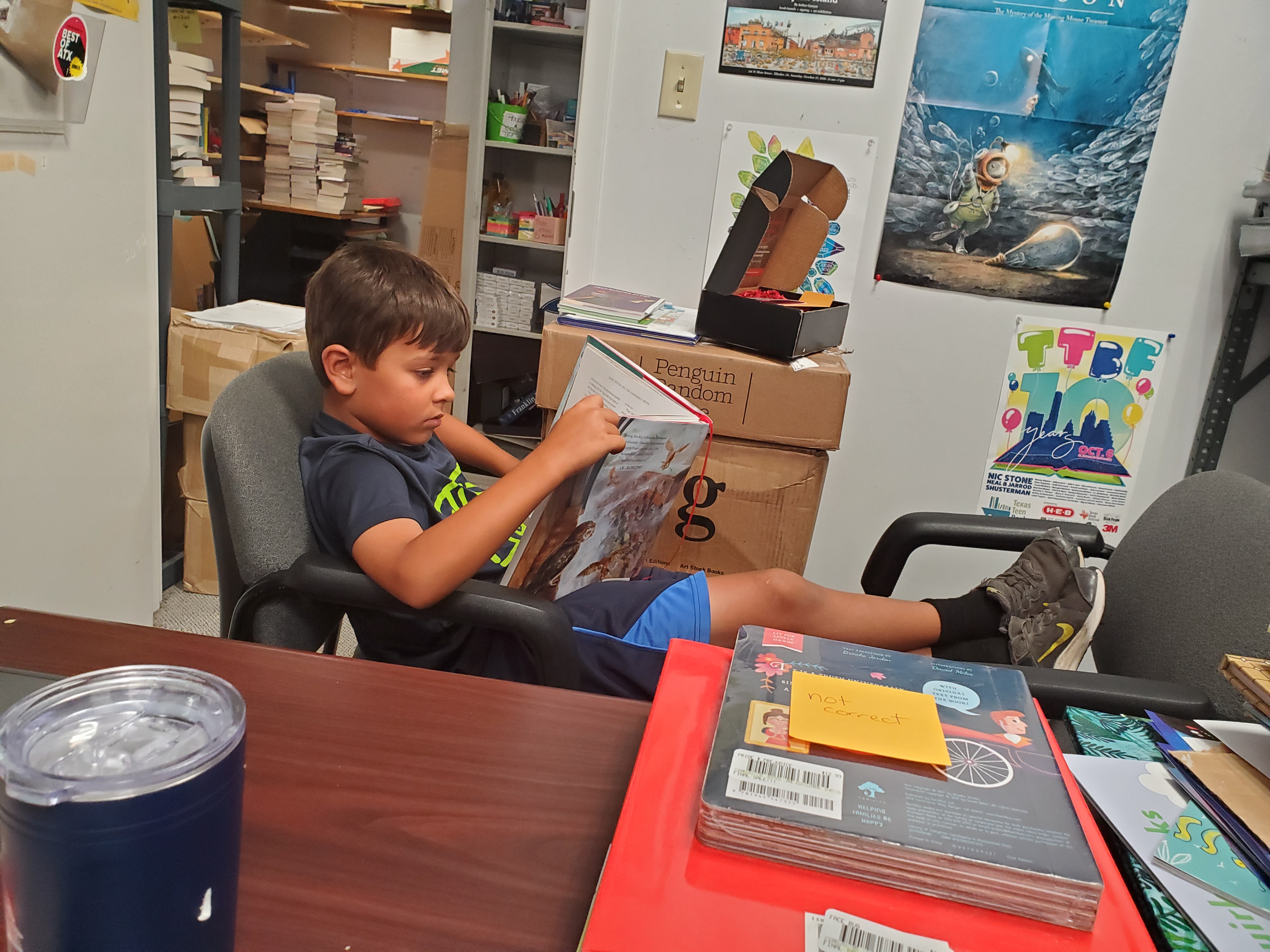 programmed activity for my incoming second grader. With my husband out of town for work, he agreed to come down to the store with me for a few days. The truth is he actually looks forward to it. He gets to read all day, we get to go out for lunch, and they serve chocolate milk in the café. It’s really not such a bad life! That being said, while I did work a little bit from home this week, he still put in about 18 hours at BookPeople, which isn’t nothing. Of course it didn’t hurt that he was here the week the newest Dog Man came out. Thanks, Dav Pilkey!

Staci, BookKids Inventory Manager, had the same situation with her seven and 11-year-olds this week, so it made me think about the life of these (not entirely voluntary) second generation 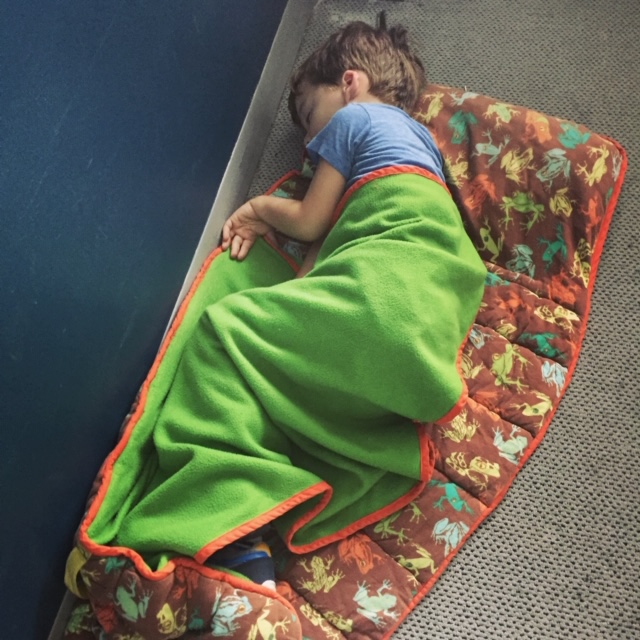 booksellers. On the plus side, bookstores are great places for kids to hang out. We welcome kids into the store on a daily basis, so it’s not exactly disruptive to have a few extras around—and there’s no shortage of reading material to entertain them. On the flip side, whiling away six well-behaved hours in one spot isn’t on the list of top 10 favorite activities for most kids. So what’s a kid to do when their parent hauls them to the store for the day? We have a lot of parents on staff at this point, and we all benefit from our store’s kid-friendly work environment, so I decided to find out what some of the other booksellers’ kids have to say about their time here. The consensus? Sure, we put them to work sometimes, but they also get to grab a nap when they need one, discover a good book, or sometimes even get into character. 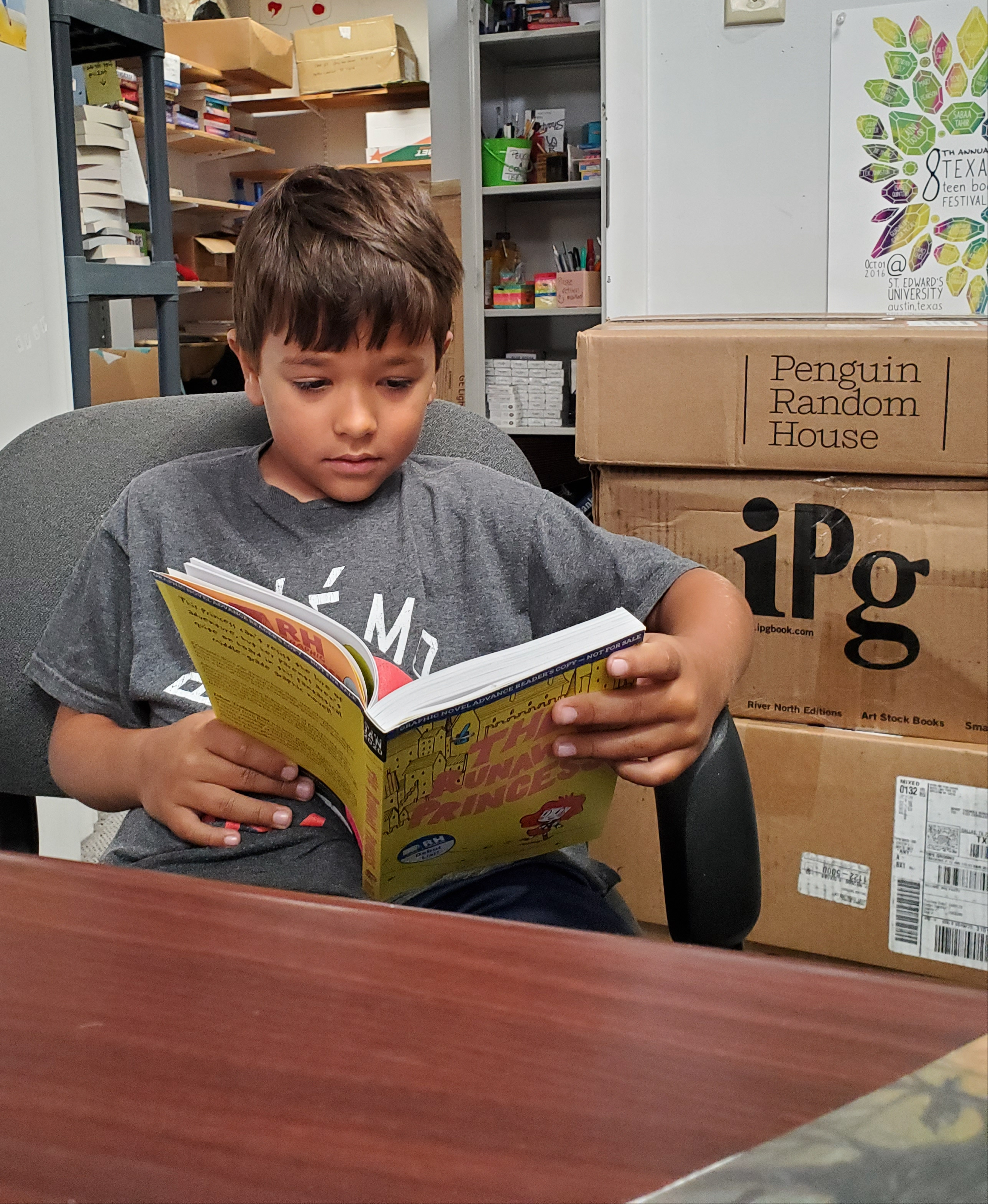 Worst Part: “Too many hours.”

Second Worst Part: “People who want to talk to me.”

Best snack: “Chocolate milk from the café. The muffins are good, but they’re too humungous.” 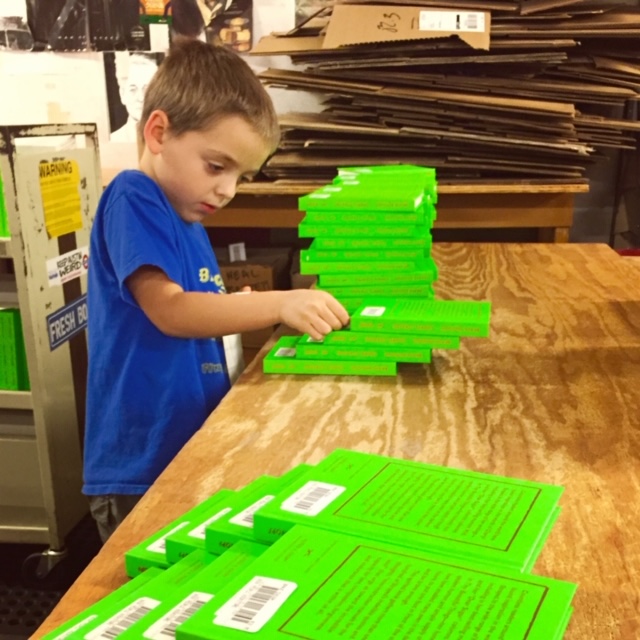 Oliver: “I like that I usually get to see a lot of people and new books. The downside is it’s sometimes hard to entertain myself, but then I can just find a book to read and that’s nice.” 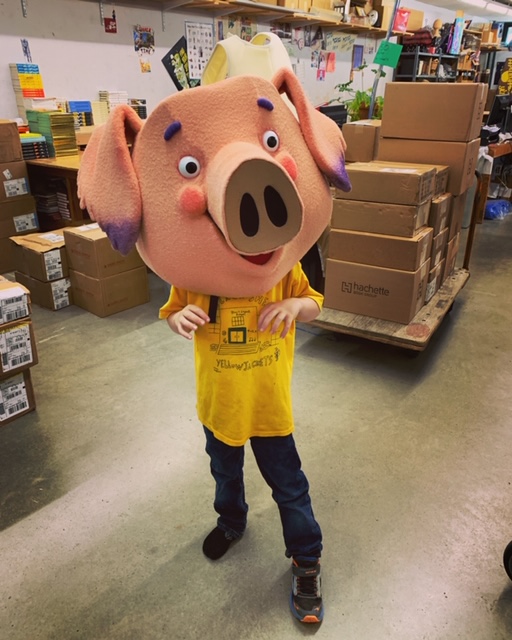 Oliver: “I try to help out when I’m here. I like labeling books in receiving. I like to check out the broken toys across from Cassie’s office (BookPeople’s gifts buyer).”

Henry: “I like to look around and see if there’s anything new that has things I like. Like a Pokémon book. Once I found Mercy Watson’s head and put it on and it was pretty silly but I couldn’t see very clear out of it because I wasn’t big-enough-headed.”

Oliver: “That’s surprising because you have a really big head.”

Elizabeth: “Oliver, do you remember when you thought the freight elevator ate your dad?” 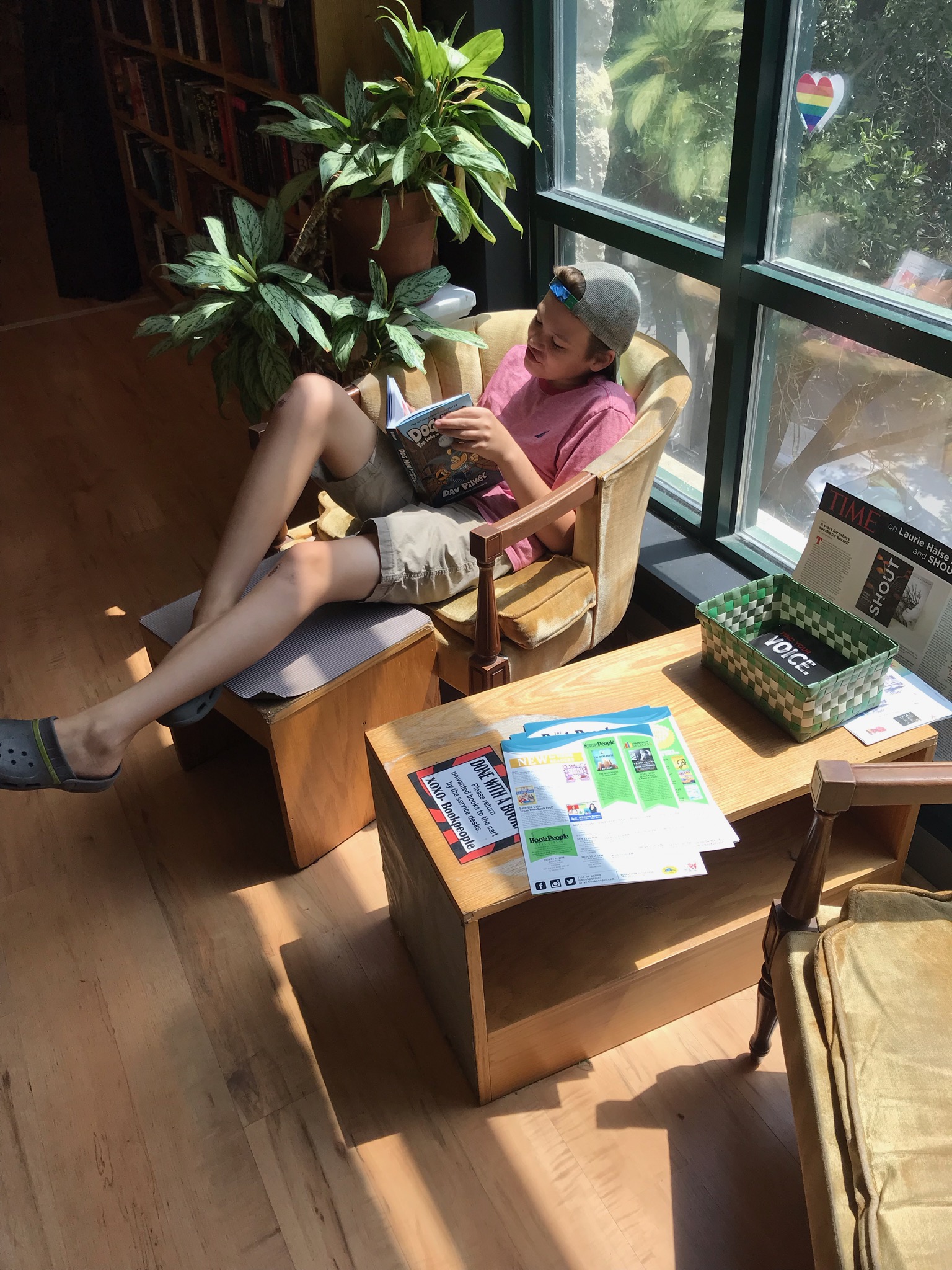 Favorite book discovered: “Well, there are a few, but I don’t think I remember. But anyone can discover new books at BookPeople. It’s really great there!”

“What do I do when I’m there? I read. Catch up on books, and sometimes help my mom with inventory!”

Thomas was actually our store’s first official BookKid. His mother Merrilee just celebrated her 25th year as a bookseller, and he spent countless hours with her at the store as a kid. He must not have minded too much because he decided to never leave. The first book he ever actively tried to recommend to customers was the first Harry Potter the year it came out, and now he’s now one of the best handsellers on staff! Looking back, he says, “I have two favorite stories about my time before I worked here. The first was the time my mother volunteered me to be a costumed Wild Thing about half an hour before an event. I didn’t know what I was getting into, and because I tried to be an actual Wild Thing instead of a friendly kids’ book character. I made a 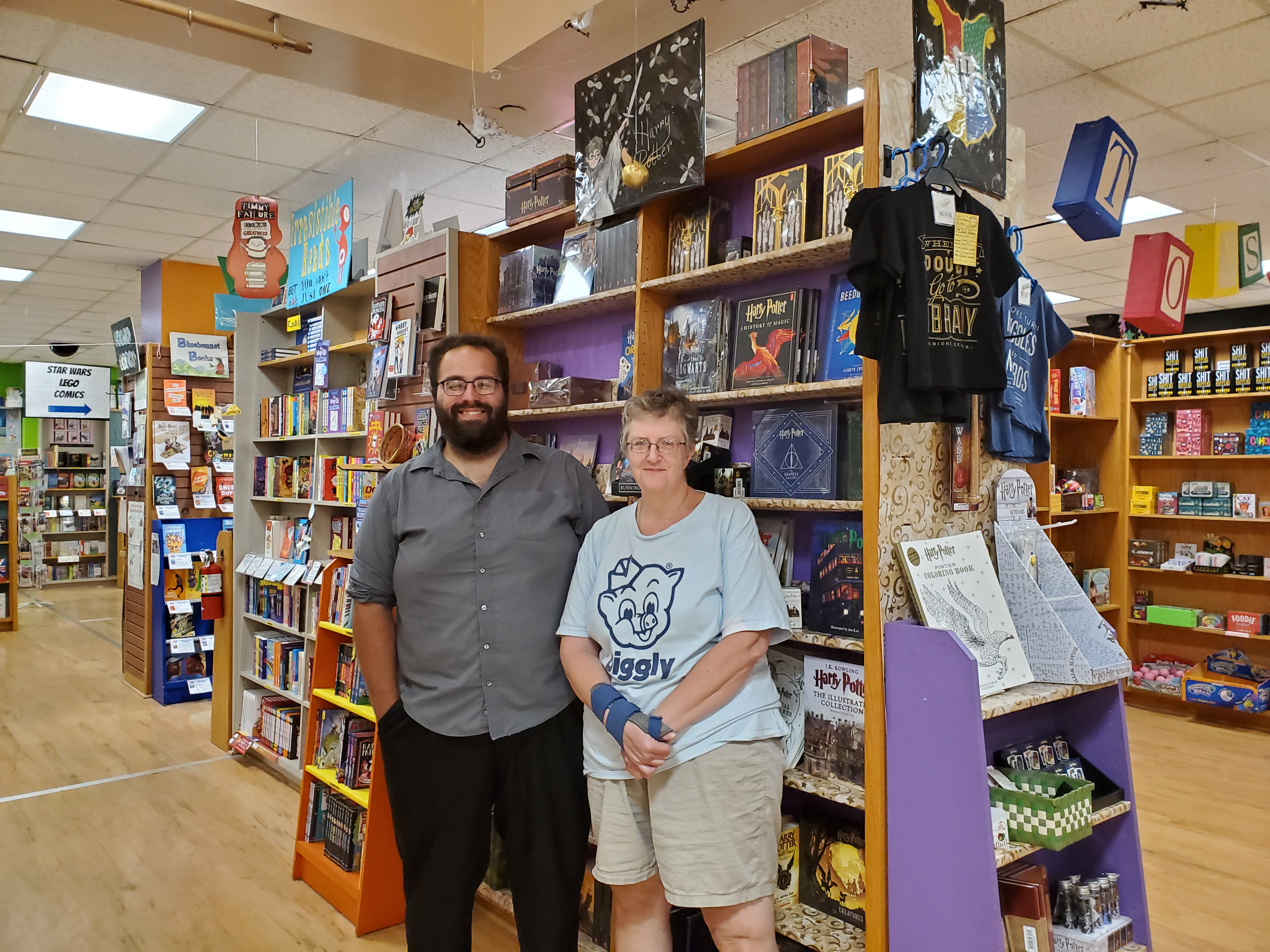 “The other was the summer I was 12 where I ‘worked’ here for the first time. I was put to work scouring the “no finds” list and I got paid a quarter a book and lunch three days a week. I was 12 and it was a treasure hunt, honestly it was a lot of fun.”

NOTE: the “no finds” hunt for a quarter per book is also his mother Merrilee’s favorite story, but she claims he earned approximately 25 cents over a three-year span—a tally Thomas hotly contests, insisting he earned least a dollar!

The truth is that Ziggy didn’t give me any answers to my questions, but his mom says, “I love coming to the store with Ziggy! It means a lot to share this place with him—both the people and books. When he was younger our visits were all about coming to hang out with the booksellers—he definitely 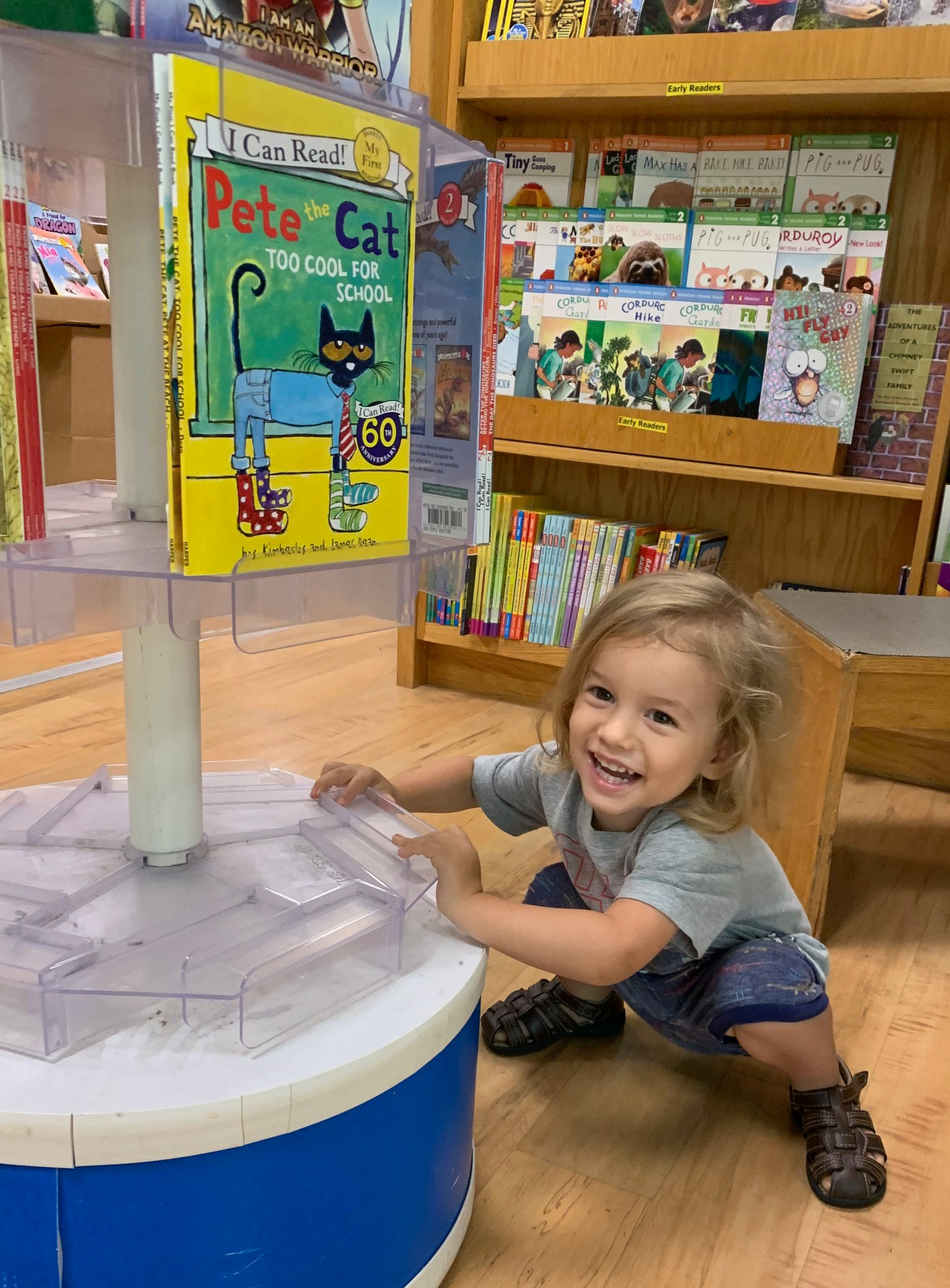 becomes the center of attention.  When he was a little over a year old, I remember [bookseller] Savannah teaching him to knock on doors and say “knock knock,” which he would do anywhere and everywhere for months after!

Now that he’s a bit bigger, he’s starting to be more engaged when we come for storytime, which is exciting for me. He will run around the tunnel in the amphitheater and try on the fireman hats for sure, but he’ll also sit still and listen to about one of the three or four books being read.

It’s definitely different recommending books in the kids’ section now that I’m a parent, having that anecdotal experience. But even more meaningful is when other parents recommend stuff to ME when I’m up there. It makes me see our children’s section in a whole new way.”