Avin Domnitz, former CEO of the American Booksellers Association and co-owner of Schwartz Bookshops in Milwaukee, told a great story in his infamous “2% Solution” workshops about bookseller profitability that has stayed with me since before I opened 4 Kids Books in 2003. I attended BEA in both 2001 and 2002 as a prospective bookseller, and signed up for all the educational offerings from the ABA (this was long before Winter Institute, but around the time that our friends at Paz and Associates began offering their highly valuable prospective bookseller workshops.,,, which I planned to attend, but a new baby and three other young children kept me homebound. Donna Paz, to her credit and my eternal gratitude, sold me a workshop manual that she shipped TO THE HOSPITAL and offered coaching over the phone… this, my friends, is how small and connected our bookselling community can be) and once I was mobile again, I took entire yellow pads full of notes about running a bookstore at every industry event. My husband carried our newborn around the show floor at the Javits Center, and brought her to me every two hours to nurse on those folding chairs that they stationed against the black draping curtains at the end of each aisle – wait! I was going to tell you about Avin’s story. (Do remind me to tell you, however, about ALL THE FREE STUFF that my husband Steve got at BEA that year, as he strolled the aisles with a newborn strapped in an infant carrier… and to this day, he believes that all bookseller events are just swag opportunities full of nice people who want to hold your children so that he can go to the men’s room. Actually, they are.)

So, Avin would recount a lovely tale about a staffer at Schwartz who built a giant spiderweb in the children’s department of his store, in an homage to E.B. White’s classic Charlotte’s Web. The web was suspended from the ceiling, and extended over all the bookshelves and story time space, a true marvel to behold. The bookseller who designed the giant web took weeks to execute its construction, and reported early to work each day to repair small damages and add to its spidery glory. Schools sent classes by the busload to view the installation, and it was a remarkable feat of both engineering and imagination, and the launching point of many a story time event. Avin’s point in telling this story, however, was to illustrate how flights of fancy in the bookstore can take over our staff’s imagination, time, and energy. Sadly, sales analysis of the children’s department in Schwartz showed no increased volume or profit from this remarkable attraction, yet it clearly cost valuable staff time and payroll. His wise counsel, while acknowledging the poetry and romance of this delightful effort, was to pay attention to the things in our stores that drive revenue, make payroll, and keep the lights on.

Avin, of course, was right. He was also, however, a lover of all things imaginative and heroic, and I like to think that he was watching over me last week, as I, too “built a thing” in my store. The 50th anniversary of the Apollo mission and landing on the moon seemed to be one of those events just MADE for children’s bookstores, and I kept thinking about ways to commemorate the NASA vision and inspire our young readers. A couple of Google searches later, I discovered that the Glencoe Public Library had built a space shuttle out of egg cartons some years ago, and so a project idea was born.

We began posting requests on social media for our customers to drop off their used cardboard egg cartons at the store, and I taped out a six-foot diameter shape on the floor of the event room. “How hard could this be?”  I thought, as I picked up a couple of packages of glue gun sticks at Target, and promised the staff that I would just do this little construction project “after story time, before you even miss me on the floor.” 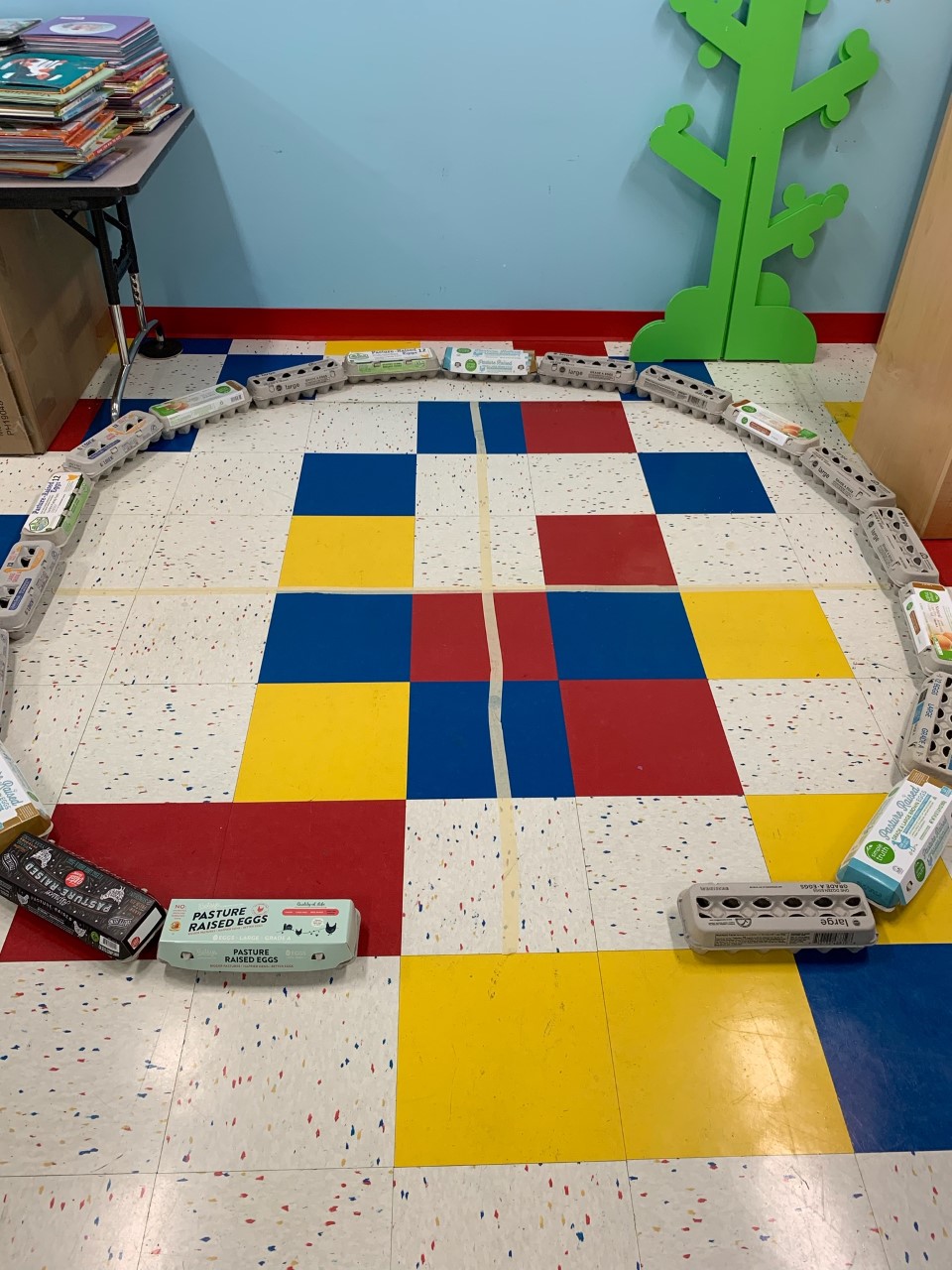 Egg Cartons and Masking Tape… this is a snap

Two things I learned right away: first, it takes A LOT OF GLUE GUN STICKS to cover a circle this large, and second, we were going to need some structural reinforcement. We recently did an event with kids creating their own masks, so we had a lot of tongue depressor-sized sticks in the craft cubbies…. and an architectural plan was born. Layer upon layer of egg cartons and wooden sticks stacked up, and more egg cartons were begged, bought, and donated from our vendor at the local farmers market. 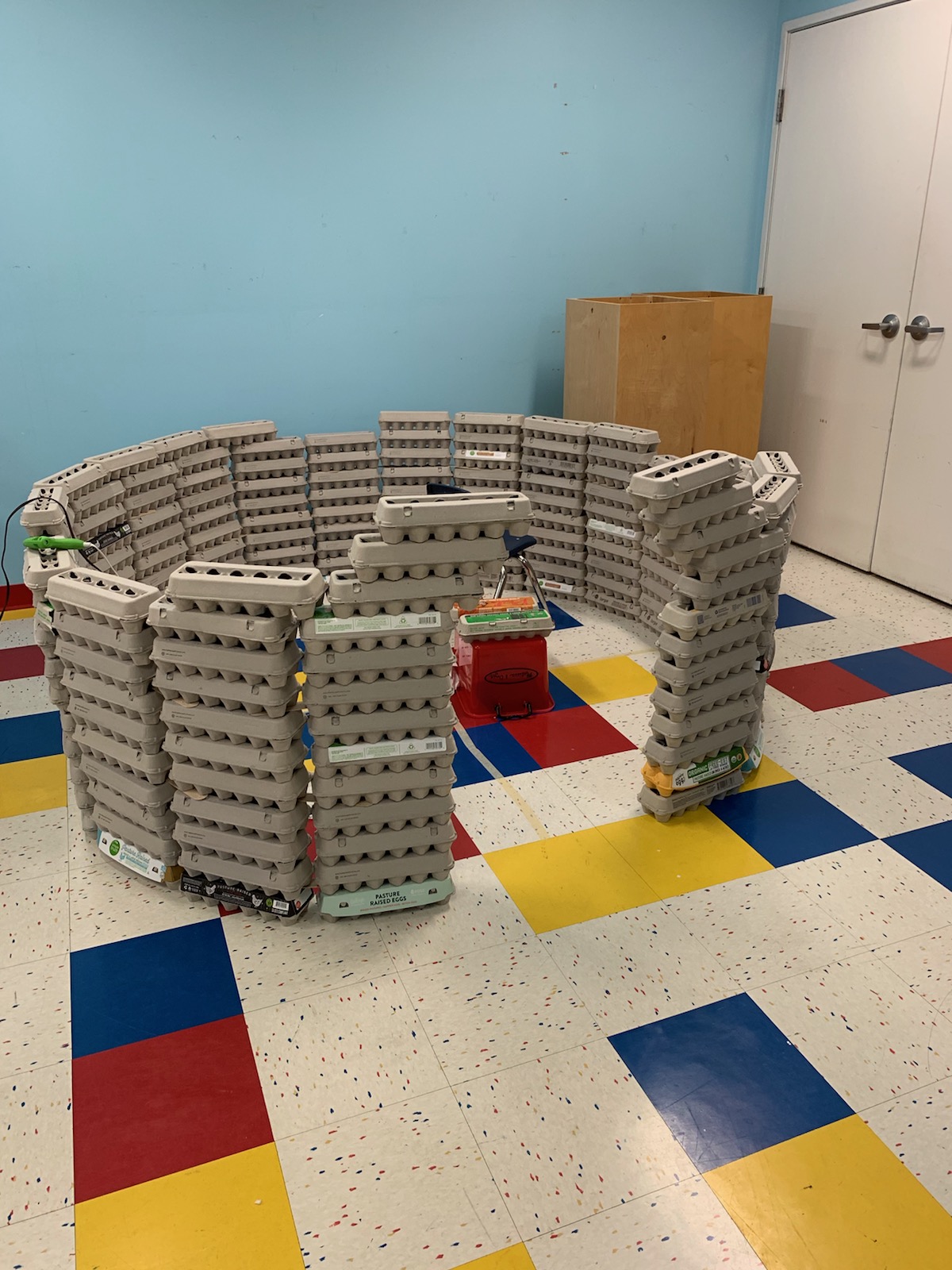 This is so easy! Can someone pick up some more glue sticks, please?

By Friday night (we started on Thursday afternoon) we were well above shoulder height, when the reality of weekend programming met our artistic vision…. we needed to MOVE the structure so that the local Gymboree class could accommodate their expanded Friday numbers of new registrants. While our structure was happily stable in place, the move caused a collapse of ALL of our towers of cartons, and we began again with a slightly-less-balanced structure at the opposite end of the room. We quickly discovered the value of staggering cartons on each layer, and with additional glue guns in hand, off we launched into Shuttle 2.0. A weekend of gluing, and the discovery of CLEAR CARTONS for the cone (much less weight, much more light allowance) and soon we were up to nine feet of height… and out of cartons. While I’m not sure that NASA ended construction this way, I am pretty confident that our satisfaction in completing the structure rivaled that of Neil Armstrong’s as he bounded down the ladder to the lunar surface some 50 years ago. 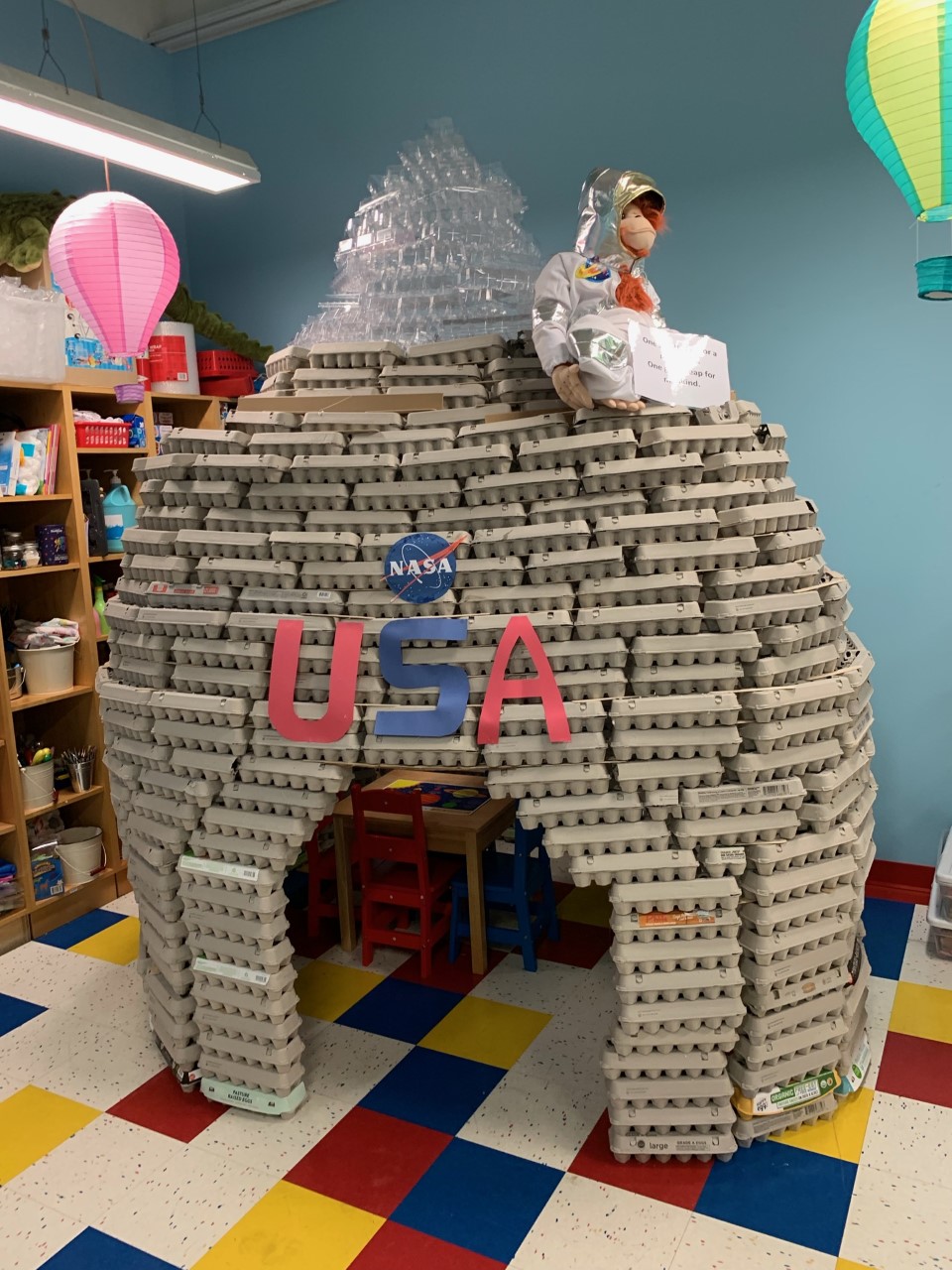 New location, better anchoring, and lots more cartons… and SO. MUCH. GLUE.

Our weekend has been full of space-themed story times, crafts, play and conversation, just as it has at every bookstore that I follow on social media. Our event room has been full of pretend astronauts, who have played under the watchful eyes of parents and grandparents sharing their own memories of this historic event, and their dreams of space travel. And as I think back to my mentor, Avin, I remember that while he cautioned us to “keep our eyes on what creates profit” in our stores, he also reminded us to dream, and to dream big. And so, dear Avin, here’s to you. To infinity, and beyond. For every child we meet is a future astronaut, a future bookseller, and all of our future hopes and dreams. 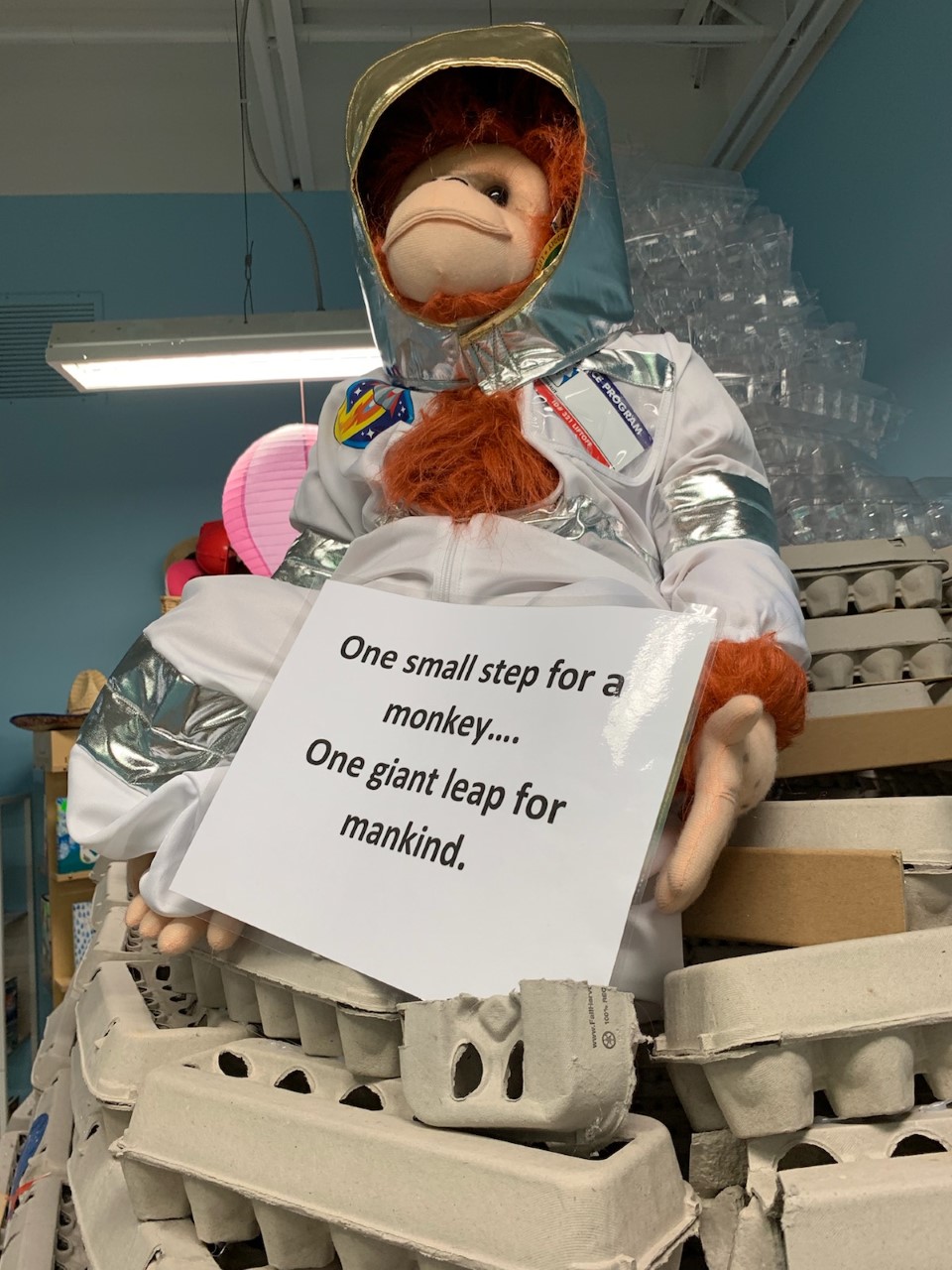