Bill Palizollo of Northeast Publishers Reps has a different style and presence than any other sales rep I’ve worked with. Bill, a book industry veteran of 41 years, owned a bookstore for eight years,, from 1977 to 1985, and then turned to a life of commission repping. He is a book person to the core though his gruff, Friar-Tuck-waiting-for-his-first-cup-of-coffee demeanor lacks all the literary affect in which the rest of us are immersed. His frankness, honesty, humor, sneaky moral compass, and uniquely acerbic professionalism make Bill a rep I both respect and enjoy spending time with. I decided  to put a few children’s book-related questions to him for our edification.

Kenny: If you were going to write a children’s book under a pen name, what would your pen name be and what book would you write? 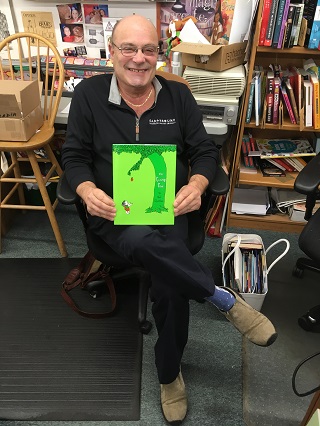 Bill: Ha! Maybe “Grumpy Grandpa” would be fitting. If I had any writing talent at all, I would probably like to write a fantasy similar to the Redwall series. My oldest son was having trouble with his reading skills when in the second grade. His teacher started reading the Redwall books aloud in class. My son then insisted that his mother and I read it to him at home, which we did, but not enough to satisfy him. His reading skills suddenly improved immensely and he read the entire series on his own. He ended up getting a degree in English Lit.and currently enjoys collecting signed first editions of his favorite authors. Teachers matter!

Kenny:  Something children’s booksellers should do that they often don’t?

Bill: Children’s booksellers sometimes (surprisingly to me) do not take the time to look closely at samples and blads. They often rely solely on Edelweiss. Many good books are missed because of this.

Bill: Publishers should make sure to have samples and/or blads available for every new picture book, and galleys for every YA book. Again, publishers, like booksellers, are becoming too reliant on Edelweiss when it comes to picture books particularly. As the song says, “there’s nothing like the real thing, baby.” Publishers should be sending these in advance of a rep visit.

Kenny: Something children’s booksellers do that they maybe shouldn’t? 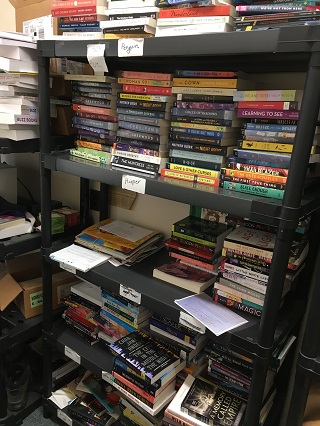 Bill: Some booksellers complete their orders on Edelweiss before a rep visit, which is great, but too often they do not want to review the order with their rep before submission, which is frustrating as the rep often has blads and samples to show which can better determine what titles to buy or not to buy.

Kenny:  A great bookstore story you are  willing to share?

Bill: Having just graduated from college, and with no particular plan in mind, my parents bought a bookstore which they asked me to run until I figured out what I wanted to do with my life. I had never run a business, let alone a bookstore, but jumped in and did my best. After a few years I thought I had it figured out and was pretty happy with myself. After eight years of running the store I was offered a job as a commission rep and found it appealing, and left the bookstore for life on the road. As I was calling on bookstores I began to realize how much about operating a bookstore I didn’t know, and how much better my store would have been if I had actually known what I was doing. My advice is to get out of your store and visit as many successful bookstores as possible to see what you can be doing better in your store.

Kenny: Your favorite kids’ book as a child and as an adult?

Bill: As a child of around 12 I remember a book about famous battles throughout history. I don’t recall the title but I remember my favorite chapter was called “Omaha Was the Tough One.” It was, of course, about the D-Day invasion. As an adult I would say Shel Silverstein’s The Giving Tree. I was a new bookseller when I first read it and I remember being quite moved by it.