My Book Expo started out in a noteworthy fashion. Following two days of ABA Board meetings in Westchester, virtually the entire ABA brain trust nearly suffocated to death in a van en route to the New Yorker Hotel. There were 13 of us Board members in the van along with CEO Oren Teicher, Senior Program Officer Joy Dallanegra-Sanger, and Senior Program Officer Dan Cullen. The only executive officer not in the van was CFO Robyn DesHotel.

The van’s air conditioning was not working. It was very hot and humid out. There were no windows that opened, and we were stuck in serious traffic. After an hour and a half of shop talk and chatting, conversations began to shift to the recognition that we were drowning in sweat, couldn’t breathe, and were well positioned to expire in a van whose resemblance to a Viking funeral ship was increasing every minute.

As it turned out, no one died. You are probably wondering if this was a brilliant, diabolical scheme by Robyn to remove all obstacles to her total takeover of the ABA. Well I have my suspicions but the matter is still under investigation.

Wednesday morning started out with joining a group of my fellow children’s specialists in The New Yorker lobby and then heading over to the offices of the Penguin Young Readers group as part of ABA’s Meet the Editors program. Even though none of us were from New York, there was no possibility of not reaching our destination because my chum Cathy Berner of Blue Willow Books had an iron organizational grip on the group. Her “no bookseller left behind” credo insured that we triumphed over all navigational issues and arrived on time. 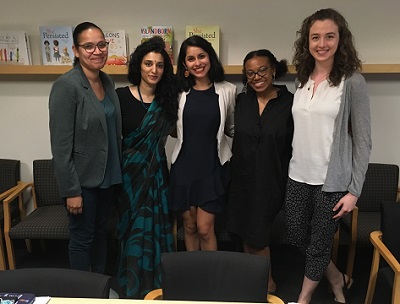 You might be wondering whether the PYR presentation offered a better experience than Tuesday’s highlight had, nearly being asphyxiated to death. Looking back on it I can see that this was setting a rather low bar, but even if the bar had been considerably higher the presentation made to us by the team of PYR’s newest imprint, Kokila, would have made short work of it. It was terrific.

If you haven’t heard about Kokila yet, it is “dedicated to centering stories from the margins with books that add nuance and depth to the way children and young adults see the world and their place in it.”

I had been wondering whether the new line was a top-driven response to industry inclusion issues; however, Kokila’s progenitor, Vice President and Publisher Namrata Tripathi quickly revealed that the imprint was the result of a personal wellspring of passionate intellectual vision, and built around not only concepts drafted on paper but an active commitment to collaboration and boundary stretching within the whole Kokila team. Namrata’s clarity of vision and purpose were unmistakable and her passion for the project was contagious.

Kokila is the Sanskrit name of the Koel bird whose song is the harbinger of the monsoon. The imprint named after it is built around a commitment to that metaphor but also to nuance, to dualities and semi-permeable barriers. The interplay between the center and the margin can potentially stretch in either direction, for example, depending on nuances of identity. The inherent tensions between topic-driven content, with its dangers of pigeonholing, and simply producing great stories told by writers of color where issues of ethnicity, race and gender are not necessarily self referential narrative lodestones, is also a point of creative tension in the project. Essentially Namrata is bringing dynamic principles of inclusion to both author and illustrator discovery, and to the publishing process itself, but the parameters of the imprint are not fixed or limited by anything other than the team’s sensibility and purpose. 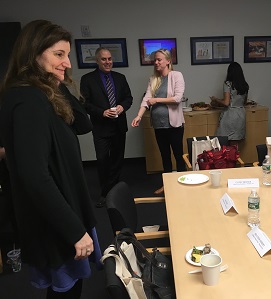 PYR Sales Director Todd Jones compels bookseller attendees, such as Heather Hebert, to go over and have some more coffee and fruit after the presentation.

An example of the team’s principles of boundary stretching and collaboration was seen in artistic director Jasmin Rubero’s development of Kokila’s logo. Jasmin, though having produced many stellar covers during her time at PYR, had never done a logo before. She shared with us the details of her quest to make a great logo for Kokila, which involved teaching herself many new skills along the way, and adapting collaborative criticism, to ultimately produce what everyone in the room agreed was a truly stunning logo. The Kokila logo will be revealed in a few days and so can’t be shared here. Watch for it!

Kokila editor Joanna Cardenas, though bringing along some writers she has worked with in the past, such as Pablo Cartaya, into Kokila, also shared with us her commitment to unconventional new discovery, looking for illustrator talent in online self published work and spending time at open mike gatherings of Muslim poets, for example.