“Why are these two covers so drastically different?” You see, I had asked one of our customers for her opinion on the hardcover versus the paperback edition of Gertie’s Leap to Greatness and got a question in return. 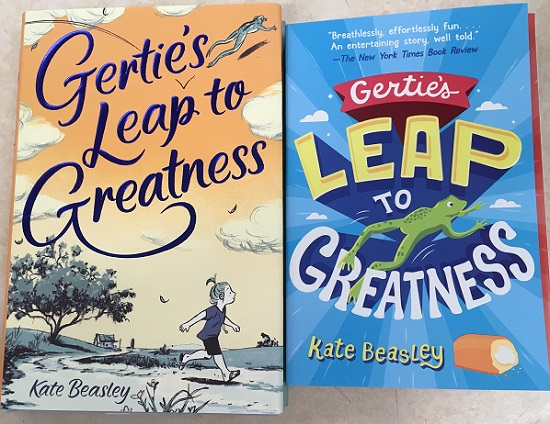 It was a good question. Another related question is why had I asked for her opinion in the first place? Fair enough. When I first saw the new cover that was to be used for the paperback edition of Gertie I had a visceral reaction. Why was this happening was my first thought. Gertie is a wonderful book and a store favorite featuring a strong-minded character, completely immersed in her own persona. She has no artifice to speak of, no degree of identity separation. Impulsive, creative, with a warm heart and feelings that run hot, she is deeply likable but also trouble for herself. It is a story with a terrific lesson about mistakes not being the end of the world, and the enduring value of truth to self. Gertie is also immensely relatable to her audience of 7 to 11 year old readers.

I just love the hardcover cover illustration. It perfectly captures the character of the book and conveys its unmistakably classic feel while maintaining a sense of resolution and immediacy within a comfortable backdrop. Why would anyone change such a perfect cover, I wondered, especially since the book had won awards and sold well? The new cover seemed to have plucked minor details from the story, the frog and the Twinkie, without conveying anything at all of the book’s character and quality.

Time heals all wounds, I have heard, but intermittently so. I had put the matter from my mind until yesterday when Karin shrieked one word “Why?” I grabbed my camera to capture the moment. She continued to make exclamations. 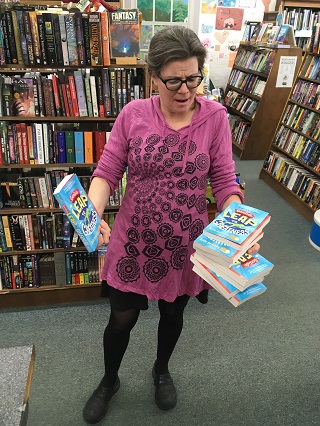 “The other one was so great.”

“It has lost its distinctiveness.”

“What were they thinking?”

I felt her shock and pain. When the paperback edition went on sale today we asked our great new young staffer Claire what she thought. Claire replied that the new cover looked more modern and kid-friendly, while the old cover appealed more to adults. That was an interesting observation indeed. We responded by first acknowledging that our up in arms perspective was affected by having read and loved the book already. During the ensuing discussion Karin pointed out that though we sometimes had the chance to sell Gertie to young readers directly. most of the many copies we had sold were pitched to grandparents and parents. I ventured the opinion that the old cover did have kid appeal too, but that its most important quality was that it accurately rendered the qualities of the story. Still, Claire’s observation was eye-opening. 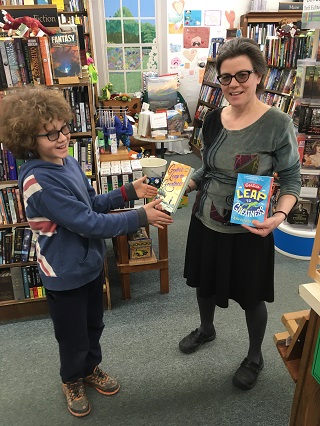 Getting back to our customer whose opinion I had sought. After I gave her a little background she made a comment similar to Claire’s. “Well, the old cover has a classic feel, the new cover looks modern. I like the old one better.” She is an adult which hardly undermines Claire’s perspective.

My position is that the old cover tells the reader that a rare and wonderful story lies within its pages, and because it delivers on that promise the readers’ expectations are elevated appropriately. The new cover may have kid appeal but it is nondescript; the book could be any new book with a bright blue kid-appeal cover. Most of all, Gertie’s Leap to Greatness is about the importance of being exactly who you are no matter what. The original cover embodies that principle. The child I see on the old cover is Gertie to me, just as I see her in my mind. Still I’m an older reader and am biased from having read and loved the book already. Is this really simply a case of kid appeal versus adult appeal, or is the accurate conveyance of the book’s essence important? What do you think?