I have a heartwarming tale to share with you this week. One that should reassure you of the generous nature of people and also reaffirm how much representation in media matters for people of all ages.

Over the weekend a woman came into Spellbound with her husband and teenage son. As she was browsing the graphic novel section, I noticed her calling first her son and then her husband over. There was a lot of excited murmuring, which I understood better when it came time for them to check out.
As I rang up his books, the son nudged his mom and asked about “her” book. Mom shook her head and said she didn’t want to take it because it was the last copy. Fellow booksellers: as well intended as this thought is, isn’t it frustrating?  Books are here to be purchased — please buy it if you want it! In this case the hesitation had the very best of intentions behind it. 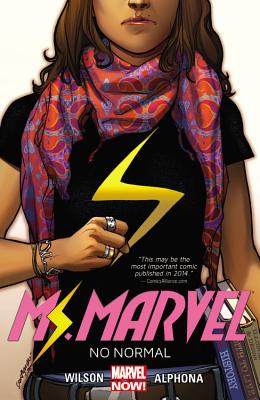 The book in question was Volume One of Ms. Marvel which, in case you aren’t familiar with it, is a thoughtful and fun Hugo Award-winning superhero comic featuring a young female Muslim hero. Created by editors Sana Amanat and Stephen Wacker, writer G. Willow Wilson and artist Adrian Alphona, Kamala Khan/Ms. Marvel is Marvel’s first Muslim character to headline her own comic book, with Volume One published in 2014 and Volume Nine coming out this July. (I strongly suggest stocking this series if you don’t already — even if you don’t have a large section of comics and graphic novels. Great for ages 13 to 100!)
Back to my heartwarming customer story. It turns out that she really, really wanted to take Ms. Marvel home, but she was close to tears as she said, “Some girl is going to come in here who needs to see it, and I want it to be here.” Her husband and son lovingly ganged up on her, assuring her that she needs it, too, and I joined in by promising that I would reorder it immediately so Ms. Marvel would be there for the next girl (or woman… or anyone) who comes in and needs to see it.
If you felt a little choked up just now, you’re not alone. I shared the very short version of this story in a tweet and it’s gotten more likes, retweets, and replies than anything I’ve ever shared on Twitter, with many people saying they got emotional just reading the tweet. To put it in Twitterspeak, #RepresentationMatters.