What do you see when you look at this sculpture? The 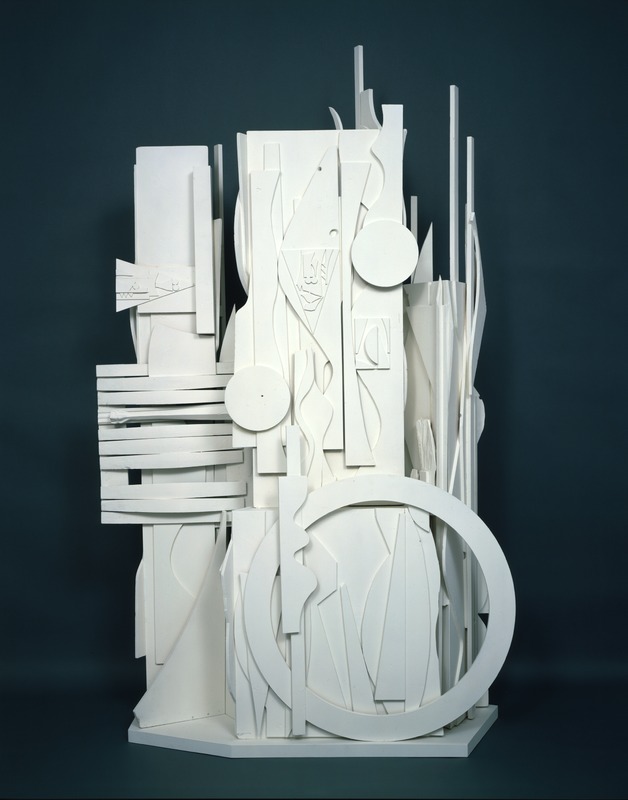 piece by Louise Nevelson is titled Dawn’s Presence, but what is the sun rising on? Seen in the context of Timeless: Diego and the Rangers of the Vastlantic, Armand Baltazar’s epic mash-up of timelines, technologies and cultures, perhaps it starts looking like a city—but a city for whom and with what purpose? With skyscrapers outfitted with slides instead of elevator shafts and jagged dragon’s teeth on the edges, this city of the imagination begins to take shape, rippling with strangeness and pulsing with energy. Makes you want to grab your hoverboard and soar, right?
Earlier this month, 150 students and I joined Armand Baltazar at the Blanton Museum of Art for the second installment of the Art of the Book series, a program we and the Blanton piloted last year with  Javaka Steptoe. Designed to use the work of illustrators as a jumping off point for art exploration, our program brings students in for a presentation in the auditorium followed by interactive gallery walks and activities designed to tie into the themes of the book. 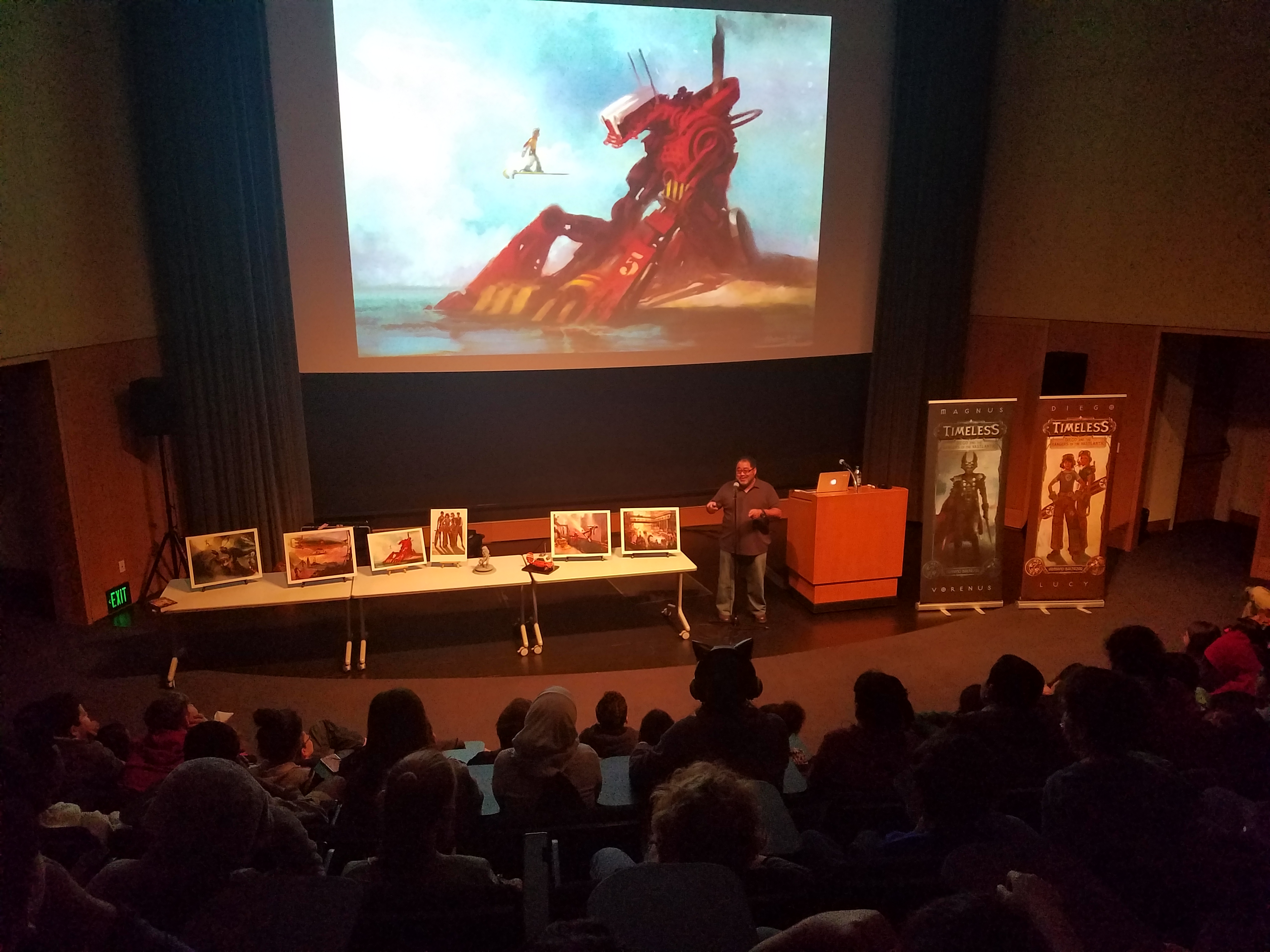 Before the kids arrived, we started with a video interview in the galleries where Armand talked about the influence that the Art Institute of Chicago had on him as a kid. Armand reflected that part of what draws him to museums is that that there’s a tangible difference between seeing a piece in a photo and walking around it, exploring it as an object that someone touched and created from scratch. And that’s part of the magic of author and illustrator events too. Kids get to look beyond the finished product of a book to see the intention and desire and craft behind it. And then they get to engage in a back and forth with that person about what the book sparked in them as readers. Our goal through our collaboration with the Blanton is to crack open the idea that works of literature or art are static but rather exist to be engaged with and expanded upon and experienced.
As the students filed in, their eyes pored over the large prints and 3D facsimiles Armand had brought with him to bring Diego’s world to life. Then they eagerly settled in to hear all about it. (Side note: one cool thing about the Blanton auditorium is that art looks incredible blown up on the huge screen.) When he talked about building his dazzling temporally blended world, one of the key things Armand said was that he wanted to reimagine some of the ordinary things people think they know all about or take for granted and make them look new and interesting and worth another look. I loved that because letting go of preconceptions and seeing things with new eyes in new contexts is core to what this program strives to do. 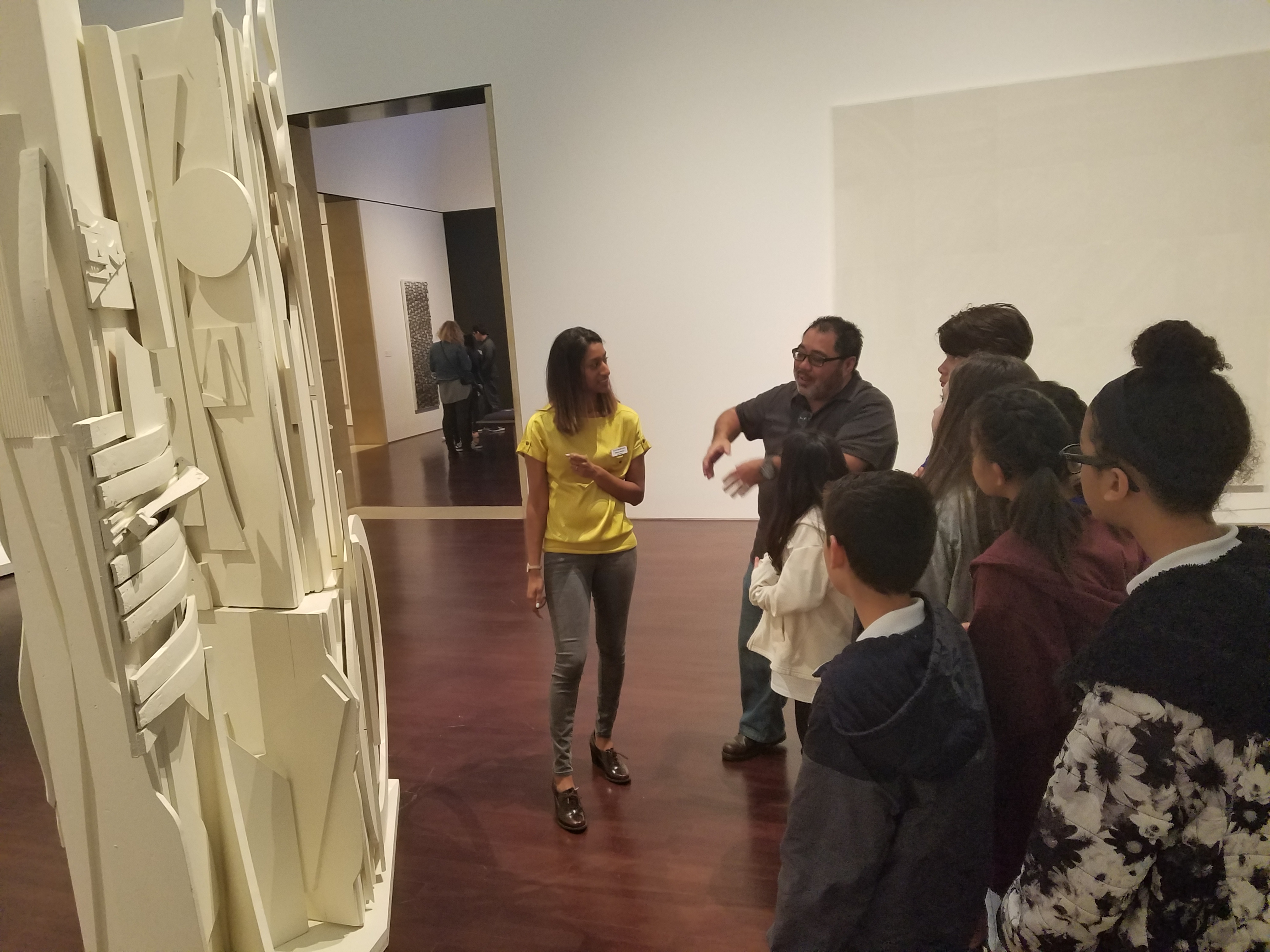 Armand Baltazar talks to the kids about what he sees.

When the kids broke into groups for gallery rotations, Armand and I joined a group that quickly circled around Dawn’s Presence. Led by prompts from museum educator Sabrina Phillips and input from Armand, the group riffed on what the sculpture could be. The kids dreamt of a city named Ember Dragon, a city on the razor’s edge between order and chaos—a city about to ignite. And then they were asked to enter into it. First tasked to find a separate piece in the gallery that spoke to them, the kids were given 15 minutes to use that second artwork as inspiration for a costume fit for a character from Ember Dragon City.
The kids were having fun building a narrative around the sculpture, but when they moved into the activity, their energy loosened. No longer worried about saying the right thing, they transitioned from interpretation to inspiration with gleeful, newspaper-shredding abandon. Soon a stylish dragon keeper, a grumpy pyromaniac, and a vigilant security guard were born. Then we cleaned up and went outside for lunch, full of new ideas.