It is hardly possible, for bookstore buyers, to overstate the importance of comping, the provision of comparable titles in Edelweiss by publishers to enhance the buying process for us frontlist buyers. High quality comping takes into account a myriad of factors: whether to use titles from other publishers, whether to show both hardcover and paperback titles, recognizing series books and comping accordingly, avoiding low-hanging fruit such as using Gone Girl and Girl on a Train for every thriller written by a woman, putting in just the right number of comps, showing genuine insight in using cross-genre titles, just to name a few elements involved. We should also also recognize at the outset that comping is generally not done by reps but by specialists in-house at the publishers.

Let’s look at a sample I chose more or less at random. It is also a little shout out to Olga Nolan, my longtime and beloved Harper rep who just retired. (Sigh and best wishes, Olga!) 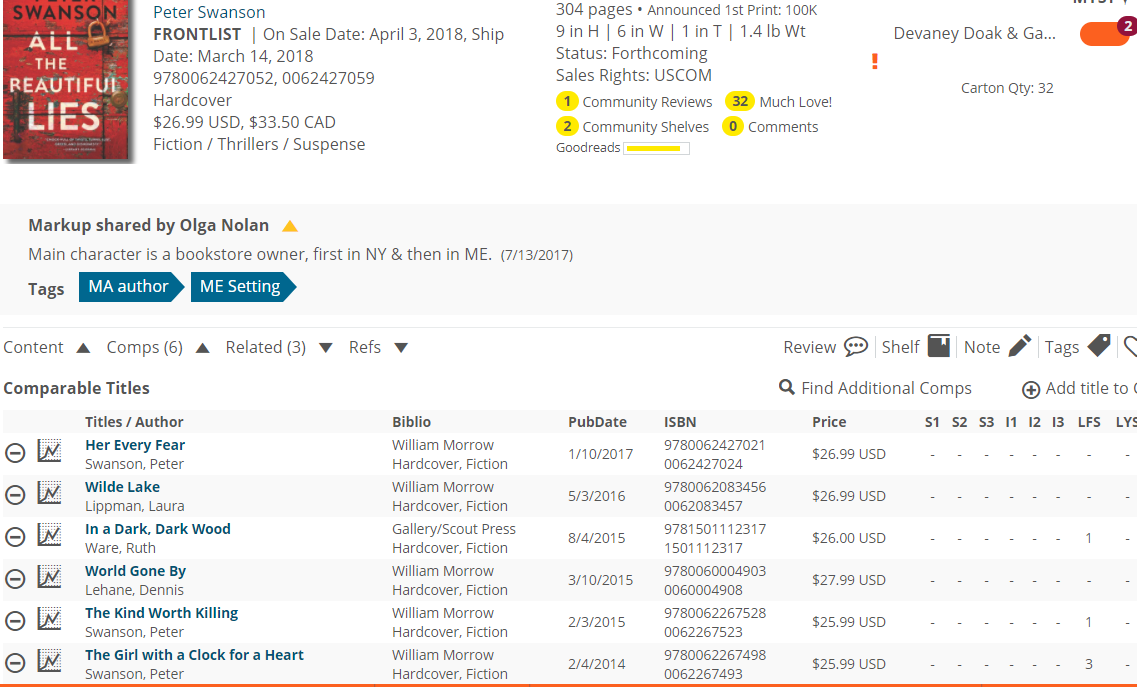 Note that only hardcover titles are used. This is appropriate in this case as the book in question is a hardcover. It has a good mix of the author’s –Peter Swanson’s — earlier books and some appropriate comparable author titles as well. Note they are all Harper authors, I prefer to see comps from outside publishers too in a case like this. One can see a downward trend on the author’s sales here but, given the markup information that the book’s protagonist is a bookstore owner and set partly in Maine, I am in for two. This is rock solid comping. Everything I need to know is right in front of me and I am very appreciative of that.

Debut authors are the trickiest aspect of comping, the one in which the most trust and insight are called for. Let’s look at a terrific debut that just came out yesterday, Tomi Adeyemi’s Children of Blood and Bone. 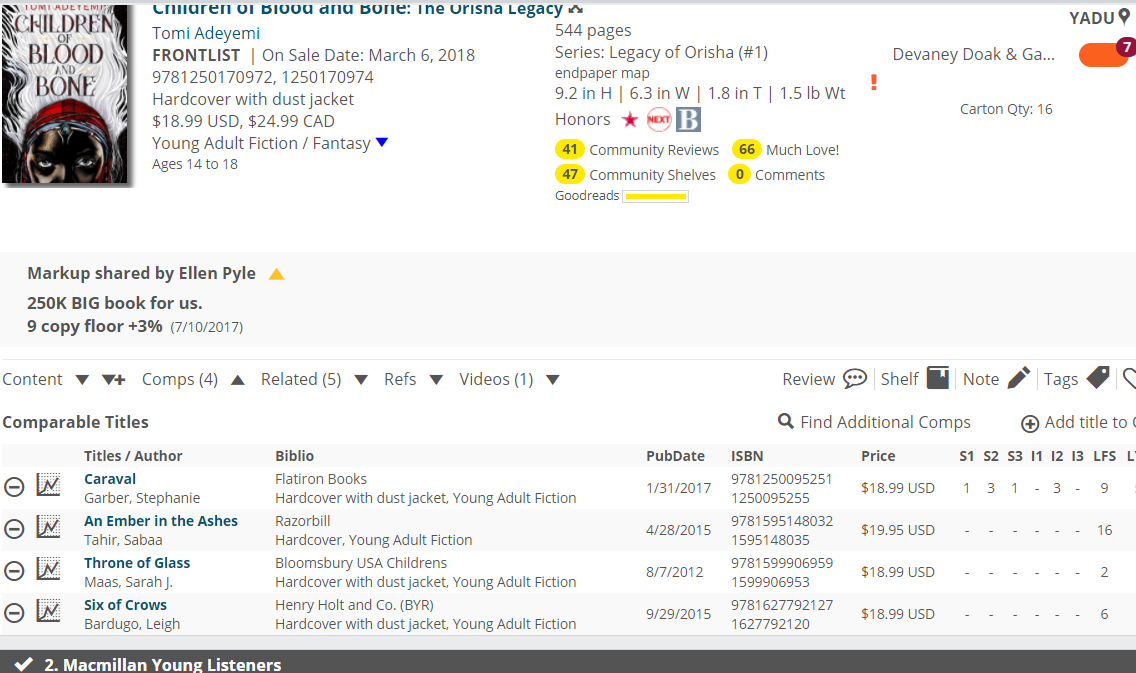 Again, this is strong comping. The temptation of throwing on too many comps was probably huge, but the ones chosen here are all on point. Note that Throne of Glass, the first book in Sarah Maas’s hugely successful series is listed in hardcover. It’s appropriate but the low number reflects that the series didn’t catch on here that first year. This is a case where using a paperback would have been a little stronger; it would have shown 24 and called the eye more to the comp. Nonetheless, given what a big book Children of Blood and Bone is, this comping is both and measured and effective.

Some books are specialized in their comping needs, though, and when they are not addressed properly, cause buyers a great deal of frustration and extra work. I’m thinking particularly of established series, early chapter book titles for example. You can probably guess which book is being comped here for example.

That’s right it is Princess Ponies Number 6, Best Friends Forever. This is actually good comping. I don’t need to know how other similar magical animal chapter book series are selling. It is all about the Princess Ponies at this point and I appreciate the precision.

When this sort of information is lacking it can be a real time-waster. Take EDC for example. They have great books, of course, but EDC books are made for internal comping, meaning almost all their frontlist books are part of an established series. Take this one for example.

We need to know one thing here: how have the earlier Build Your Own EDC books done? The answer to that question should be on the screen but it is not, because EDC does not use the comping feature. This is a wrong move and, please note, not their reps’ fault. EDC, I call upon thee to step up to the plate!

Great comping generates sales for publishers and increases the efficiency for buyers, something for which we are profoundly grateful. It is a cousin to the handselling that booksellers do all day long and I think it is appreciated and understood by us accordingly.

I have one question for readers. If you could retire forever two overused comp titles, what would they be?