Beth stopped by the shop this morning, carrying little Noah in the pumpkin seat, making him look much bigger (and heavier) than his two-month-old self. Ostensibly, she came for story time, but  Noah snoozed through the whole experience, which was good, because judging from the circles under Beth’s eyes, he’s been up at night a bit. His mom comes in at least once a week—during her pregnancy, she would drop by after OB appointments just down the street, usually adding a board book or baby toy to her collection for their first child. Beth is an attorney, and plans to go back to work in another month, but she’s struggling with the decision already, and we spend a little time comparing childcare options and work-from-home realities. We end the visit with muffins and hugs for mom, and a furtive squeeze of one exposed little foot…. oh, baby toes.

The “triplets of terror” made an appearance at story time, too, along with Grandma this week. Mom and Dad were at the closing for the new house, and Grandma wanted to spend the day out as much as possible, to keep the current house clean for the real estate agent to show. The boys are now three, and while individual personalities have emerged (and they’ve stopped being dressed identically, so we can actually figure out which is which), they share the same whirling dervish quality to their play. One staffer is quickly assigned to triplet duty, and a folding chair appeared for Grandma. Story time is a bit of a challenge, behavior-wise, as the phrase “poopy dude” has become the boys new mantra, eliciting guffaws from their brothers and the rest of the criss-cross-applesauce audience. Several children added this to their vocabulary this week, which will probably mean lower attendance next Tuesday—note this on muffin order.

Mrs. Parker stopped by to get some things for the grandchildren in Cincinnati, which she had us wrap and box, as she’s not sure if the planned drive down this weekend will happen, or if she needs to ship the items. Her husband, David, is undergoing chemotherapy, and while it’s been going pretty well, she thinks he might have spiked a fever this morning. They’re off to the oncologist this afternoon, and while she was her usual efficient self, selecting three books quickly from the stack of 7  or 8 we pulled for the kids, she stood at the counter for a minute with a blank look when we asked for their names to put on post-it notes outside the packages. “It’s OK—let’s just put ages on the packages… 3, 5, 8, right?” All three names popped out of her mouth a minute later, as expected, but I walked her to the car and held the bag while she looked in her very large purse for the car keys.

Tammy was in right after the story time crowd left, with her newly minted middle schooler, looking for some travel activities for their upcoming drive to Michigan and a well deserved week at the lake. We browsed new releases and games for the cottage, and asked about her plans for next year. Tammy has been an inner city public school teacher for the last 15 years, managing this career around the school schedule of her own two children and working spouse. She was informed last week about a grade level change, shifting her from a fifth grade classroom where she has taught for eight years to first grade, a prospect she finds daunting and somewhat disheartening. She wonders if it’s time to look seriously at schools in the suburbs, noting that a number of “her kids” rotated between three or more different schools this year due to family and income instability, and questions whether her heart and will are strong enough to deal with those issues among 6 and 7 year olds. We laughed a bit about the differences between Are You There God, It’s Me Margaret and Are You My Mother? as reading circle choices, and made a date to spend some time in the picture book shelves after she returns from vacation and gets access to her new classroom. She suspects there will be little there for her to use, as most teachers collect classroom lending libraries personally, and I make a note to start saving posters and damaged books that will not be returned in a box in the stock room for her.

The noontime crowd from the restaurant next door began to drop by—we’re a popular waiting place when folks arrive 10 minutes early for their business lunch. It’s an easily identified population, wearing jackets and grownup shoes, with a sense of urgency to their errands. We hand them new picture books to browse at the register while we’re ringing up their sales, in hopes that a little Pete the Cat vibe spills over into their Very Important Meeting. A staff member shares a wink as we hear one grey-suited professional humming along with “Bear Necessities” as he leaves…. a little Baloo never hurts a sales presentation, does it?

The bike-riding crowd of upper elementary kids from the neighborhood behind the shop appears after lunchtime—we suspect they’ve been dispatched outside to break the video game hypnotism that had them enthralled much of the morning. We typically relax our rules about unaccompanied children a bit in the summertime, and while this gaggle of boys is easily supervised, I offer them Dumdums from the bucket in exchange for toting the stack of cardboard displays out to the dumpster. Cardboard displays are like diet fads—hopefully engaged, but difficult to master, easily broken and therefore quickly disposed of. There’s always another one or two waiting to be tried, with similar optimism but perhaps less duct tape. While the boys are here, we ask them to recommend their favorite recent read, partly for market research and partly to let them hear each other talk about books. As expected, there’s a lot of variety in what they think is cool, and I offer to send pictures from my phone of titles that look intriguing to Mom or Dad. We hear about travel teams and weekend tournaments, and send them off for further adventures and a reminder to check in at home periodically on someones phone.

The early afternoon brings a favorite couple, the Finches, after their weekly lunch date at the tavern in town for pork tenderloin sandwiches (and if you’re not from Indiana and that sentence doesn’t make you sigh, you need to come visit us real soon.) Mr. Finch coached high school basketball and baseball for 35 years in the southern part of our state, retiring just as his own grown children began producing a lineup of future Hoosiers. His wife, Maggie, has the good humor and patience born of years keeping dinner warm while waiting for practice to end, and immense tolerance of his fondness for puns and one-liners. We get to see some pictures of the garden on her new tablet, which she carries around now because macular degeneration makes the phone too difficult to see. All the grandchildren are coming for the 4th of July, so we pick out a chapter book for reading aloud, and a new little something for the baby. “How do you make a skunk stop smelling?”  “Pinch his nose closed.” “Oh, Ben, that was terrible.” “I know, but you love me, right?” (Yes, we do.)

Following an age-old custom in retail, we begin making a huge mess in the store, pulling books for an upcoming conference of play therapists that begins on Thursday. And just as surely as rain on Indy 500 qualification day, this draws a group of first-time visitors to the store, arriving in an almost choreographed cluster. We’re not sure WHY pulling apart a display draws a crowd, but it’s an always effective technique to fill a quiet store. Similarly, any complicated phone call to a credit card processor, the phone company, or the dreaded help desk of the computer service will attract high maintenance customers. This gaggle includes a “I’m not sure what it’s called, but it’s blue and I think it has a dragon on the cover” browser and a PBS parent—one who searches for books that feature characters from her three-year-old’s favorite shows. Both, happily, are easily satisfied, and we’re able to give a high school age employee lots of praise for quickly identifying the mystery title. The remainder of the group are the “oh, I could never bring my daughter in here…. she’d go crazy” commenter and the “we have SO MANY BOOKS AT OUR HOUSE already,” phrases that we think we shouldn’t be bothered by but always rankle just a bit, so polite smiles all around and as I offer the bucket of Dumdums to the staffers on the floor and get back to the mess.

The Lexus/Nexus lineup punctuates the rest of the afternoon—these are the moms and nannies who take the errand running just one stop too far… and the toddler has started an afternoon nap in the car seat, preventing further checks off the “to do” list. Offering phone orders, free gift wrap, and curbside delivery guarantees the loyalty of this demographic, so we skip outside with wrapped packages and credit card receipts attached to clipboards, peeking at sleeping preschoolers in the backseat, still clutching sippy cups and wearing swimsuits from the pool. We offer an Indie Next list to browse in the coffee drive-through line, and tuck a July calendar in the bag, pantomiming the entire transaction to preserve the sanctity of that precious afternoon peace. (Sometimes what we don’t say is more valuable than what we do.)

Early evening brings the “honey, pick this up on your way home” customers, and the hold shelf empties, except for that one mysterious volume of Aesop which NO ONE remembers who special ordered, but everyone is afraid to shelve. We ask customers in suits and scrubs about their day at work, surprise them when we call them by name (the company ID lanyard has put everyone on familiar terms, hasn’t it?) and respond to requests for books reviewed on public radio and in the newspaper. The UPS truck pulls up with one late delivery—the missing box from the shipment of 16, which of course contains the elusive packing slip for the entire order—and a task list for tomorrow is started. As I print the daily Ztape, and look over the list of items to be restocked and ordered, each of those titles reminds us of a story—one that is not contained in the book itself, but the experiences of the person who bought it and shared their day with us. 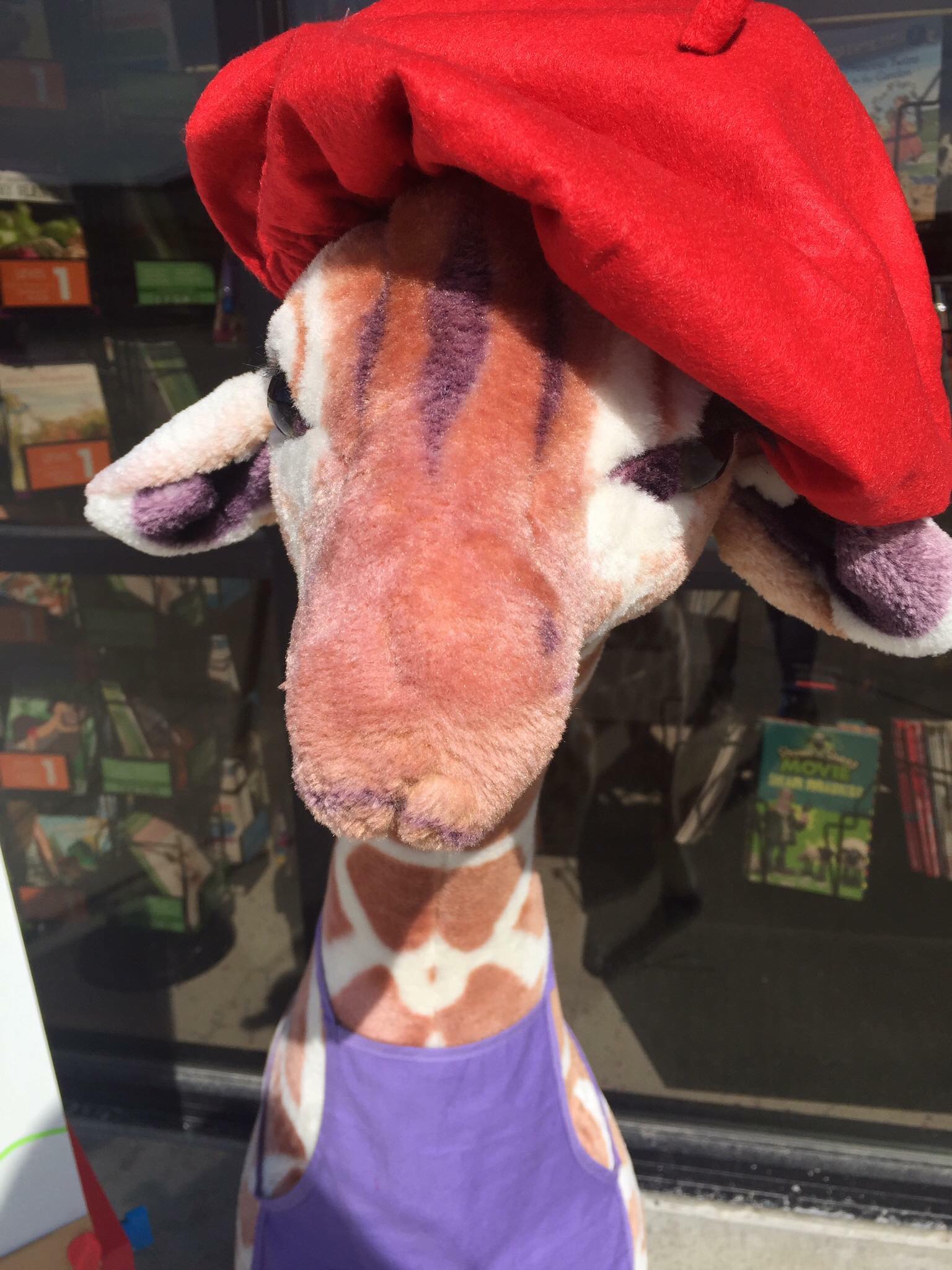