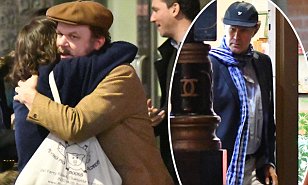 It isn’t every day our bookstore ends up in the news in the U.K. Well, not really the news, but a news-related photo. And not really the store, but our tote bag, innocently brushing up against fame in its encounter with actor John C. Reilly and his pal, Will Farrell. That woman in the bear hug is no random fan or friend of the actors; she’s a Flying Pig alum – and works for one of them. I’ll back up.

Several years ago, two funny, brilliant sisters in their teens, both avid readers, took a summer job at the bookstore. Their family came up every year from New York City to spend the summer in Vermont, and the girls spent a lot of time at the store — so much time that we figured they should get paid for it. They both went on to college and then a couple of jobs. One worked in publishing, the other moved to Los Angeles and became Will Farrell’s assistant.

(Yes, we are now one degree of separation from the world’s most famous elf and the brain behind FunnyorDie’s “Pearl the Landlord.” But, having grown up in L.A., where you can’t swing a cat without hitting a famous person, I long ago took the Oath of Casualness about Fame, feigned or no. So, while I did once have dinner with Mick Jagger when I was in seventh grade, and plant silk banners in the sand on the beach with Larry Hagman, and hear Harvey Korman’s great laugh boom toward the stage from his seat in the audience during our high school plays, I’ll never talk about it.)

So anyhow, the other day the bookstore front-door sleigh bells jingled, and in walked the two sisters, all grown up and back for their summer Vermont time, now scaled back to weekends because of work. It turned out that one had left her beloved publishing job, partly because it just couldn’t pay a living wage, and partly because she got a great opportunity to work with her sister. Because their bosses are great buddies and happen to be doing a Sherlock Holmes movie together, these two get to happily and crazily overwork themselves side by side!

We talked for a while about their aspirations (yes, they do want to direct, and yes, I’m 100% sure they will be brilliant at it). Ringing up their summer reading books, I noticed the ancient and tattered Flying Pig tote bag over one of their shoulders. “That’s from the old store!” said Paige (not her real name). “I take it everywhere.”

Her sister Julia (also a fake name) nudged her. “Hey, we have that picture to show Elizabeth,” she said. “That’s right!” Paige said, scrolling through her phone. She held up the above photo,which I didn’t realize until later was from a newspaper. I just thought Paige had some nifty editing software, and thought it was cool that our little bag hopped the pond and visited London and hugged some AMAZING actors. (Oops. Oath.)

Paige looked at the photo and said, rolling her eyes at herself in the picture, “You’d think I’d never had a hug. I’m all in. It looks like ‘desperate fan stalks actor.'” But to me, it looked like, ‘actor bear-hugs woman who has just averted a major crisis for him.’ ”

Later, I discovered where that photo came from, and noticed that the tote seems to feature black ink instead of our purple. Maybe purple wasn’t available back when we first printed that ancient tote, or perhaps the photo editor took out the color because it distracted the eye from the hug, but in either case, we are utterly delighted that the Flying Pig flapped its little wings overseas.

And, World? I can’t wait to link back to this post someday and say, ‘You know those two sisters who have won more Oscars than the Coen Brothers? We all knew them when.” 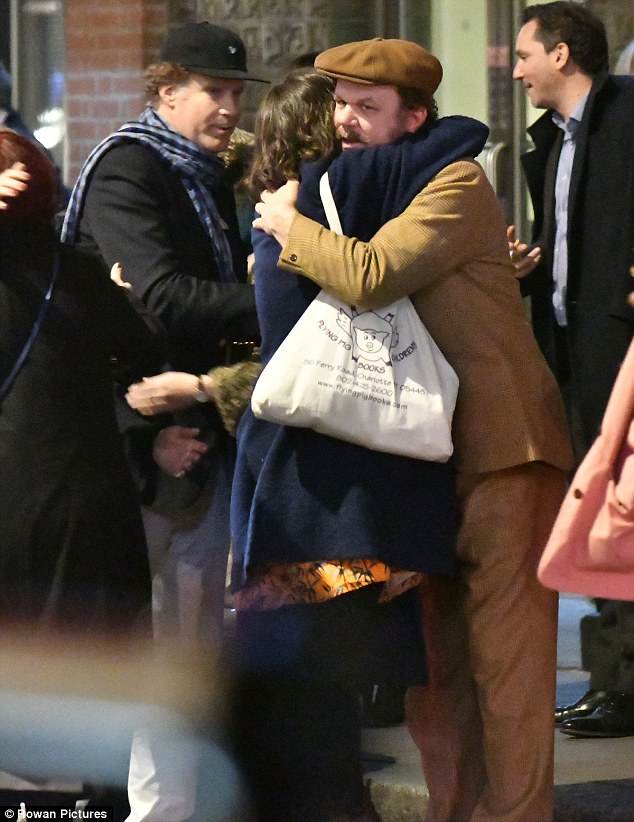 The full photo, also by Rowan Pictures and from the Daily Mail UK.