Last week, I looked at the calendar realized something. Eight years ago today, on April 6, 2009, I wrote my first post for PW. Alison Morris was leaving the blog, and passed her bedazzled and intimidating baton over to me and the Flying Pig’s then co-owner Josie Leavitt. We became the new children’s bookselling bloggers for PW’s ShelfTalker, which was and is helmed by my editor Diane. I had no idea that, nearly 500 blog posts and almost a decade later, I’d still be at it. Come to think of it, I had no white hair when I started blogging, and now I have two blazing streaks. Diane, I’m looking at you.

I’ve been so grateful for the opportunity to write about topics important to me, from the minute (a plea for series numbers on book spines) to the monumental (diversity in children’s books and in publishing). I still
look back at a 2010 post, The Elephant in the Room, about the overwhelming whiteness of our publishing field. The article featured amazing art created for the piece by Kevan Atteberry, Addie Boswell, Jerry Craft, Katie Davis, Nancy Devard, Elizabeth O. Dulemba, Laura Freeman, Erin Eitter Kono, Grace Lin, Claudia Rueda, Nicole Tadgell, and Sharon Vargo. I look at it and think of what has changed in the seven years since I wrote it (the creation of the We Need Diverse Books movement, the CBC’s Diversity initiative, #OwnVoices and more) and what, shamefully and frustratingly, has not.

As I write this post on the eve of this anniversary, I’m basking in the glow of a lovely evening filled with book love. Tonight, at the HarperCollins dinner in Portland, Oregon, at Children’s Institute, I was among several booksellers meeting three writers who were all making book debuts of various kinds. Each author was warm, funny, smart, and beautifully articulate about what books had meant to them as young people, and what writing and art means to them as adults. I left the dinner truly energized and excited about all three of their books: Armand Baltazar’s gloriously illustrated blockbuster-to-be adventure novel, Timeless: Diego and the Rangers of the Vastlantic, Tim Miller’s hilarious and irresistible picture book, Moo Moo in a Tutu, and Liara Tamani’s poignant debut novel, Calling My Name, which explores how one girl finds her own way navigating the complicated waters of family, spirituality, sex, and expectations while growing up in a loving yet strict religious family What better way to celebrate all these years of raves and rants than to write on an evening filled with book love? Which reminds me that the most fitting way to end this anniversary post is to share a little bit of last week’s event with Mac Barnett and Jon Klassen, in celebration of their new book, Triangle. Mac’s exuberant (and fabulously sweet) bravado and Jon’s deadpan (and artistically hilarious) counterpoint to it, brought so much delight to school and public audiences that families can’t stop talking about their visit last week. 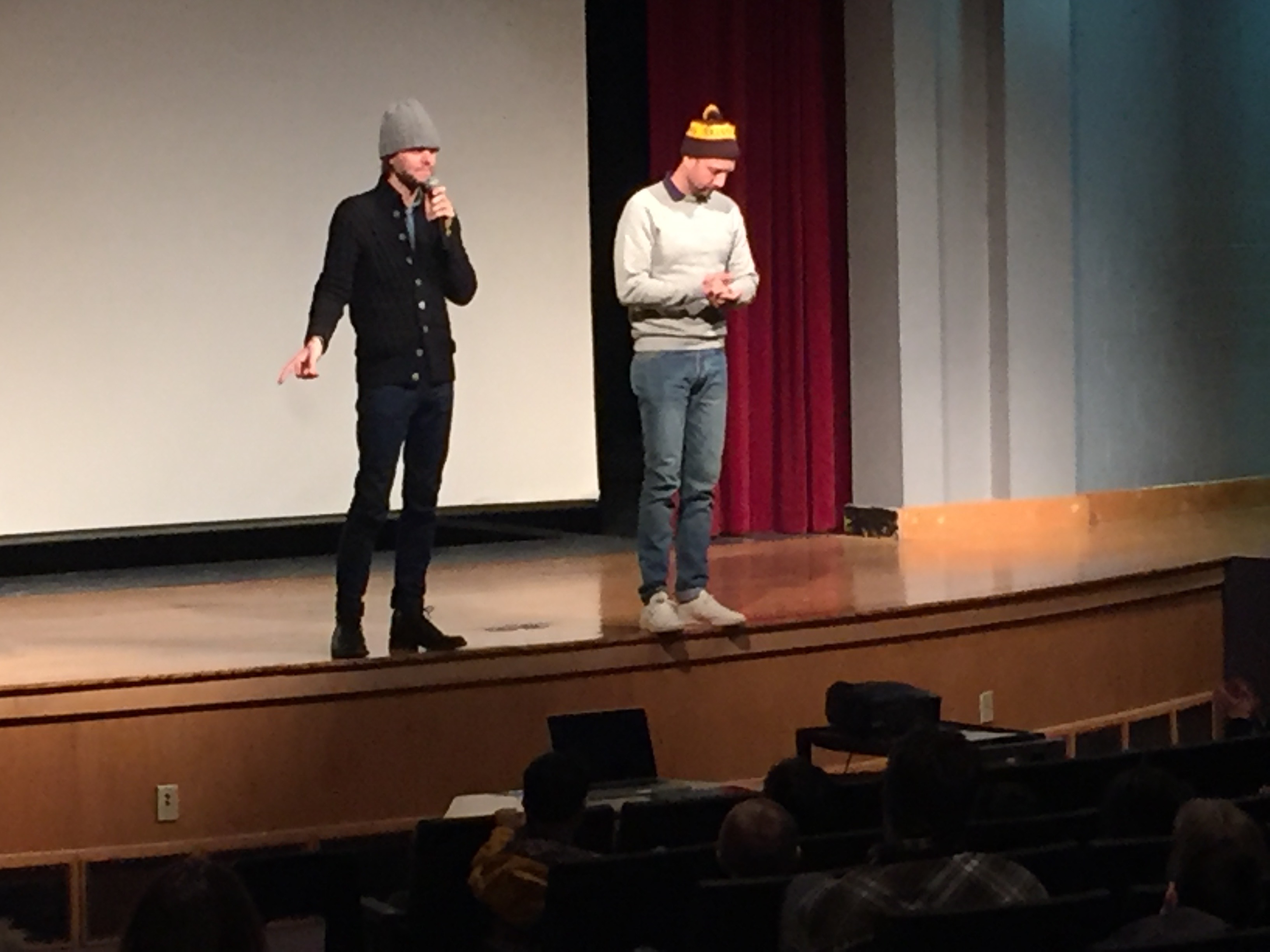 If you haven’t read Triangle to a young child yet, stop reading this blog post and go do that immediately. You won’t be sorry. The DELIGHT they have in this story! It’s adorable, the amusement that springs from the simplest of premises: one friend, triangle, plays a funny sneaky trick on his friend (a square), and Square tries to play a funny sneaky trick back on Triangle, with unexpected results. It’s all in the execution: the perfect text, the visually arresting and funny art (those eyeballs of Klassen’s! He really (re)invented eyeballs in picture books) — it’s a huge read-aloud winner of a book.

And while the book is ‘meta’ and hip and funny—the trifecta in picture books these days—it manages to hit the humor hard while avoiding snark and snideness or going over the heads of its intended audience. Not too shabby!

At their midday school visit, a group of 300 wildly excited K-2 children played a “sneaky trick” on Mac and Jon that they’d practiced with their teachers: as Mac and Jon were brought out from backstage, the children stood, faced the back of the auditorium, and clapped an enthusiastic greeting in the opposite direction of the author and artist. Then they turned around, made an O above their heads with their arms, giving Mac and Jon a standing O-vation. Pretty sneaky, Allen Brook School!

The author/artist team gave a fantastic presentation. The kids were so jazzed up, the school librarian keeps calling with more book orders from kids, two weeks after their visit.

Then the pair of intrepid book creators came to Shelburne Town Hall, where they managed to compete with the first gloriously sunny day in a while to draw a crowd of about 100 kids, parents, teachers, and librarians. (You can’t see the rows of kids sitting on the floor.). 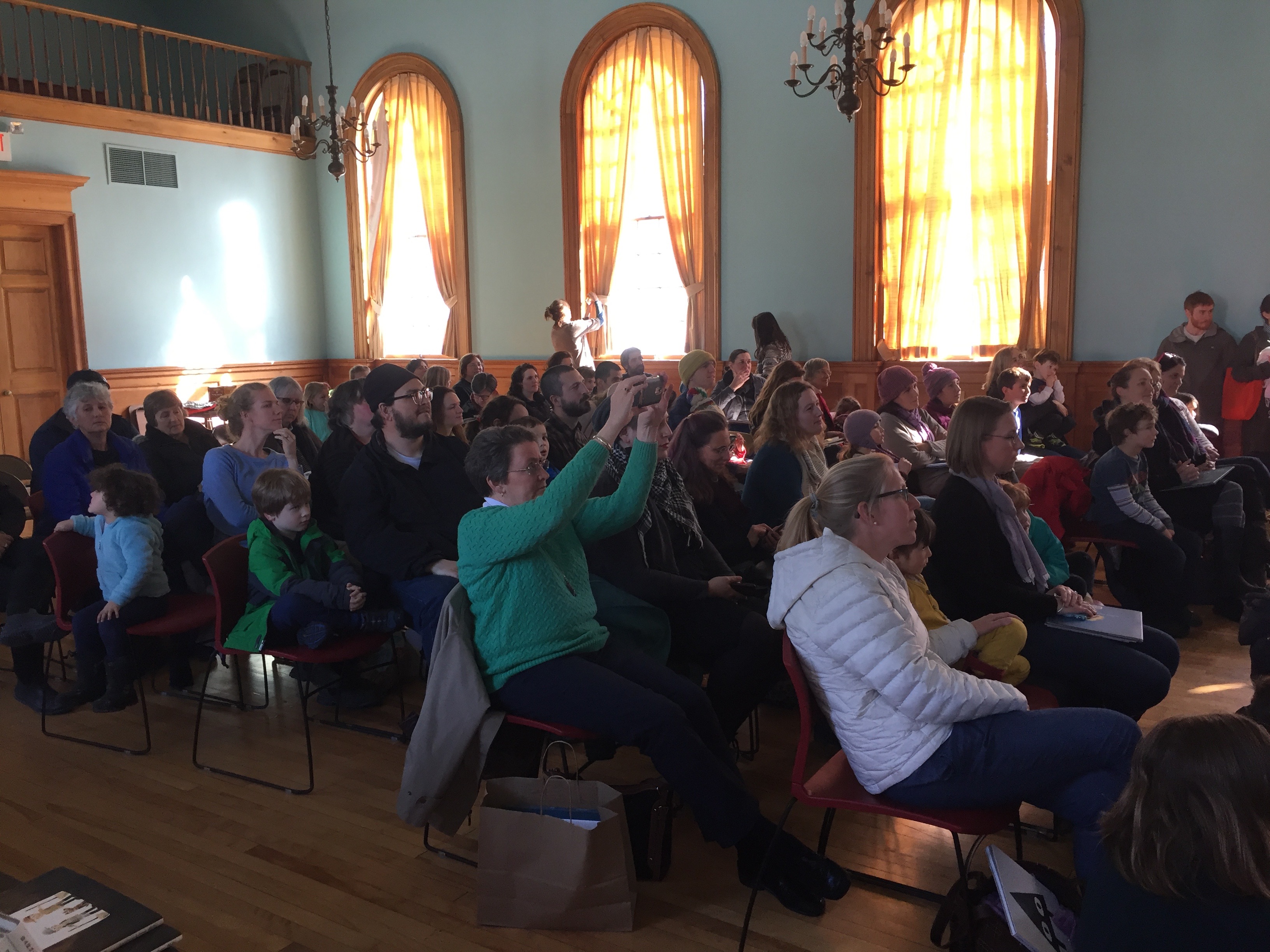 Mac and Jon gave another fantastic presentation, reading a couple of books, talking about their creative process together, and showing the kids how the illustration works: 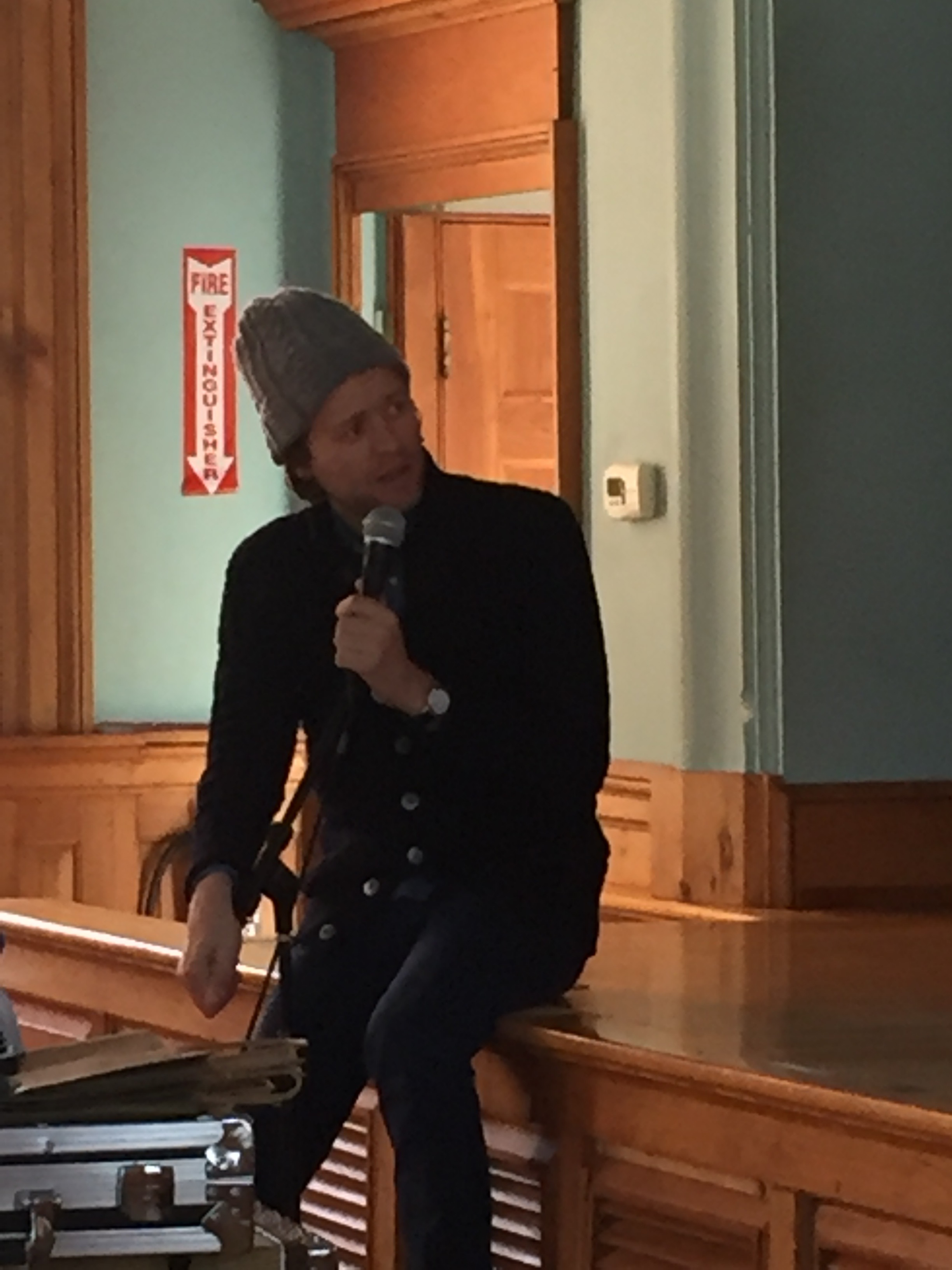 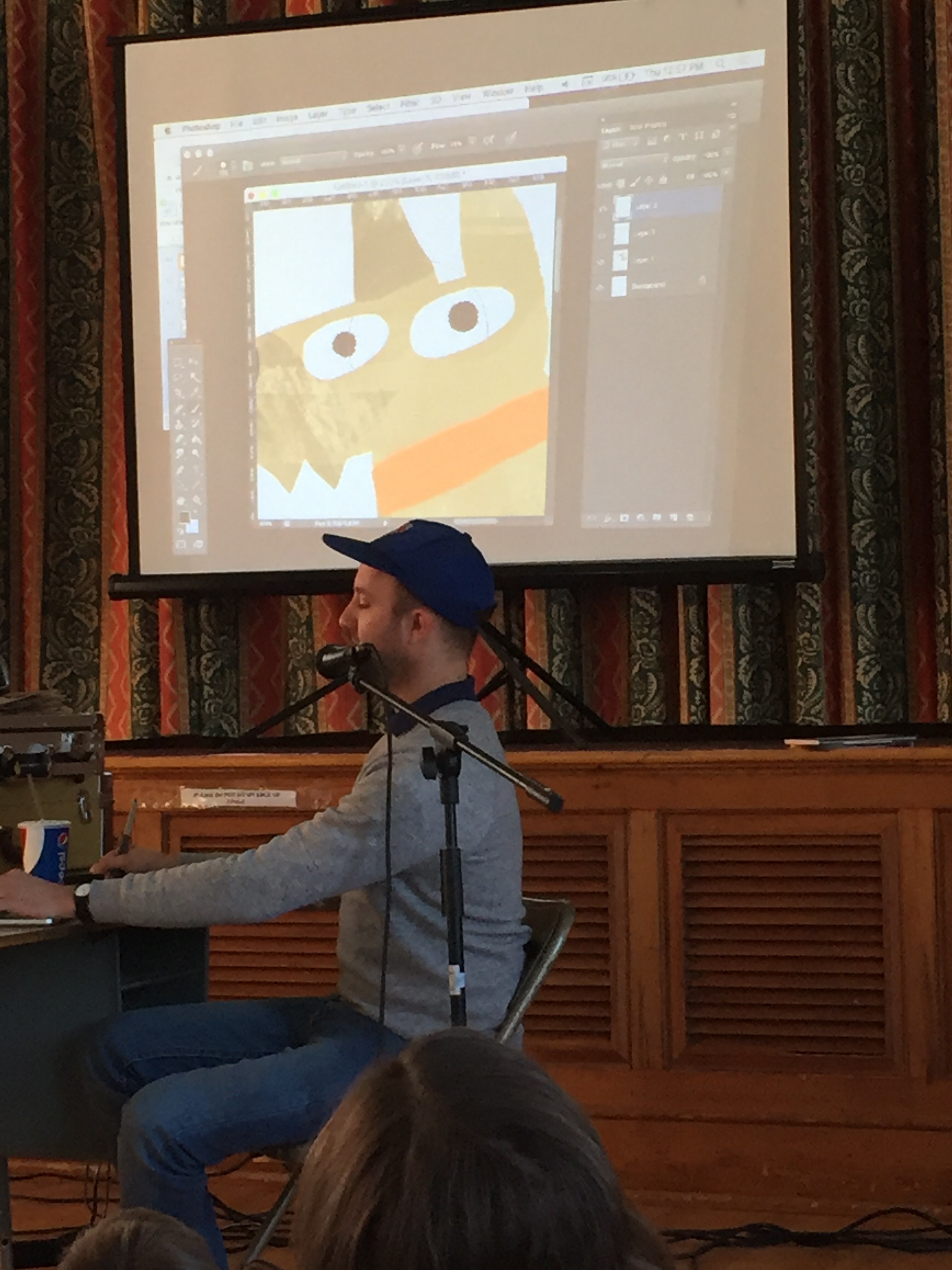 As Jon revealed his first slide showing the characters in Triangle, one four-year-old shouted, “I know that square!” like he’d recognized a pal on the street. It was adorable. During the Q&A, a librarian shared that her students had discussed which character they thought represented the author and illustrator. “For some reason, they think you (Mac) are the triangle, and you (Jon) are the square.” Jon thought for a second and said, “I’ll take it.” And Mac said, “Yeah, I’ll take it, too.” 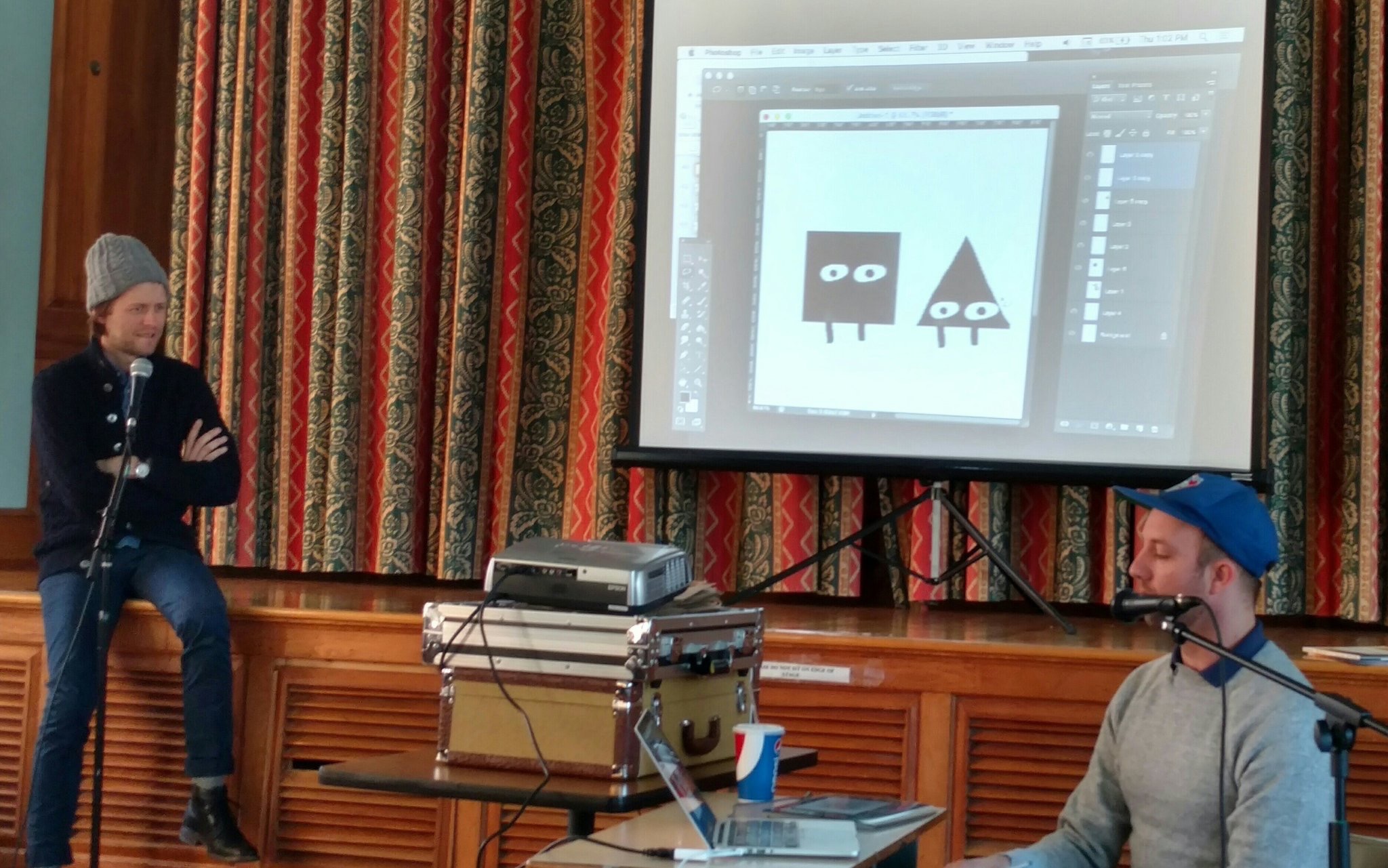 The night before the event, I found a Make Your Own Cookie Cutters kit in my kitchen, so I made a couple of familiar characters: 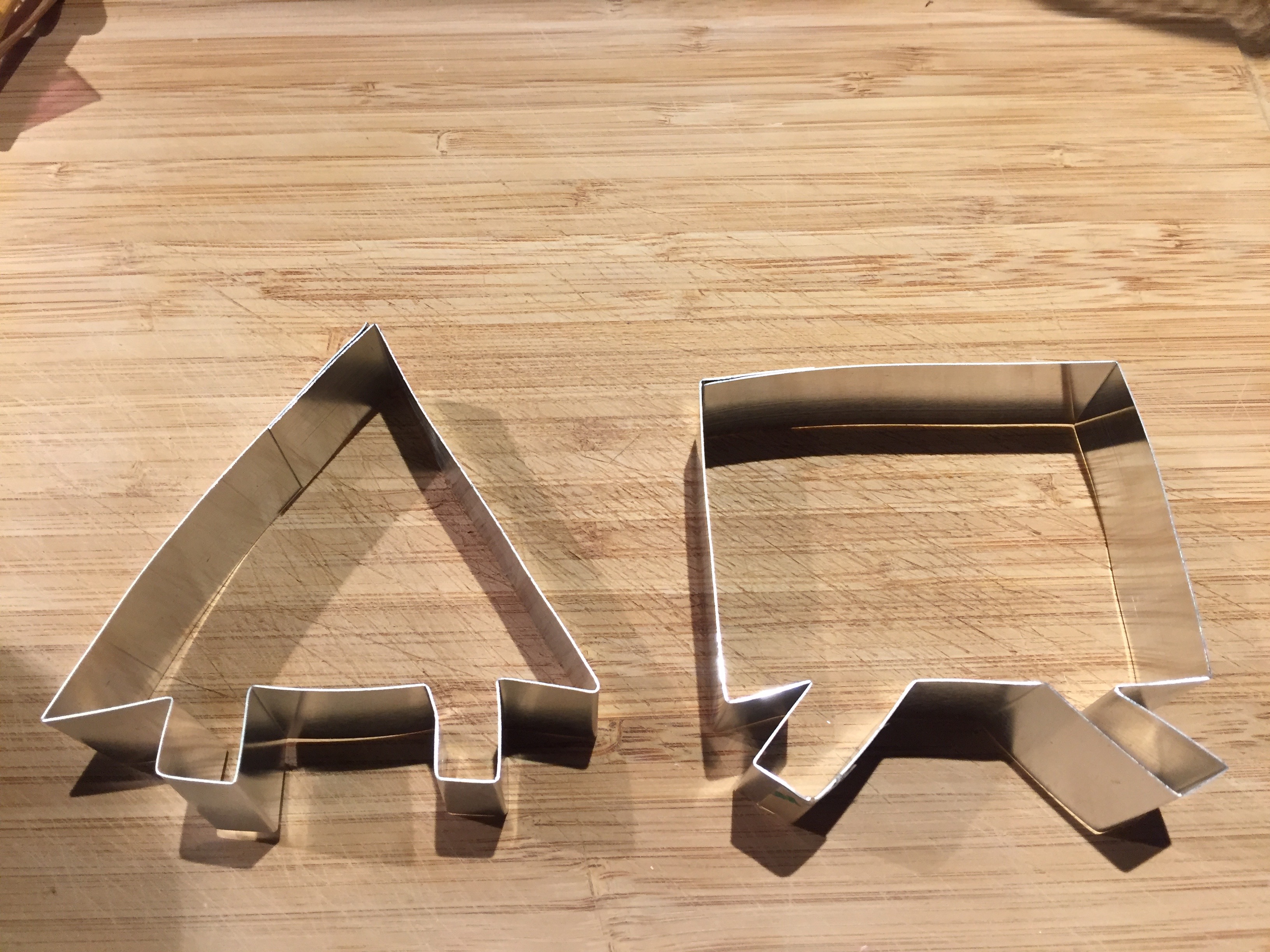 Harder than it looks to make all those bends in the metal! I’m looking forward to their book about Circle. 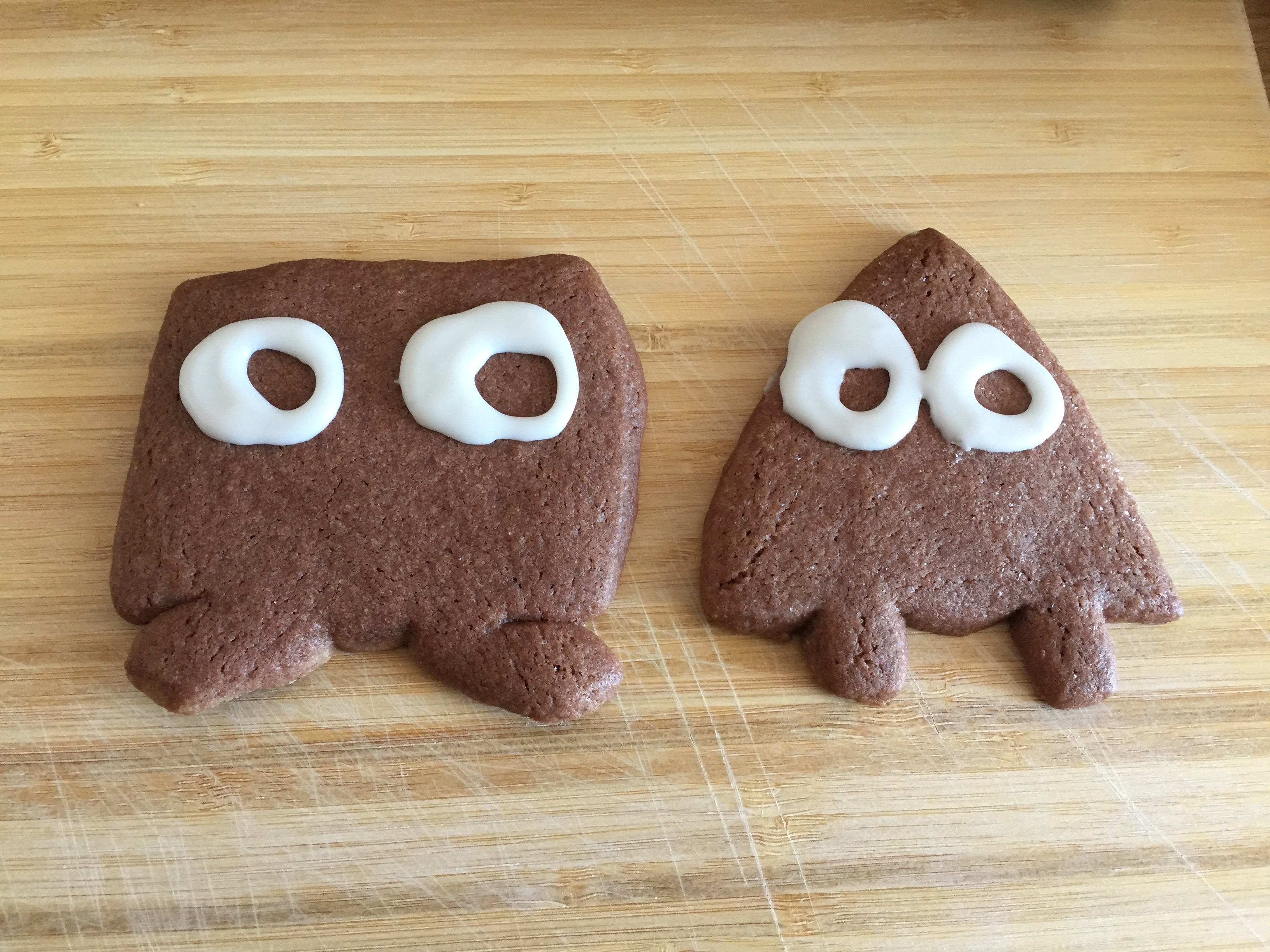 And that, my friends, is where I’ll leave you: contemplating cookies and books, two of the best things in life. Thanks for reading my posts along the way, and especially for adding your own comments to the blog! That makes my day. My year. My eight years!) Thanks to Diane Roback for her unfailing wisdom, and her patience with my late-night scrapings up against the deadline, to Josie who was a fantastic blogging companion, and to the current slate of marvelous, original, and FRESH bloggers Kenny Brechner, Meghan Goehl, Leslie Hawkins, and Cynthia Compton.

I realize it sounds as though I’m retiring from the blog, but I’m simply in a reflective mood thinking of so much time spent writing about the children’s bookselling life. It’s a pleasure! And I promise that when I run out of ideas and inspiration, I’ll hand off the baton to the next generation.

One thought on “Sneaky Triangles, and the Anniversary That Sneaked Up on Me”