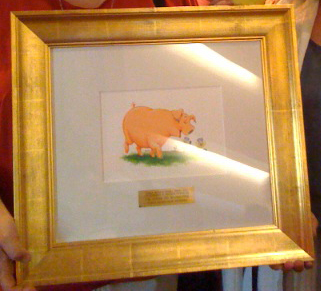 There’s a wonderful award given annually that recognizes excellence in children’s bookstores: the Lucille Micheels Pannell Award. Generously co-sponsored by the Women’s National Book Association (another fab WNBA!) and Penguin Young Readers Group, the award “recognizes bookstores that enhance their communities by bringing exceptional creativity to foster a love of reading and books in children and young adults.”

Anyone can nominate a favorite bookstore, including customers, sales reps, publishing folks, authors and illustrators, staff, owners, and managers of the store, and more. Once all of the nominations are in, the award committee (made up of a group of publishing professionals) notifies the nominated stores, who then submit supporting materials.

This is a *very* meaningful award for children’s booksellers, so please get the word out to nominate your favorite store. It’s easy to do; just see the instructions below. One caveat: check out the WNBA website’s list of past Pannell winners, so you don’t nominate a store that has already won.

(Lest anyone think this is a thinly disguised attempt to garner nominations for my own bookstore, I’ll mention that we were the lucky recipients of the award in 2008, an honor that was accompanied by a piece of framed original art—featuring a pig!—by the marvelous Chris Van Dusen. We proudly display it at the store, and the photo at the top of the post is from the day we received it.)

Happy nominating! Feel free to trumpet your children’s bookstore love in the comments section. I know that the booksellers from those stores will be aglow from your kind words.

The rest of this post comes directly from the WNBA’s Pannell Award press release:

There are two easy ways to nominate a bookstore for the WNBA Pannell Award.

2. Email WNBAPannell@gmail.com and include the following:

Nominations must be received by April 10, 2017. Then the Pannell Award committee will reach out to all nominated bookstores to request a formal electronic submission. Submissions should include a description of programs, events, activities, goals, and any contributions to the bookseller’s local community that focus on connecting kids to the love of reading. Photos, media coverage, letters from customers, and other supplementary material may be included in the submission.

Once the Pannell Award jurors have reviewed all submissions, the winning bookstores will be notified by phone and all submitting bookstores will also receive a call. Each of the two winners will receive a $1,000 check and a framed signed original art piece from a children’s book illustrator. The presentation of the award takes place during BookExpo at the Children’s Book and Author Breakfast, which draws more than 1,000 attendees.

Along with WNBA, Penguin Young Readers Group co-sponsors the award, which was established in honor of Lucille Micheels Pannell, founding member of one of the WNBA chapters. Established in 1917, WNBA (www.wnba-books.org) is a national organization of women and men who promote the value of the written word by championing the role of women in the book community and by providing a forum for the exchange of ideas and information about book lovers and professionals.

This year, the organization is celebrating its Centennial (www.wnba-centennial.org) with a range of initiatives. Among them are a lecture series called Bookwomen Speak: The WNBA Visionaries Series; the Women’s History Month Book-a-Day Program for the White House, members of Congress, and other officials; and Women in the World of Books: 100 Years of Leadership and the WNBA, a book exploring the innovative roles women have taken throughout U.S. history in shaping the literary community. The WNBA Pannell Award, along with our other ongoing programs, will be also be honored at our Centennial festivities in October in 2017.