If you’ve ever stood at the lip of the Grand Canyon and doubted that a mere image ever could do it justice, Grand Canyon the picture book might change your mind. Ever since I got a sneak preview last year of Jason Chin’s glorious new title from Roaring Brook’s Neal Porter Books, I have been eagerly awaiting its public release. The scope and quality of the illustrations are so impressive, from the tiniest fossil details to the breathtaking four-page gatefold spread of the wide canyon view. This book is an achievement at a new level even for this gifted illustrator. We were lucky enough to get to host Jason’s launch party on Saturday, and it was a blast!

The buzz leading up to the event had been terrific, with customers poring over the two endcaps featuring Jason’s backlist (one of them pictured below), eager for the new book. 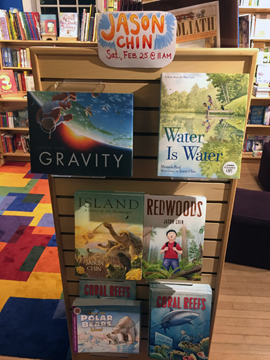 We also knew that Jason had done a great job getting the word out to his fans and friends. Many authors don’t even realize how effective their own mention of upcoming events can be, but their fans follow Twitter and Instagram feeds, and pay attention to opportunities to celebrate their favorite artists’ new work. Between the store and Jason’s social media mentions, we had enough advance warning of a great turnout that we knew we’d need to do some extra arranging of our space. And that would take time on Saturday before the event, but we couldn’t do it too long before the start time or early shoppers would be inconvenienced. That would have to wait for a half hour before we opened.

In honor of the book’s subject, our staffer Sandy had come up with the idea of trail mix as the perfect accompanying snack, so I shopped at the food co-op the night before for sunflower and pumpkin seeds, coconut flakes (the big kind), chocolate chips, dried cranberries, and nut-free granola (oddly, harder to find than you’d think!). The morning of the event, I toasted the seeds and mixed up the gorp, then headed to the supermarket for juice boxes, tiny cups for the trail mix, and helium balloons — which turned into another adventure, since I wanted 10 balloons, but each one took the helpful (but perhaps overly attentive-to-detail) florist 1:40 minutes to prepare. I didn’t have 20 minutes for balloons! It was like the scene in Risky Business where Joel is so panicked about time that the clock hand at school ticks in the wrong direction.

When I got to the store, it was kind of comical as the staff and I tackled several heavy bookcases on wheels, moving two of them out of the way altogether and shoving another two a foot to the west for extra space. In effect, we merged two store sections into one. Then we vacuumed the rugs and floor to make them spiffy for kid seating. We gathered supplies: easel, pad of paper, author gift. Then we endeavored to find the perfect spot to set up our ancient library movie screen and place the projector, which also involved extension cords we sort of remembered storing in the basement after the holidays, and duct tape, which was easier to find. The process required military precision — but we got it done anyway. 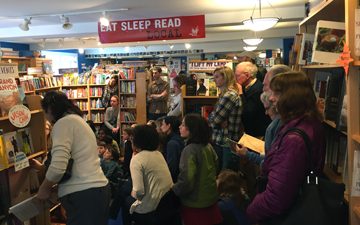 Meanwhile, people kept arriving and arriving. It was wonderful! And funny. Events are always a dance of details, and it’s amazing we come out of them with any photographs at all. But we did manage to take some, and customers contributed some of their own. 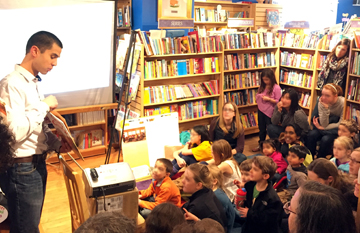 Jason’s presentation was terrific, and managed to rivet children from ages 3 to 16 (no easy task!) as well as their phalanx of accompanying adults. He started by showing pages of the book to the audience, leading them through the characters’ adventures, then shared some fascinating facts about the Grand Canyon (including the fact that, during its ocean incarnation, there were 40 species of sharks that lived there). He talked about the artistic process involved in making the book, from research to the time it takes to make each painting to the nerve-wracking process of packing up all of the originals  and sending them off, trusting in FedEx, UPS, or the USPS to get them safely to the publisher.

Then, he drew. Watching an illustrator create something beautiful on a blank page never ceases to enchant audiences. What is perhaps ordinary to the artist, borne though it is of long years of practice, is absolute magic to those of us without that artistic talent (well, talent + hard work). 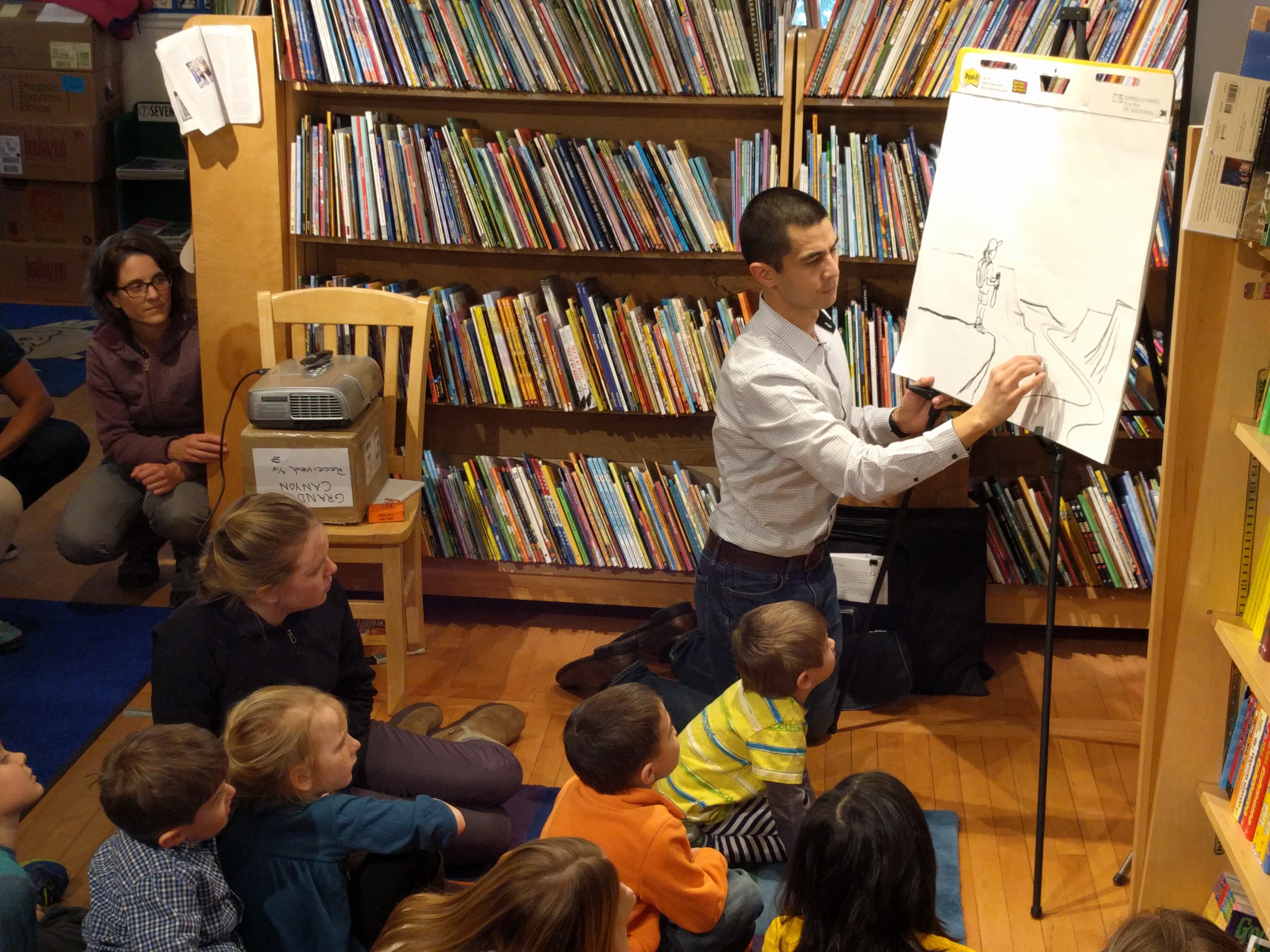 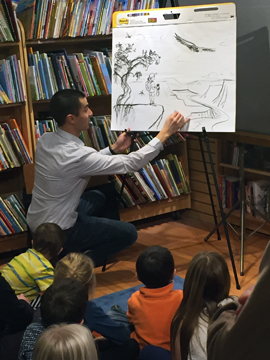 As a bookseller and a former school librarian, I always pay attention when teachers turn out for events. It means the authors are of special interest to schools, which is a great indicator of the likely longevity not only of a book but of the author’s career. There were at least four teachers at Jason’s Grand Canyon event. During the Q&A session, two of them raised their hands to comment on how much their students had loved a school visit from Jason. One added admiration for how his presentations varied, tailored to each age group he spoke with. A third teacher, from a middle school, introduced herself to Jason after the event and thanked him for creating books with so much great information for older kids as well as younger. All of the teachers, along with many of the parents, thanked us for making these kinds of opportunities available to the community. That appreciation for authors and books and bookstores creates such a lovely atmosphere at an event!

I haven’t said too much about the book because you really need to see it. It’s one of the most impressive books I’ve seen in a long while, and five starred reviews share that opinion. You can see some of the spreads on Macmillan’s website; they take a moment to load, but are worth the wait.

Bonus factoid: of all of Jason Chin’s science-based backlist titles—Redwoods, Coral Reefs, Island: A Story of the Galápagos, Gravity, and Water Is Water: A Book About the Water Cycle (the last written by Miranda Paul)—guess which is the very most popular? The first person to guess correctly in the comments will win a signed copy of Grand Canyon. (Only one guess per entrant, per couple, or per family.)

P.S. For more about Jason Chin and his work, see the lively discussion with him in Kathy Weeks’ Children’s Bookshelf Q&A.