At a Houghton Mifflin Harcourt dinner for author Benjamin Saenz (Aristotle and Dante Discover the Secrets of the Universe), several booksellers, and HMH director of field sales Jen Reynolds, gathered at a Minneapolis restaurant during Winter Institute. As happens at these dinners, the conversation ranged far and wide; this one covered everything from bootlegging and brothels in 1940s Mexico to poetry, depression, and art, to diversity in the children’s book field, to hookup patterns in 21st-century gay culture. In other words, your typical youth literature discussion.

Mr. Saenz was in Minneapolis to share his upcoming YA novel, The Inexplicable Logic of My Life (Clarion, March 7). As in Aristotle and Dante, the characters both are and are not himself, and friendship, family, and the recognition/creation of the self are at the core of the story. We all had a lot to talk about.

Long-table discussions tend to fall naturally into two groups, divided along table halves. But toward the end of the evening, Benjamin Saenz raised a glorious question, which brought the two halves together: “What is the book that made you fall in love with books?” He advised us against quick answers. He said he didn’t mean the first book we remember liking or even loving; he meant the book that made us fall head-over-heels, permanently and ineluctably in love with books.

I love this question. I hope you will answer it, too. 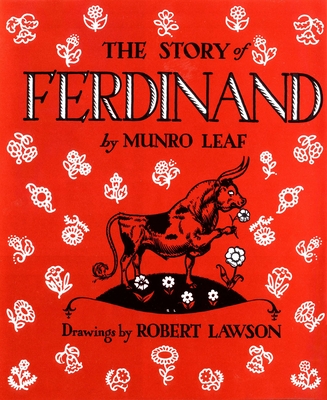 The answers at dinner were marvelous and ran the gamut from picture books to James Baldwin. The Story of Ferdinand was one bookseller’s deepest love, and that struck a chord with me. I had also loved the peaceful little bull who preferred, instead of charging the toreador, to sit in the ring and smell the flowers in the hats of the beautiful ladies in the stands. I know Ferdinand planted the seeds of valuing being patiently, happily, stubbornly true to one’s nature in the face of enormous pressure, and cultivated a lifelong appreciation of pacifism. But I’m not sure Ferdinand was the book that made me FALL IN LOVE WITH LITERATURE.

I also remembered being fascinated by Where the Wild Things Are and Hector Protector and As I Went Over the Water. I lived in Maurice Sendak’s drawings; they were funny and scary and mysterious and troublesome. There were beaks and pebbles and monsters and swords and hats and fierce, angry children who misbehaved. Those books stirred my imagination profoundly. Remy Charlip’s Arm in Arm ignited giggles and recitations from my sister and me, acting out the tiny playlets, the endless-loop jokes, the Alphonse & Gaston posturing, all the repeating, twisty-turny, clever wordplay and verbal and visual jests. I spent hours upon hours lost in the colorful loops of that book’s creative magic. But none of these were THE book. 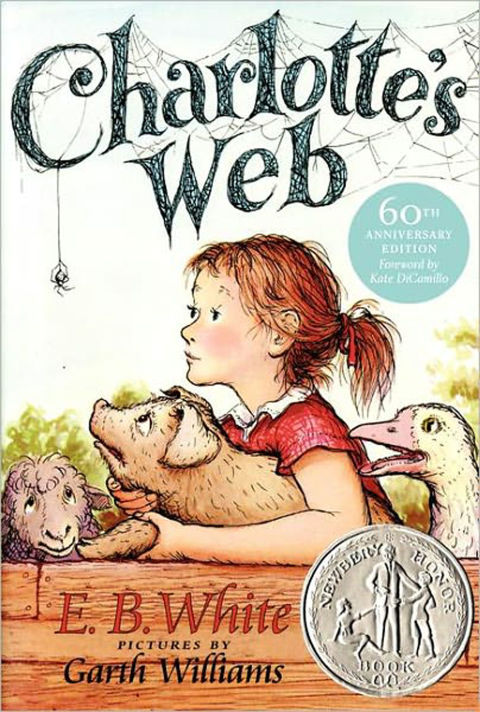 Charlotte’s Web was another contender. It was and is one of the only completely perfect novels ever written. I loved it wholly and uncomplicatedly, and like so many of you, I’ve often quoted those immortal lines: “It is not often that someone comes along who is a true friend and a good writer. Charlotte was both.” In fact, I used them at my Grandma Crys’s memorial service, because they so perfectly described her. The appealing round innocence of Wilbur, the irresistible, pragmatic mothering by Charlotte, the growing up of Fern, the humor of the gossipy animals in the barn, the villain Templeton with his rotten egg, the lurking farm realities underlying the enchanting pastoral charm… they are a concert of perfection. Charlotte’s Web was one of my touchstone books, and it is *almost* THE book. But it is perhaps too uncomplicated to take that highest spot.

Another of our dinner companions named The Little Prince, and again, that resonated with me. I can still recite whole paragraphs of that book (the old translation, not the newer and supposedly more accurate—but less poetic—version). It was odd and profound, both personal and distant, and full of observations one had never encountered before but immediately recognized as deeply and importantly true. “It is only with the heart that one can see rightly; what is essential is invisible to the eyes.” And ” ‘It has done me good,’ said the fox, ‘because of the color of the wheat fields.’ ” The proud, vulnerable rose, the laughing stars, the astounding baobab tree, the mesmerizing yet commonplace horror of the hat that is really a serpent who has swallowed an elephant! And the gratifying comment, “Grown-ups never understand anything by themselves, and it is tiresome for children to be always and forever explaining things to them.” Saint-Exupery understood the sorrow and joy of the child’s heart.

I used to make my college boyfriends read The Little Prince, insufferably insisting that they couldn’t really understand me without reading it. And yet, with all that, it wasn’t THE BOOK. There was a distance to it that, as much as I learned from it and loved with it, kept me from tumbling headlong inside it.

So what was the one book that made me forever and ever fall in LOVE with books in a deep and wholehearted swoon of total absorption, commitment, longing, and appreciation? I think my true love book has to be To Kill a Mockingbird. Devouring those pages one hot summer in childhood took me on a journey after which I was never quite the same. What is it about Scout and Dill and Boo Radley, Atticus and Calpurnia and Jem and Tom Robinson that stayed with me (and millions of readers) forever? They felt true. In addition to being a suspenseful, sometimes comical, always beautifully told page-turner of a story, To Kill a Mockingbird struck a great bell tone that rang out in favor of integrity, fairness, compassion, and courage, and showed us that, when coming up short against one’s own smallness and flaws, we needed to right the wrongs in ourselves just as ardently as we want to right the wrongs of others. It also revealed the evils of systemic racism and the dangers of small-minded assumptions.

In my reading life, there were certainly formative, even life-changing, books after To Kill a Mockingbird—but it was my first greatest love.

As we head toward Valentine’s Day, that holiday either loathed or loved, here’s a passion that’s easy to ponder: what was the book that made YOU fall in love, irrevocably, with books? Think carefully; your real answer might surprise you.