One day about twenty years ago, in the early days of the Flying Pig, a vigorous middle-aged woman walked up to the counter to make her first purchase. We needed to set up her customer account, so we asked her name. “Betty Miles,” she said. “Betty Miles!” I exclaimed. “There was a children’s book author I used to love by that name. She wrote a bunch of novels.” “Well,” she said, “That was probably me.” And it was.
It seems silly to say this, but maybe because I had grown up in Arizona and California, so far away from Vermont, and maybe because I’d read Betty Miles’ books so many decades ago, it had never occurred to me that I might run into a favorite author of mine so far from… my childhood? It was a lovely discovery, and I have hummed along happily for years with Betty as a customer, enjoying the sweet connection every time she walks in the door. But today I learned a new piece of information that rocked my world: in addition to those books I’d loved, it turns out Betty also wrote my very favorite story on the beloved anthem of my youth: the “Free to Be…You and Me” story, “Atalanta.” 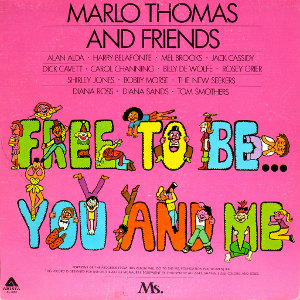 I still have my copy of this vinyl record. Just looking at it makes me smile.

In case you aren’t familiar with Free to Be, it was a 1972 book and record album that gathered together “stories for free children,” as Ms. Magazine called them. These were stories that defied gender stereotypes and celebrated gender and racial equality.The record featured Marlo Thomas, Alan Alda, Rosey Grier, Mel Brooks, and a host of amazing actors and singers performing poems, stories, plays and songs. It was a formative album for a generation of children, encouraging individuality, honoring children’s hopes and fears and feelings, and doing it all with humor and energy. There were 14 authors represented in the original book, and Betty Miles was one of them.
Her “Atalanta” was a retelling of the Greek myth about a strong, fiercely independent young woman. The original myth is fairly bloody; Betty Miles’ retelling omits the boar hunting and the beheading of the vanquished suitors, while keeping the core of the myth: Atalanta wants to choose her own future.
(I’ll be quoting from the story as told on the record album. It’s worth mentioning here that the back-and-forth storytelling of Marlo Thomas and Alan Alda is marvelous. Marlo Thomas reads Atalanta’s narrative and dialogue, Alan Alda takes the male narrative and roles. If you haven’t heard the album, it’s still available and so much fun to listen to.) Anyhow, back to Betty Miles’ story and why it was SO important to girls like me in the early 1970s. My childhood reactions are in brackets:
In Betty Miles’ version of the story, Atalanta’s father is a king who decides he must marry off his daughter, as fairy-tale kings are wont to do. He proposes a footrace, wherein the winner will earn Atalanta’s hand in marriage. Atalanta is a very fast runner, so she cleverly proposes an addendum: “‘Let there be a race,’ she says. ‘But you must let me run in it, too. And if I am not the winner, I will accept the wishes of the young man who is. If I am the winner, I will choose for myself what I will do.'”
[I loved this perfectly reasonable, yet tradition-bucking proposal. It was calmly stated but scandalously defiant; I couldn’t imagine standing up to my father this way. Of course, I was also in the second grade at the time.]
The king agreed to this. He would have his way, marry off his daughter, and enjoy a fine day of racing, as well.”
[The king’s insouciance always struck me as funny – and irksome. It was clear how differently he and Atalanta experienced the event: so casual a day for him, so vital a race for her.]
So Atalanta trains for the race, day after day. Unbeknownst to her, a young man from the town is also training just as hard.
On the day of the race, suitor after suitor tries to catch Atalanta, but each falls short, until the only challenger remaining is the young townsman, John, who keeps pace with Atalanta “until he ran as her equal, side by side with her.”
[The significance of the phrase “ran as her equal” was not lost on me.]
At first alarmed, Atalanta shoots ahead, but John manages to keep up with her. Atalanta is astonished. Then, “smiling with the pleasure of the race, Atalanta and Young John reached the finish line together, and together they broke through the golden ribbon that marked it.”
[I loved that phrase, ‘smiling with the pleasure of the race.’ It says so much in so little space, and leavens a consequential occasion with generosity and joy.]
The king tries to give Young the “prize” -– i.e., his daughter -– but John demurs. “Thank you, Sir. But I could not possibly marry Atalanta unless she wished to marry me. I have run this race for the chance to talk with Atalanta.”
[I absolutely LOVED John for this.]
Hearing this, Atalanta laughs happily. “And I could not possibly marry you before I’ve gone off to see the world. But I would like nothing better than to spend the afternoon with you.”
[That last phrase always made me laugh. Even though I cheered for Atalanta’s independence, her offer of ‘the afternoon’ did strike me as an amusingly paltry substitute for, you know, a whole lifetime.]
And then the story ends so perfectly I can hardly stand it:

“Atalanta told John about her telescopes and her pigeons, and John told Atalanta about his globes and his geography studies. At the end of the day, they were friends. That same night, John set off by ship to discover new lands, and Atalanta set off on horseback to visit great cities. The king stayed home and thought about how the world was changing.

“But now Atalanta is still off in the world, visiting towns and cities, and John is sailing the seas. Perhaps some day they will be married, and perhaps they will not. In any case, it is certain they are both living happily ever after.”

It would be hard for a girl today to understand how revolutionary this story ending was to a girl in the 1970s. This was the first fairy tale I ever read that told me I could choose a life of adventure, of independence. That along the way I might find boys who were my true friends, who wanted to stand beside me as equals, who valued my hopes and dreams as strongly as they valued their own. This story told me I could explore the world, at my own pace, and in my own way. This story was freedom. I can’t emphasize enough how important “Atalanta” was to my sense of self and possibility.
When Betty mentioned today, in an almost offhand way, that “Atalanta” was hers, I felt a huge, unexpected wave of emotion. My throat lumped up with a wallop of gratitude that overwhelmed me. I managed to keep the tears at bay, but I told Betty it was my favorite of all those favorite stories and songs, the one that meant the very most to me.
Later, at dinner, I told a friend that I’d discovered one of our customers was the author of “Atalanta,” and she immediately welled up with tears. “That story changed my life,” she said, telling me her own version of what I’ve just shared with you here. That story changed lives, indeed.
I don’t think Betty Miles has any idea how powerful her short story was for thousands upon thousands of girls.
I think of the authors today who are writing books in which children of color can see themselves, see lives unfolding with brilliant hope and potential, and wonder who, someday, will meet a bookseller 45 years later who will tell them, “You changed my life.” To those authors: keep writing. It means more than you’ll ever even imagine.

1 thought on “Ripples from a Life-Changing Story”