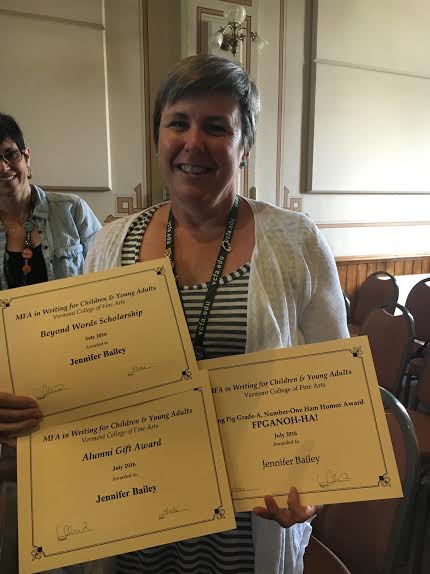 2016 Winner of the FPGANOH-HA! Award (and two others), Jennifer Bailey

Kenny’s charming post yesterday, The DDG Deserving Reader Award Takes Root, reminds me that I have been meaning to celebrate the newest winner of the Flying Pig’s award for as-yet-unpublished humor writing. Every year, we give this award to a Vermont College of Fine Arts student. Back in 2004, when I graduated from their fabulous MFA program in writing for children and young adults, there were several literary awards available to students, but, as with many awards,  they tended to go to more serious manuscripts; drama “weighs” more than comedy, although both forms take tremendous skill. So, back at work, we created the Flying Pig Grade-A Number-One Ham Humor Award, or FPGANOH-HA! (Pronounced, of course, eff-puh-gah-no-ha!, emphasis on the ha.)

Every year, VCFA sends the ‘blind’ (i.e., no author-identifying information) manuscripts to us at the Flying Pig, and our committee reads, laughs, and awards. We know the title of the winning manuscript, but often don’t learn the name of the winner until the actual awards ceremony at VCFA, when the program director, Melissa Fisher, hands us an envelope with the winner’s certificate.

Since 2004, we have had 12 winners and 3 honor recipients. Some of the writers have subsequently been published and others are in various stages of the writing and publishing process. All are incredibly talented. We are extremely picky about this award; we only give it when there is superior work to honor, work that does justice to masterful humor writers like E.B. White, Norton Juster, James Thurber, Roald Dahl, Jules Feiffer, Katherine Paterson, Christopher Paul Curtis, Kevin Henkes, to name a few.

The criteria are as follows:

This award is intended to celebrate, support, and encourage the inclusion of humor in even the most serious books for children. The full amount of the scholarship is $775 to use toward the next semester’s tuition. In the last couple of years, the VCFA Scholarship Fund has teamed up with us to contribute to the award. Thanks, VCFA!

Only unpublished writers are eligible to submit manuscripts; that is, contestants may not have had a book published, nor can they have published more than two stories, poems, and/or articles in a national magazine. Materials submitted (up to 20 pages in any genre) must not be under consideration for any other contest, or with any publisher or agent in any form or at any time during the judging process. Previous winners may not apply. The submissions are blind; the VCFA office has a cover sheet identifying the author, but the manuscripts themselves must contain only the title of the work.

This year’s submissions were especially good, and the winning piece was one of the funniest, most polished pieces we have seen in these 12 years, which is saying something. It was a clever, fresh, sly, delightful twist on a fairy tale fantasy world. The writing turned familiar tropes on their heads, with a light touch. I was eager to meet the winner.

At the ceremony, our award was fifth in the line-up. It is always a pleasure to hear the faculty singing the praises of the students who have won the awards. (Writers giving awards to writers tend to whip up some terrific, thoughtful, sometimes tear-inducing introductions.) The program is vibrant; the students and faculty are warm and enthusiastically supportive of one another. As I awaited my turn to present the award, one particular student had a very, very good day. When her name was announced for the first award given out, there was a giant whoop from the crowd and an immediate standing ovation. When her name was called for a second award, the crowd laughed and cheered again. Rarely does someone win more than one award. When I peeked in my envelope, this same name graced my certificate. Three awards?! Unheard of. This student is clearly on her way to great things.

America, keep an eye out for Jennifer Bailey!