You might think that shallow people miss out on a lot of the things which they are insensible to: faith, long-term conviction, the pursuit of a lofty goal, and so forth. You most likely also believe that it is obvious to outside observers that shallow people lack these things because, as Voltaire observed of himself, “I’m as small streams; they are transparent because they are shallow.”

It turns out that shallow and mordantly secular booksellers are not wholly immune to experiences of that sort. We feel loss and injustice. When the signature wrap of our store is discontinued, or a go-to handsell is not filled on an order because it has been placed out of stock indefinitely, we feel pain at the insensibility and injustice of the world in a manner not unlike our deeper colleagues.

What I am writing about today is no run of the mill, incidental sense of personally impactful wrongness, but rather a genuine fulfillment of a quest which involved perseverance, conviction, and, like most heroic endeavors, a little luck.

The 2010 incident that initiated my quest was, as you will have assumed, a severe matter. Our 2009 Stocking Stuffer of the Year Award Winner, and my all-time favorite sideline, the Atomic 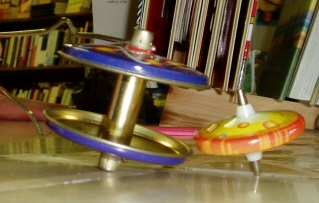 The Original Atomic Whirl-O on the DDG counter in happier times.

Whirl-O, was suddenly discontinued, not because it wasn’t selling, but because of a spat between the designers and the manufacturers. I refused to believe that it could disappear from sale.

The Whirl-O is not only a very zen and satisfying experience in terms of establishing and maintaining its rotational speed, but when tapped on a hard surface the top leaps off and keeps spinning. With skill it can be recaptured into its orbit. It can also, due to the wonders of magnetism, be lifted spinning back up into the air from a metal nib on the bottom of the orbiter. No toy that much fun to demo and sell, so certain of providing happiness to everyone and misery to none, could possibly disappear from the market. This belief did not die in me, even as the years went by, and I scoured the web time and again in vain and checked in fruitlessly with toy reps. The vagary of fate, the mad anarchy which had surrounded the Whirl-O’s disappearance did weigh on me, but I never gave up on my conviction that it would reappear.

At long last that profound conviction was rewarded during a routine phone call with my Toysmith rep. “Reunited and it feels so good.” (Peaches & Herb)

Ann: Have you looked at Original Toy Company?

Kenny: No, I’m all good. I still have plenty of the X-7 robots and astronauts.

Ann: They do have the Whirl-O now.

Kenny: What! What are you saying?! What Whirl-O are you referring to?! Where is it?! What page is it on? Is it the Atomic Whirl-O?

And there it was. And here it is again on our front counter, where it belongs. Yes the world is a shifting, opaque and uncertain place in which neither reason nor even sense are any sure guide, and yet, when the Whirl-O is whirling, such deep thoughts are subsumed and all is wonderfully transparent again.

4 thoughts on “The Once and Future Whirl-O”