Yetis have traditionally been understood to be solitary creatures, very rarely spotted and few in number. Looking at the fall lists, however, it is clear that we need to revise our understanding of Yetis. They are neither rare, solitary, nor hard to spot anymore.  In fact there are at least 10 children’s books featuring Yetis coming out between June and December. What has caused the Yeti to evolve in this extroverted manner? 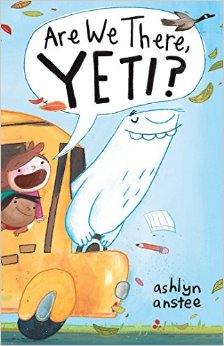 Surely the answer lies in the pages of all these new Yeti books. For starters we can see that the word itself is fun to play with, as evidenced by the fact that there are two separate books coming out this fall with the title Are We There, Yeti? The S&S marketing notes for the release of Ashlyn Anstee’s delightful version accentuate this point by noting that while the surprise trip which bus driver Yeti is taking the kids on is long indeed, prompting his passengers to repeat our title phrase many times, “The best surprise of all is yeti to come.” The children drive far into the mountains to the cave mouth of a Yeti school and all the kids have an outstandingly good time playing together. Anstee’s book embodies two key points of this season’s Yetis: they are fun-loving, and they are like human children but a little more so.

These themes are shared by The Thing About Yetis by Vin Vogel. These Yetis have all the fun human kids have playing in the winter except more so, they are positively frenetic. Not sure how to have fun in the winter, what better role models than Yetis? Dear Yeti by James Kwan sees the Yetis as winter guides too, but in a calmer, more parental manner. This book introduces the third key theme: caretaking. Two kids hike off in the winter hills to find a Yeti. The Yeti, mysteriously in possession of notes from the lost kids, invisibly helps them stay safe and warm during their adventure. The other upcoming Are We There, Yeti? by Kerry Morris inverts this caregiving paradigm by having a lost baby Yeti found by a Tibetan Mastiff who returns the baby Yeti to his Mountain dwelling parents. 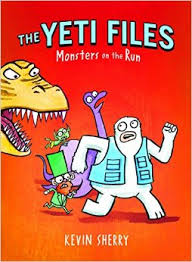 This fall will also see the second book in Kevin Sherry’s terrific series The Yeti Files, which has proven to be just the thing for reluctant readers. This book further establishes that the loneliness which had previously marked Yeti existence has passed on now, to the point that the Yeti clan is looking to pay its remission forward by taking an interest in helping out other monsters who are still experiencing loneliness, like the Loch Ness Monster.

This bring us back to a signal question, can Yetis survive their discovery? How long can they remain frontlist darlings once the newness of their real nature wears off? Perhaps not at this pace, but given that Yetis are all about outdoor fun, survival, and caretaking, which are mainstay picture book and early chapter book themes, they should continue to thrive long after this wave of celebrity has crested. Certainly they are handling the attention much better than many human celebrities do. Role models indeed!