I haven’t ranted in a bit, so the time felt right for a fresh bit of ire. Let’s talk about book covers for a minute, and publishers’ need to keep changing them. I understand sometimes the need for shifting a book’s image once the paperback comes out, but the re-doing of covers of books that have been out for years in paperback often leaves me flat or just plain scratching my head. Here’s the thing: I could no more design a book cover than I could perform surgery. It’s a complex process that requires infinite skill and artistry and I’m in awe of what book designers can do. And so often, I’m stunned by the genius in the covers. But as a bookseller who has to field question after question about why a beloved cover has changed, not being able to offer an explanation is maddening. 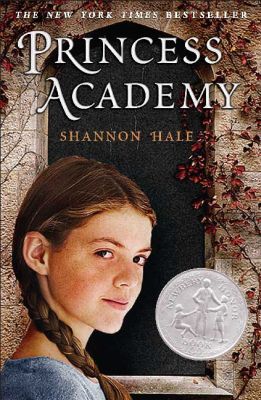 Take for instance Princess Academy  by Shannon Hale, a book that I adore and sell well at my store. The old cover is on the left. I looked up the age range for this edition of the book and it says ages 9-11, which strikes me as young, since the protagonist is 14. However, the font is mature, and fitting for a fantasy about princesses and an academy, even a makeshift one. It all seems very real and somewhat serious, and the girl looks intelligent and seems like she can take care of herself. She doesn’t look like a 14-year-old, though, which was my only complaint about this cover.

When I heard they were redesigning the 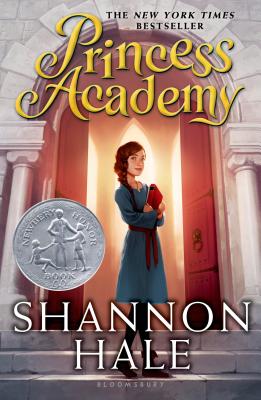 cover, I was expecting something that looked even older. Instead, the new cover is even younger. The font is almost cartoonish and Miri looks even younger. Certainly she doesn’t look like a 14-year-old, more like a 10-year-old. And the light coming from behind the her, illuminating the seemingly hallowed halls of the Academy, somehow remind me of Harry Potter and Hogwarts. I looked up the age range on this new cover, fully expecting it to be the same as the other cover and was very surprised to see that it’s listed as actually older, for 10- to 14-year-olds. This doesn’t make sense to me; everything about this cover skews younger. I understand why things need to be updated, but sometimes I wish publishers would ask booksellers’ opinion before they change covers. 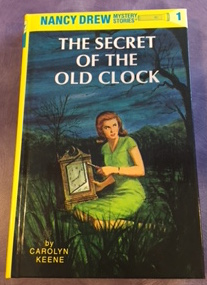 While the changes in Princess Academy are relatively minor, sometimes there’s a massive change in covers that I just don’t grasp. I loved the Nancy Drew books when I was a child. The iconic yellow and blue paper over board covers, with their slight sheen, always had me excited for the next mystery adventure. It never occurred to me that these covers would change, but change they did. Gone is the bright yellow and the deep blue, to be replaced with muted russets and murky blues. In the old cover, Nancy is taking a clock apart. She looks active and smart. She looks like someone who is capable and somewhat fearless. 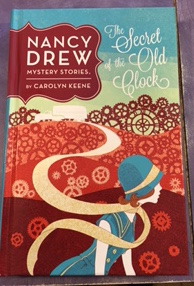 The new cover shows Nancy’s face in profile with her long scarf leading down the road to the motor home. This imagery has led more than one customer to comment that it looks like her scarf is wound up in the vehicle thus possibly replicating an Isodora Duncan-like possible death. This new Nancy looks like she needs help to cross the road, let alone being able to solve a complex mystery. She’s not dressed for mystery, she looks like she’s ready to hop in a convertible and go for a spin on her way to the flapper dance hall.

In my very non-scientific poll, not one customer, young or old, has liked the new cover. Some of that is nostalgia, of course, but the reactions are pretty visceral. The new cover with its cursive title, doesn’t match the interior font, which has not changed. As one customer said, “The title font isn’t having a conversation with the rest of the book.” But the thing that’s making people nuts is the passivity of the new cover and the lack of focus.

So readers, what do you think of the cover changes? And, has any cover redesign left you bereft for the old book?