When author James Kennedy tossed a question to the Child_Lit listserv asking for the shortest Newbery books, I was intrigued. Usually, adults aren’t the ones asking this question; it generally comes from beleaguered kids three weeks behind on a book project. So I was delighted to discover the reason behind Kennedy’s question: it had to do with his 90-Second Newbery Film Festival, a fantastic project that invites students all over the world to compress the stories of Newbery Award and Honor books into videos just one-and-a-half minutes long. The films can be live-action, animated, Claymation, anything at all that fits the criteria. Recently, a film school in Denmark asked Kennedy for a list of the shortest Newbery books to help plan their participation in the 90-Second Newberys, and he wanted to make sure his already considerable list wasn’t missing anything. A noble cause.

With the ALA Youth Media Awards less than a week away, I couldn’t resist interviewing Kennedy about the unique and wonderful way he dreamed up to celebrate children’s literature’s finest books – including some of the best quirky, twisted, funny, smart 90-second clips from his festival.

ShelfTalker: How did the simply brilliant concept of the 90-Second Newbery project come to you? 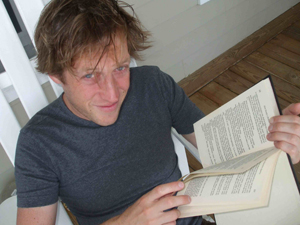 James Kennedy: I’ve always loved short films. The stakes are lower, so they have the freedom to be weirder. (Any Channel 101 fans out there?)

Like many people, ideas come to me when I’m bored and stuck someplace. I was trapped in a work meeting when I tried to write a quick script that summed up A Wrinkle in Time in a minute. Retelling stories quickly was already a thing on the Internet. For a while the BBC was doing 60 Second Shakespeare.

Then I thought, why not shoot this script? I’d never made a movie before. But I got my niece and nephew together with their friends and we shot it in a day. I took another few days to edit it in iMovie. I published it, with a call for more 90-Second Newberys, and I was astonished at the response – more than 100,000 views in just a few weeks!

Here’s the “Wrinkle in Time” video that started it all off:

“A Wrinkle In Time” In 90 Seconds from James Kennedy on Vimeo.

We received more than 100 submissions the first year, and that number has grown every year! We had the first screenings of the 90-Second Newberys at the public libraries in New York City, Chicago, and Portland. Over the past four years we’ve expanded to San Francisco, Oakland, Minneapolis, Tacoma, and many book festivals and library screenings. It’s taken on a life of its own, and I’m delighted with the response. We received over 200 submissions for the 2015 film festival.

ST: What is the most surprising 90-Second Newbery clip you’ve encountered?

JK: This is not so much one particular clip, as it is a tendency. Let me put it this way. I get a lot of 90-Second Newberys based on The Giver. That’s not surprising – it’s dystopian, it’s short, and it’s assigned all the time in schools. As everyone remembers, The Giver is frequently banned because of the queasy scene in which a baby is euthanized. Well, for some reason, kids making 90-Second Newbery videos love remaking this scene, spending upwards of 10 seconds of their allotted 90 seconds gleefully depicting it.

To see what I mean, I put together a highlights clip of all the infanticide scenes from all the 90-second versions of The Giver I received. It’s both harrowing and ludicrous.

“The Giver” 90-Second Newbery Montage from James Kennedy on Vimeo.

As a runner-up, here’s a video that is hilarious but is too adult to show at the film festival. Author Lynne Kelly made this computer-animated adaptation of Susan Patron’s 2007 Medal winner The Higher Power of Lucky. Remember the controversy that kicked up because the book used the word “scrotum” in the first chapter? Well, so does Lynne:

ST: What are some of the most interesting ways this project is used by schools, libraries, and other bookish folks?

JK: I like it when people use the film festival as an excuse to highlight old or nearly-forgotten books, and bring attention to them in a new way.

Like how about William Bowen’s 1922 Newbery Honor book The Olde Tobacco Shoppe: A True Account of What Befell A Little Boy in Search of Adventure done as a bonkers puppet show?

I especially like it when folks switch up the genre of the book they’re adapting. For instance, how about a horror version of Charlotte’s Web?  [ShelfTalker note: see the clip and more commentary about this one toward the end of the article.]

ST: Do you think this film festival will help inspire all those nascent Robert Altmans, Jane Campions, Steven Spielbergs, Sophia Coppolas, and Coen Brothers out there? I’m thinking especially of kids like Jennings Merganthal, who created this year’s video based on Steve Sheinkin’s Bomb:

JK: Oh, I hope so! Jennings has submitted fantastic stop-motion entries almost every year, always based on a nonfiction Newbery winner. If you liked his adaptation of Bomb, you should also check out his adaptations of An American Plague and also of the very first Newbery Medal winner, The Story of Mankind.

I can’t help but feel creating a 90-second video is good training for a budding director. With repeat submitters like Jennings, you can see him improve year by year. When you have only 90 seconds or so to work with, you must make every frame count. Kids soon learn you can’t just set up a video camera and mumble a play in front of it – you must learn how to tell the story visually, how to frame a shot, how to cut, how vary the types of shots, even how to handle lighting and sound. With the tight time limit, you can’t rely on windy dialogue to explain the story, you have to do it with images, which the mind processes much faster. And with the shoestring budget most of these movies are on, you can’t rely on ridiculous special effects – although some groups do go the extra mile and do elaborate green-screen work or even put in Star Wars-type lightsabers and lasers.

ST: What are your hopes for the 90-Second Newbery project?

JK: I hope  it continues to grow to even more cities, and I hope I keep getting great movies from these talented young filmmakers every year!

ST: Are you currently masterminding another fantastic idea that brings kids and books together?

JK: I’m currently masterminding writing another book. The 90-Second Newbery is a lot of fun, and I love doing it, but The Order of Odd-Fish came out in 2008. I need to write too!

ST: Is it possible for bookstores, libraries, and schools to hold screenings? If so, how might they go about setting that up, getting the appropriate permissions, and so on? I’m also thinking this would be a fantastic kickoff for schools to inspire their own students to make 90-Second Newberys.

JK: Do you mean having me come out to visit the bookstore/library/school and host a screening of the 90-Second Newbery myself? If so, they could just email me and we could set it up.

Or do you mean the school just screens 90-Second Newbery movies that have already been submitted? Almost all of the 90-Second Newberys are publicly available on YouTube or Vimeo. I suppose if something is already publicly online, it can be shown, right? In any case, once again it’s probably best to email me – I can give advice on what the best movies to show are, and how to make a screening go smoothly.

Or do you mean that the bookstore/school/library holds their own 90-Second Newbery contest, screening movies made in that community? In that case, I guess it’s not necessary to contact me, but I hope you do, so I can see the movies! If folks want to do their own 90-Second Newbery Film Festival screenings to kick off a program where the kids make their own videos, here are 25 successful 90-Second Newbery movies, done in a variety of styles, to inspire them:  http://jameskennedy.com/2013/07/04/the-25-most-popular-90-second-newbery-videos-so-far/ 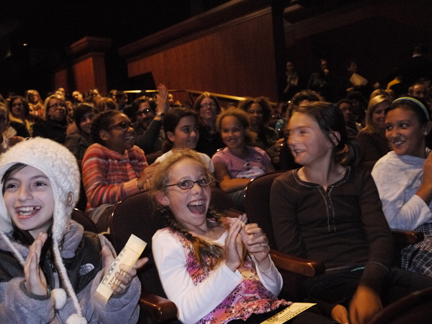 ST: How can readers see the 90-Second Newberys on the big screen?

JK: Over the next two months we’re putting on free gala screenings of the best entries at libraries in New York City, Chicago, San Francisco, Oakland, Minneapolis, Portland, and Tacoma, co-hosted by me and other children’s authors. As every year, these kids’ movies are by turns ingenious, hilarious, and impressive! I’m proud to share them.

If you happen to be in any of the cities on the dates below, I think you’d enjoy the show. Here are some of the highlights from this year’s crop of 90-Second Newberys:

*Reimagining 1953 Honor Book Charlotte’s Web as a horror movie. A must-see. These teenagers from the Schaumburg Public Library are on to something: after all, the book’s first line is “Where’s Papa going with that ax?” The plot hinges around a spider using unnatural powers, at any moment our hero might get butchered/devoured, and it ends with thousands of spiders monstrously spawning . . .   https://vimeo.com/116901594

*A Claymation adaptation of 1939 Honor Book Mr. Popper’s Penguins. Made by an ambitious girl scout troop from Urbana, Ill., this is resourceful and awesome! http://youtu.be/7mnp0ODvIig*A special effects extravaganza of 2009 Medal winner The Graveyard Book. All that green screen work! And how many kids did it take to operate that terrifying giant “Sleer” puppet? https://vimeo.com/116188078

*A stop-motion version of 2013 Honor Book Bomb. Made by a lone teenager, Jennings Mergenthal in Tacoma, Wash., this is seriously impressive, funny, AND informative. http://youtu.be/sGGYriowyEk

If you or any of your readers are interested in attending, below are the screening dates, co-hosts, and links to reserve one’s (free!) seat for the film festival.Sunday, January 25, 2015 The CHICAGO screening at Adventure Stage Chicago (Vittum Theater, 1012 N Noble St, Chicago, IL). With co-host Keir Graff (The Other Felix). 3-4:30 pm. Reserve a seat. 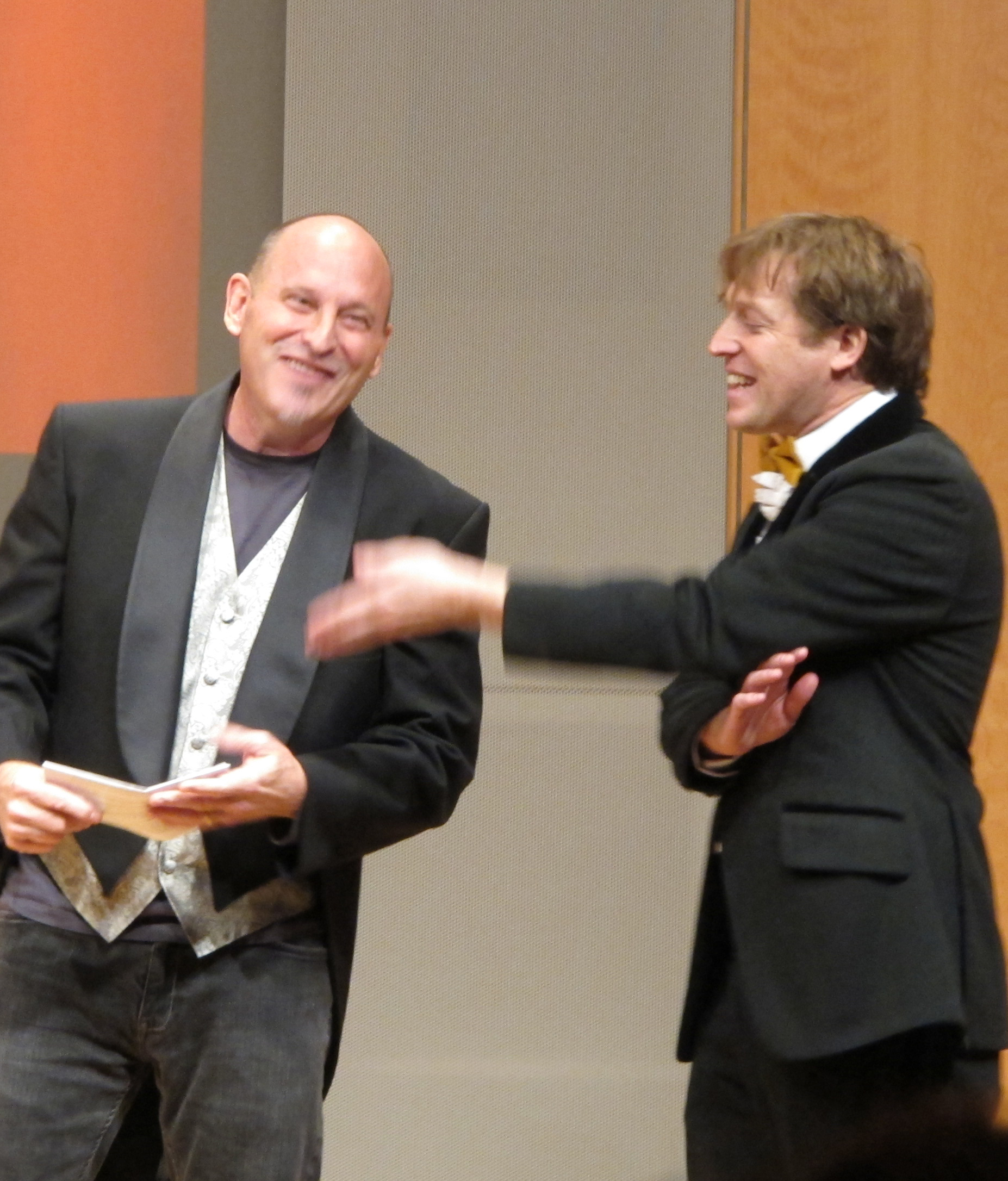 From a New York Public Library screening of the 90-Second Newbery Film Festival. See? This IS our version of the Oscars!

All the details about the film festival, including details of the screenings, rules, and a few of the best videos I’ve received, can be found here: http://www.90secondnewbery.com

ST: Thanks so much for talking with us, and for creating such a fabulous event!