Every year, my literary agent, Erin Murphy, and her crack team of co-agents and office gurus put together a retreat for their clients. The retreat moves around the country from one region to the next, and this year, it was held in Vermont. Sixty-seven talented, funny, crazy children’s book writers and illustrators descended on my unsuspecting state, pretty much doubling our population.

And why on earth might this interest you, dear Reader? Well, because among those authors and illustrators are eight musical souls who have banded together, literally, to reveal the inner workings of an author’s brain. (Psst: It’s scary in there.) The band is  called Erin Murphy’s Dog, and their motto is “In bocca al coniglio,” a faux-mild children’s-book-worthy appropriation of the galvanizing Italian phrase “in boca al lupo” (literally, “in the mouth of the wolf,” but it means “break a leg!”). 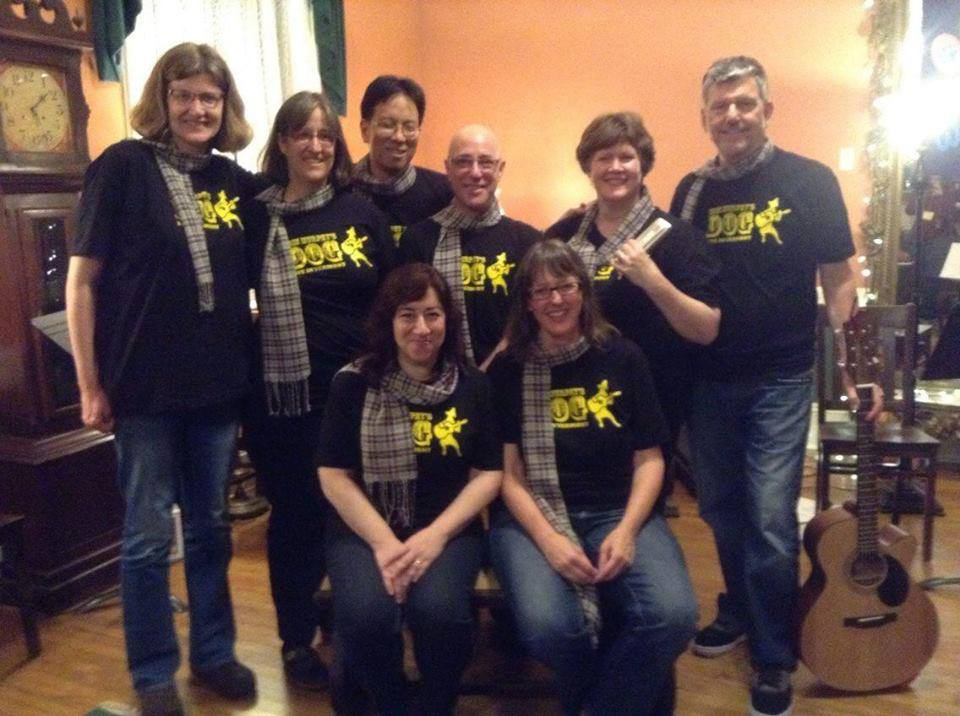 The band performed to a wildly appreciative crowd of agency mates, and two of the songs were particularly amusing for anyone involved in the children’s literature field. So it is my great pleasure to announce the world premiere of “Editorial Delay” and “YA Cha-Cha Blues.”

Not only are the songs clever and funny, they offer other gifts. In the words of band member Mike Jung, “These songs have it all – intensely complicated ukulele chords, 12-bar blues wizardry, freewheeling choreography, author/editor humor, and a broad variety of Muppet-like facial expressions. Also, a lot of love, because I love these people with all my heart. IN BOCCA AL CONIGLIO!”

Big thanks to Erin Murphy’s Dog for permission to post these videos, with extra gratitude to agency mate, e.E. Charlton-Trujillo, who did the three-camera video recording of these songs and synced the sound and color-corrected on the fly to meet this ShelfTalker deadline!

Erin Murphy’s Dog – YA Cha-Cha Blues (words and music by Conrad Wesselhoeft, in response to a conversation he had with agent and super knitter Erin Murphy about how the writing life can be back and forth … and back and forth) from e.E. Charlton-Trujillo on Vimeo.

Adoring fans are welcome to leave comments (but not flowers or flung underwear) below. As Erin Murphy’s Dog would say, “Arrroooo!”