Every so often we are fortunate to have a blog post written by our friend Kenny Brechner of DDG Books in Farmington, ME. Today’s post finds Kenny and the goddess, Athena, chatting about the very timely topic of stocking stuffers. This post is as funny as it is informative. 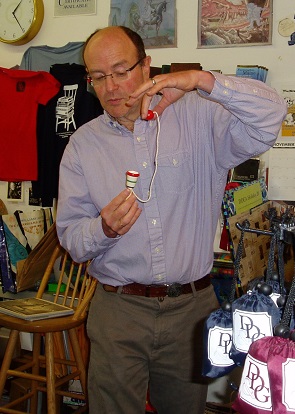 At DDG, our quest to provide the best Stocking Stuffers of all time is a serious affair. Measuring the fun and pleasure afforded by games and trinkets is no laughing matter. This year, for our annual Stuffing Stuffer of the Year Awards, due to the intensity of the competition among the occupants of our fun laden displays, we felt the need to bring in an outside expert to do the judging.

Many of you may know Athena as the Goddess of Wisdom, yet she is also the Goddess of reason, intellect, strategy, handicrafts, and as it turns out, bookstore holiday sidelines

Kenny: Thank you so much for taking the time to judge this year’s sidelines.

Kenny: I had no idea that you were the Goddess of toys and games, but it does stand to reason.

Athena: Very humorous. But yes, Kenny, a great toy or game is rooted in 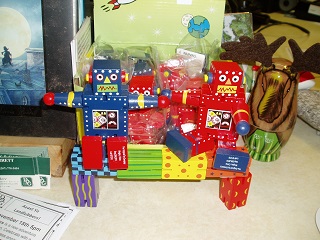 strategy, intellect and craft. That very froth of pleasure you mortals call fun is but its yield.

Kenny: Were there any terrific games from ancient days that have been lost?

Athena: Oh yes. My protege Odysseus, for example, created a game of strategy to while away time at sea. He delighted much in challenging me at it.

Kenny: Really! Did he ever best you?

Athena: Only once. He handled it well, and I too showed restraint. Beyond turning one of his oarsmen into a seabird I let the result stand.

Kenny: You are a model for us all to be sure. All right then we have four categories this year, Most Shockingly Good Value, Most Fun, Best Game of Chance, and Most Successful Re-Imagined Classic. Where would you like to start?

Athena: Well for Most Fun I have selected the Phlat Ball Jr. As a deity I am drawn to metamorphosis and transformation and this amazing object is a disk which, when thrown, transforms to a ball. Truly it is a marvel. I also gave serious consideration to the Flying Sock Monkeys. They are fun to shoot through the air and make a satisfying wailing noise when they land.

Kenny: Very true. And after all few things have more pronounced literary connotations that flying monkeys. And what have you selected for Most Shockingly Good Value?

Athena: That was easy. The Mini Wooden Catch Ball is only $1.99, made of wood, and endlessly entertaining to play with. Here, try one out.

Athena: Well captured. Now see how many you can do in a row. All right then, moving on to Best Re-Imagined Classic, this was a particularly tough one as you have some terrific items, such as Magnetic Sculpture, and Tangle Jr. Still, I have to declare The Robot X-7 as the winner. This adaptation of a Jacob’s Ladder into robot form is just brilliant.

Kenny: Totally agree! Have you tried to make it stand on one leg?

Athena: Interesting. I see what you mean. And finally we come to my favorite area, games of strategy. You have some outstanding ones, I really love 20 Express, for example, but one game you have truly embodies an ancient principle of elegance. The most deeply strategic games have the simplest rules, consider Go, for example, which was created by my Chinese colleagues the Baxian. Kyro 5 is such a game. It takes but a moment to learn but is highly strategic and most enjoyable to play. Would you like to try a round with me?

Athena: I notice that your staff just ran out of the store in terror.

Kenny: I take that as a compliment.