Tuesday evening I had the pleasure of selling books at a joint event with the Shelburne and Charlotte libraries, which hosted Howard Frank Mosher. Howard is another example of a great writer who calls the Green Mountain state his home. He came to Shelburne Town Hall to talk about his newest book, The Great Northern Express: A Writer’s Journey Home. 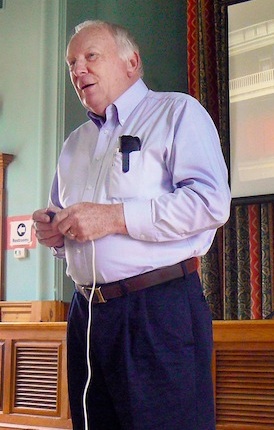 I’ve met Howard before, but had never seen one of his presentations. This man is not only funny (hysterical, actually), but he’s extremely passionate about independent bookstores. Howard started his three-month  journey five years ago after successfully completing radiation therapy for prostate cancer. His book is about his 20,000-mile journey across the country in the Loser Cruiser, a seriously beat-up Chevy Celebrity, to visit as many independent bookstores as he could.

A lot of authors love independent bookstores, but in Howard I sense someone who truly grasps not only the fragility of our trade but the richness we provide to our communities. Listening to Howard recount his journey was a travelogue of just about every indie bookstore in the country. He went everywhere, stopping at Wild Rumpus where they had a free-range chicken in the store, to That Bookstore in Blytheville where Howard heard the story of a young writer seeking the help of the owner, Mary Gay Shipley, with a manuscript. That writer wrote two decent novels, and then the third one was the hit. The writer was John Grisham and his loyalty to Mary Gay extends to every book he’s written since, as he signs the first 500 for her store.

Howard was warm and clearly enjoyed recounting his tales with us. There was the encounter with a mother moose who had saw Howard as a threat to her baby. The audience was laughing along with him as he told us how he held up his organic coffee and said, “Stop Moose,” to no avail and then booked it to the hotel entrance just to the left of the now incensed very large animal. There is a joy to Howard that is infectious. The crowd of more than 70 was rapt and laughing throughout his presentation. Peppered throughout his talk, complete with slides, was his love of the uniqueness of indies. In fact, out of all the stores he went to, the only store where absolutely no one came to the event was the only chain store he went to.

He has made it a mission to explain to audiences why indies are important to their communities, why indies are important to writers (just look at Mary Gay Shipley with John Grisham), and how indies help to keep all ranges of books available and how indies help maintain the myriad of editorial voices that can champion a small book and give it the space it needs to thrive.

Howard’s website reflects his dedication to indies. On the “books” page, the order of where to purchase the books is: Galaxy Bookshop, his local bookstore (and a real gem of an indie in Hardwick, Vt.), Indiebound and then Amazon. People, book lovers especially, notice where the Amazon links are on author’s websites.  That Amazon is listed third is breathtakingly refreshing. It’s a sad fact that when other authors list on-line sources alphabetically Amazon is always first and Indiebound, well, isn’t. I love that Howard lists Galaxy first. He is supporting his local store and making a conscious decision in doing so.

Everyone who got a book signed shared a personal story with him about his books. One woman brought up a very beat-up copy of Disappearance purchased in 1982 for him to sign. It was fascinating to see her go from wanting the book signed just to her – it was one of her favorite books of her first year of college – to then have him add the names of her sons (the oldest is graduating from high school next month) and her then husband. I know this because Howard chose to sign, not at the table we’d set up, but standing a foot away from me while I rang up sale after sale.

I was charmed to bits and will laugh about a lot of his stories for a long time. But more importantly, I feel like that with someone as eloquent and charming as Howard preaching about why indies are important, more folks might just get it the way he does.

3 thoughts on “Howard Just Gets It”