My store is in a small town in Vermont. There is no food except pizza that can be delivered to work. So yesterday was a lovely surprise.

A father and son came in and made our day. The son, Sloan, was looking at colleges with his very well read father. They were on a tour of a local college when they split from the group and sought out a bookstore. This is what they do when they travel. Their goal is to go all 50 states by the time Sloan is 18. They have 10 to go in a year. They also stop at bookstores in all states. And only indie bookstores.

I loved them. Kelly, my co-worker, and I, spent the better part of an hour recommending books to the Dad that we loved that he hadn’t read. It was almost like a contest. It felt like he had read everything. We went through all our favorites. The guy had read all of them. It was unreal: Dorothy Alison, yes. Christopher Moore, yes. Michael Chabon, of course; every Richard Russo book; even Gerald Durrell. Sloan was just as well-versed. They didn’t like mysteries, but were just as partial to women authors as men.

We switched gears and suddenly we found some books these guys hadn’t read. The Human Comedy, Ceremony, The Sherlockian, Never Let Me Go, Perfume and Unbroken, to name a few. Each book had to really be pitched. The man was fussy, but not in an irritating way. He was the kind of reader who can anticipate the moods he might be in for the rest of the trip and get books to complement them. 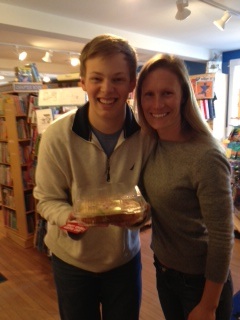 Sloan and Kelly with the lobster rolls..

They had mentioned that they were going to Maine ostensibly to look at colleges, but really to have lobster. Kelly told them that real Mainers eat their lobster cold and they looked horrified. Both of them expressed their desire to eat hot lobster with lakes of melted butter. Kelly then told them where to get the best lobster roll – just up the street at the deli inside the local liquor store.

They left with three bags of books. We wished them well on their journey and I told Sloan that, should he come back to school at the University of Vermont, he should come back and say hello. He smiled broadly and left to drive to Maine with his dad. Or so we thought. Half an hour later, he returned with two lobster rolls for me and Kelly.

I’m not a fan of lobster, but I had a bite of the roll and I must say, it was delicious. In the whole time we’ve been open, only one other customer has brought me food, and her family owns a diner down the road. But never have first-time customers, in fact people who will likely never shop at the store again, gone out their way to bring us food.

What a lovely way to spend a Monday.

10 thoughts on “When Strangers Visit”