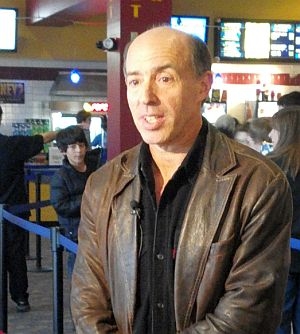 We may live in a small state, but big things do happen here. On Sunday, we had the opportunity to sit in on a Q&A session with Hunger Games movie producer, Jon Kilik, who who addressed everything from why the Cornucopia is gray instead of gold to (sort of) why Peeta didn’t lose his leg.

Kilik graduated from the University of Vermont in the 1970s and still has strong ties to the community. He spoke to two groups of moviegoers at special ticketed showings at the Williston, Vt. Majestic 10 movie theater after the screenings. (To make the $20 ticket fee even more worthwhile, the event was a fundraising effort for the UVM Film and Television Studies Department, in memory of a beloved professor, Lucille Jarvis, and it raised about $5,000.)

Before the Q&A, we hadn’t realized just how impressive and varied is Mr. Kilik’s resume. He’s produced some of the most provocative, beautifully made, unconventional films of the past 25 years, including Do the Right Thing, Malcolm X, Dead Man Walking, Basquiat, Pleasantville, The Diving Bell and the Butterfly, Berlin, the upcoming The Comedian, and many more. He’s got nearly 40 films to his credit, from comedies to intense dramas to documentaries. His interest in telling true stories both faithfully and dramatically helps explain why The Hunger Games stays so close to the book. (Also helpful, of course, was Suzanne Collins’s role — she’s an industry veteran — as screenwriter and executive producer.)

What follows is as close a verbatim accounting of some of the questions and answers as my thumbs could manage on my iPhone. My fingers were flying! The audience members came up with some terrific questions, and I was impressed by Mr. Kilik’s thoughtful, good-humored responses. He was wonderful. I’ve paraphrased anything I wasn’t able to quote exactly, so you’ll be able to distinguish between what he actually said (in quotes) and what I took away from what he said (not in quotes). Often, he said much more during a response than I could capture. It was a treasure of an opportunity for someone who loves both books and film, and I’m still aglow at having been there.

For a more proper interview (and there are many out there!), check out this one in Vermont’s arts weekly, Seven Days.

Q: You’ve never made this kind of movie before [not sure if the questioner meant a movie for kids, or a dystopian action film]. Why did you decide to do this one?

Kilik: “I saw it as a future that we’re almost in today.” [He likened the story to life in high school, and spoke of its relevance to our society today.] “Although it takes place in the future, it’s not really science fiction. It’s allegory for our times. If it were just fantasy, I don’t think [the huge popular response to the story] would be the thing that it is today.”

Q: “How do you keep the audience from being complicit in the killing of the other characters?”

Kilik: “That’s the challenge of making this film. The author had a father who was in Vietnam when she was 12, and she had nightmares about not knowing where he was or whether he was alive. Suzanne Collins wrote this with that memory, and today watching the war in Iraq and in Afghanistan and then flipping channels to a TV show like Survivor, they all started blending together and she wanted to address that. It’s the fog of war, the nightmare of what it could be like. She was, like David Lean, trying to write an anti-war movie.”

[One audience member had used the phrase “survival story” when asking a question of UVM professor emeritus Frank Manchel, who introduced Jon Kilik. Kilik picked up on that.] “Yes, I’m glad you used that word, ‘survival.’ The Hunger Games is about survival, not killing. I think that’s an important distinction when talking about the story.”

Q: Will there be a second movie?

Kilik: “It will happen. I hope it gets made by the same group who made this one happen. The Hunger Games was made like a little indie film. We made the movie without any interference. [He spoke about how many studios had turned down the movie, thinking it was untenable because of the violent premise, and how Lionsgate, who bought it, really let them have free rein because the expectations for success were low.] “It was like dancing through the raindrops. Now that it’s a hit, a lot of people are going to want to get involved and try to be smarter than we were, and as you know, that’s always a disaster.”

Q: How did the book get in your hands?

Kilik: “[Hunger Games director] Gary Ross has two 16-year -old twins who told him about this book.” [There was a lot more here about how they rely on enthusiasm and suggestions from kid readers in their families, and in friends’ families. Yay, kids!]

Q: How did you get to be the ones to make the movie?

Kilik: “There were other directors that the studio who had the rights to it had a list of, but Gary was very aggressive about it.” He spoke about how much they wanted to do it, and how persistence and a good plan won out.

Q: How did you feel about the actors?

[Kilik was very enthusiastic and warm about the entire cast; I couldn’t type fast enough to catch it all. After many  accolades for Jennifer Lawrence, who plays Katniss, he had some special words about the actor who plays Peeta.] Kilik: “In addition to Jennifer Lawrence—who carried the movie on her back — Josh Hutcherson is our secret weapon, the heart and soul….”

Q: The movie stayed really close to the book, which doesn’t always happen. Why did you decide to do that when so many Hollywood movies don’t?

Kilik: “I’m always trying to find the most honest way to make the film. Follow the road that the author has set up for you and stay close. Follow that truth. And these are just great actors, too.”

Q: Why did you decide not to have the dead tributes in the muttations?

Kilik: “We were trying to make the movie as real as possible, not to take you out of the movie. It was starting to feel like something that was too big. It would have opened up a whole other set of questions. It’s the end of the movie; it’s got to end without opening up a whole lot of other questions. Did you miss it?”

Q: [pause for thought] I just noticed it.

Q: Why didn’t Peeta lose his leg in the movie?

[I was so distracted by trying to remember how much we knew about Peeta’s leg having been mauled by the muttations and subsequently amputated and replaced with an artificial limb, and when we knew it—that I can only paraphrase Kilik’s response. He basically said that they had made some decisions about that that would affect the subsequent movies.]

Q: The scene with Snow and Seneca Crane in the garden wasn’t in the book. How did you think of that?

Kilik: “There was a little bit of creative license. If we stayed to exactly what was in the book, it might have gotten boring. We wanted to define the antagonist a little more, and give the audience different settings like the Game Center and the rose garden scene. And that gives you a little more character development.” 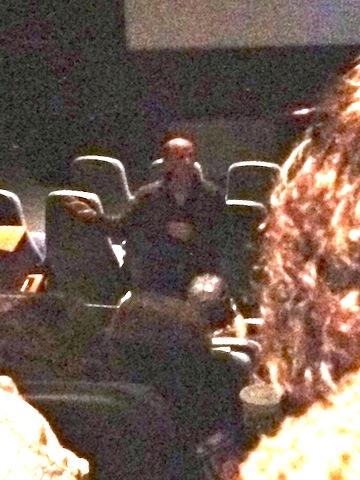 Dark theater + iPhone + distance = this photo. Apologies. (We were actually much farther away than the photo indicates.

Kilik: “The book is very much first person; it stays in Katniss ‘s head. When you see it, it’s very first-person narrating style and editing style – you are really in her shoes. We kept pushing the camera into the actors until it felt real. You’re really in her face constantly. It’s very visceral. She’s got such great expression that even without the sound on you can see what she’s feeling.”

Q: Why did you change the way Katniss got the mockingjay pin?

Kilik: [Acknowledges that this was one of the changes they talked a lot about with Suzanne and the other writers and producers. In the end, he said, they just went for a certain kind of storytelling efficiency.] “The movie’s two hours and 20 minutes; we wanted to keep it tight and not introduce a lot of extra characters. [He talked a little more about these kinds of changes.] “Knowing how many fans there were of the book; the fear of getting it right when you respect the material and want to do the best with it and if you just miss by a little bit it’s going to be a problem.”

Q: In the book, the Cornucopia is gold, but in the movie, it’s gray. Why?

Kilik: [laughs, nods] “It would have been nice golden, but it was the type of metal we had to work with…. Yeah. It might have been nice a different color.”

Q (this is the one I asked): In the midnight showing on Thursday, there were lots of younger kids, nine and ten years old, in the audience. In that showing, there were cheers when some of the ‘enemy’ Tributes were killed. I was hoping there would be some conversations in the car on the way home, but what would you say to those younger kids who are watching the movie to help keep the larger themes in mind?

Because I had asked the question, I didn’t want to be rude and look down at my phone, typing, while he answered, so unfortunately I don’t have any verbatim quotes on this question. He spoke again about its anti-war message, and the fact that it’s a story about survival, and that kids are rooting for Katniss and Peeta and are seeing the other Tributes as the enemy in that context. That it’s a war, and that’s what war does. I was a little disappointed that he didn’t really address the question of what age kid should be going to see this movie, but the question that came right after mine, from a little girl around seven or eight in the row behind me, answered that one pretty definitely.

Q: I was wondering, how did the kids get hurt in the movie but not in real life? I didn’t understand how that happened.

[And that really says it all about how old an audience member should be to see this film. There was a collective audience gasp and “awww/ohhhhhh” of realization at this. It was heartbreaking and exactly that bucket of cold clear water people who get caught up in national trends need to keep in mind. Children have gaps in experience and knowledge and development, some of which don’t even occur to us. I fervently hope parents will pay attention, talk to their kids about this stuff, and not just get swept away by the “everybody’s going to this movie!” mentality. Argh.]

In a way, it was the most appropriate possible question to end the Q&A. I’m sure there was a lot of conversation in that family’s car on the way home, both about special effects, and about the meaning of a movie meant to excoriate war by showing war. And for those of us in the bookselling and movie industries, selling a story to children, it keeps fresh that all-too-easily blurred line where content and commerce collide.