David Elliott and Randy Cecil’s joyous celebration of life, And Here’s to You, is one of my favorite picture books of all time. Of all time! It’s utterly perfect, one of those under-known books I recommend to everyone (along with Linda Smith and Marla Frazee’s Mrs. Biddlebox and Margaret Mahy and Polly Dunbar’s Down the Back of the Chair). So you might imagine my delight when Facebook/book-world pal Kirsten Cappy posted this status update:

“Proud to announce that David Elliott‘s picture book AND HERE’S TO YOU and Scott Nash‘s picture book BUGLIEST BUG (both from the marvelous Candlewick Press) will become permanent parts of Portland, Maine’s green spaces. More soon…”

I had to know more. (Not the least of which was, how I had missed Bugliest Bug, which sounds adorable! I love both Carol Diggory Shields’ and Scott Nash’s work, but hadn’t seen the buggy one. This is being rectified.) How were these two books being immortalized in an outdoor space? How were they chosen? How did this work for the authors and their publishers? How can other communities take this amazing idea and bring it to life?

I emailed Kirsten some questions to find out. Aside from my questions in italics, the rest of the post is from Kirsten. Enjoy! How did this project begin, and how did you get funding for it?

The idea for StoryWalk started in your fair state [Vermont]. Anne Ferguson at the Kellogg Hubbard Library in Montpelier, VT, developed the first The StoryWalk™ Project in collaboration with the Vermont Bicycle & Pedestrian Coalition. Anne and her group simply (and brilliantly) disassemble an actual picture book, laminate it, staple the pages to stakes, and spread the story along a trail or walk—encouraging both physical activity and literacy.

[Anne’s niece,] Victoria Rogers, MD, the medical advisor for the Maine community health project, Let’s Go!, brought the idea to Maine. When Portland was awarded a Communities Putting Prevention to Work (CPPW) grant in 2010, the administrators at Portland Public Health thought of StoryWalk—already a tool in the community health realm in Maine.  The grant in Portland is to be used to increase physical activity, and provide more education on making healthy eating choices.  Partnering with Curious City and Portland Public Library, the grant produced one mobile StoryWalk using NEST, NOOK, AND CRANNY by Susan Blackaby and illustrated by Jamie Hogan (Charlesbridge).

These pictures of its appearance in the woods of Peaks Island are lovely….

How did you get involved with the project?

After many months of unsuccessful calls to publishers seeking permissions they brought me in, as I consult for Raising Readers, a Maine state literacy project. I decided not to call into the permission/legal dept. of the pubs, but to work with local authors, who would message their editors, who in turn would message the permission/legal depts. Approvals came fast as we pitched it as a great marketing opportunity for the book/author.

How did you choose which books to include?

The books should be of universal appeal, of course. It certainly helps if the books depict appreciation of our grand outdoors or show a character being active. It also helps GREATLY to work with a creator who can serve as an advocate for the program with their publisher or with a publisher who readily picks up the phone. Boston-based publishers Charlesbridge and Candlewick Press gave us immediate and enthusiastic permission. [Charlesbridge gave permission for

THE BUGLIEST BUG by Carol Diggory Shields and illustrated by Scott Nash is a naturally and wildly rollicking read aloud complete with bugs performing great physical feats to be declared the “bugliest bug of them all.” These silly feats and Nash’s hilarious bugs, allowed for some deliciously fun actions for kids to perform as they read the story.

AND HERE’S TO YOU by David Elliott and illustrated by Randy Cecil is simply a perfect picture book. Its celebration of the peculiarities of animals, birds, insects, people, and finally ourselves is a joyful ordering of the world. The location for this StoryWalk is home to many ESL children and adults and I wanted a book that could grow with readers. The right hand page simply states for example, “I love dogs!” –easily read by a new English speaker while the left-hand panel delights in alterative language that a reader can explore over time.

What will the StoryWalk look like?  Is this considered a permanent installation? What happens to it in the winter?

Here are some photos of the outdoor site itself.  The signs will be approximately 30” x 40” on laminated weather-proof board. They will be posted on cedar stakes and will stay up year round. They will both be in the ground by 10/11/11. The first sign will sport the cover of the book and the following 12 signs will be a photograph of the actual open spread of the book. At the bottom of each sign will be a character encouraging kids to move or pretend some aspect of the action on the page.

For a prior StoryWalks project, I worked with a local company, Banacom Sign, and we decided to transfer digital scans of picture books onto weatherproof real estate signage. Like real estate signage, they came with metal pronged stakes so they could be planted anywhere. 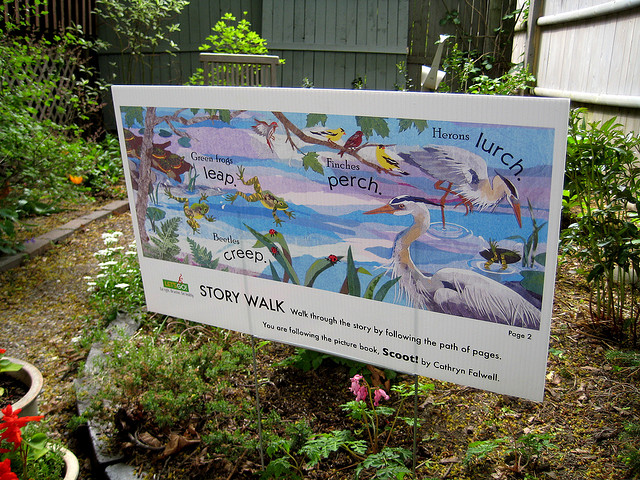 Together we produced signage for two books: SCOOT! By Cathryn Falwell (HarperCollins) and DOWN TO THE SEA WITH MR. MAGEE by Chris Van Dusen (Chronicle). For both books, I designed “actions” or ways to move with the story or characters to increase readers’ physical activity or just PLAY with the book. Cathryn Falwell and Chris Van Dusen were both delighted by this and drew their characters in the various poses. These became smaller signs that ran between the picture book spreads. 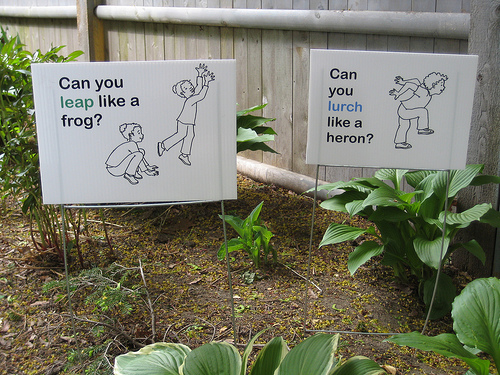 Let’s Go! and Curious City have since partnered with other organizations to reprint SCOOT! For example, The Beaver Brook Association in NH reprinted one in association with NH Children in Nature and Coastal Healthy Communities Coalition printed several sets for Maine libraries. (Cathryn Falwell is a big fan of the program and her book has been used in a similar project called Story Trail at the Dawes Arboretum in Newark, Ohio.) 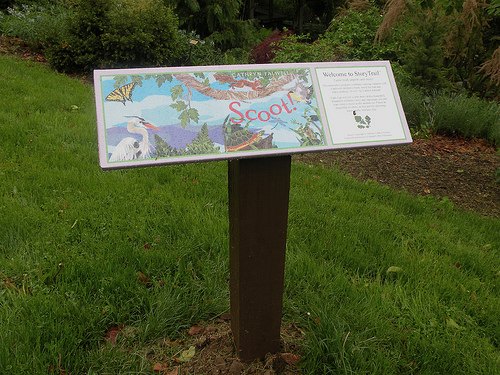 And then Winter Kids worked with us to create one for SNOW DAY! by Patricia Lakin and Scott Nash (Penguin). What does this mean for the publisher and the author and illustrator, financially speaking, if anything?

No one gains financially off of the project. The project is simply a commitment by publisher, author, and illustrator to community literacy. It is, though, great exposure for all three.

Any tips for other towns or cities considering a project like this?

The StoryWalk Project has great tips on their website for the laminated picture book pages version. I am happy to share budgets and work plans with anyone who wants to explore more permanent options, either portable or stationary.

Elizabeth here. I just want to thank Kirsten Cappy for bringing this amazing project to the PW ShelfTalker readership! This makes me want to put StoryWalks in every park around Burlington!