We had a great event at the store on Saturday with pirates. We were joined by pirates Captain Q and Crab Claw, who came in full pirate regalia to help author Mary Quattl 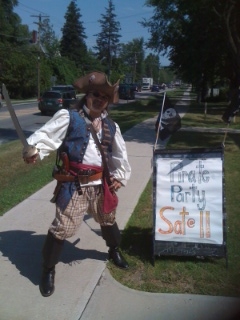 ebaum celebrate her new book, Pirate vs. Pirate: The Terrific Tale of a Big, Blustery Maritime Match. One thing I learned about Mary Quattlebaum is she is organized and the event is great fun, and she makes a rousing Captain Q.

Crab Claw set the tone by getting passersby excited about the event. It 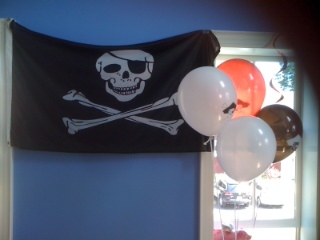 was really funny to see people’s head turn as he Arrr-ed at cars. Grown men smiled and honked their horns. Kids poked their heads out car windows and a few people waved.

We had a great time decorating. Who knew one of my staffers had a full-sized pirate flag? It made the room look great and added to all the pirate-y setup. Every child got a temporary tattoo when they first came in. This desig 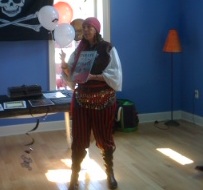 nated them to be pirates-in-training. All was fine until Crab Claw came upstairs from the street into our event space. Our smallest pirate, who was excited and ready for a fun event and was game for just about everything up to that moment, took one look at him and started wailing, for five long minutes. Poor thing. To her credit, she calmed quickly and was rapt the entire time. 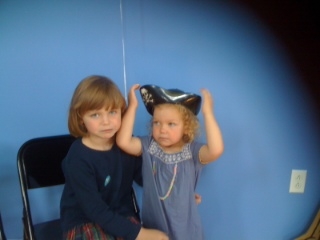 Picture if you will, 25 little kids, all under five, shouting out ARRRR, Ahoy, Matey and, my personal favorite, Huzzah!  It was great. We learned that when Pirate Q raised her hand we all should ARRRR. I Huzzah-ed instead much to the amusement of everyone. 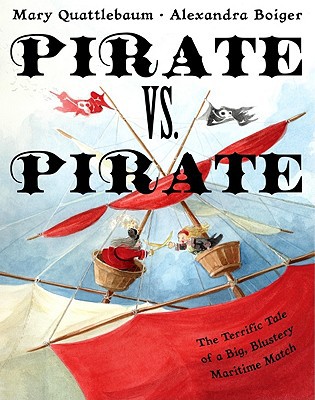 The event was loads of fun. Mary did something that was very clever: she stopped reading just before the climatic conclusion of the story. What a great way to spur sales. But not before Mary showed everyone what was in the pirate treasure chest. The once wriggly kids were stock still and silent as Mary went item by item through the chest. Simple pieces of ribbon were golden threads, old coins were dubloons, costume jewelry were riches, and the pendant had a bewitching quality.

All the kids got a wanted poster that Mary brought, as well as bookmarks. The store provided each trainee a pirate balloon and a bag of gold coin candies. These happy pirates then bought books and went downstairs and bought some more books.

So, here’s a grand Huzzah! for all the mateys who helped make this event so much fun.