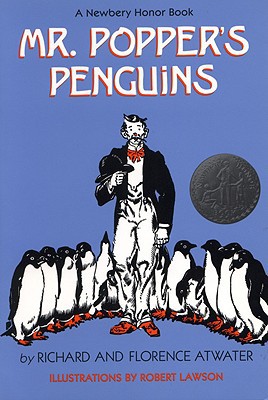 In college, I made a friend, a writing buddy who’s been my good pal for almost — holy cow! — thirty years. We both headed to L.A. after college, where our families lived, and got entry-level jobs in “the business” (the entertainment industry, that is). We’d hang out at a pub at the Beverly Center on La Cienega Boulevard, and fiddle around trying to co-write a screenplay, or at least come up with an idea for one. We didn’t get a lot of writing done, but we were amusing enough that the manager sent us over free drinks. Good times.

Gregg stayed on in L.A., continued with his screenwriting dream, and made it happen. He even found a writing partner who actually WROTE! Imagine. Fast forward to January 2011, when I hear from my pal that he is working on the DVD extras for the Mr. Popper’s Penguins movie, based on the Newbery Honor book by Richard and Florence Atwater. Gregg is currently a producer and a writer, and does a variety of all things movie, including scripting DVD extras for Hollywood films. What’s great about Gregg, among other things, is that he’s a reader and a dad, and appreciates children’s literature to a degree that can be unusual in his field. He proposed (and received approval for) a segment for the DVD that celebrates the book and its authors, shares the history of the book’s creation and legacy, and includes interviews with the Atwater estate and children’s book experts.

As his resident children’s book professional friend, Gregg contacted me to see if I would be interviewed for the DVD. As much as I *love* the idea of The Flying Pig being represented on a gajillion DVD watchers, I knew that really, he needed to speak with a true expert on children’s book history, and so I hooked him up with the legendary Anita Silvey.

Yesterday, two of my worlds collided when I drove to Boston to Anita’s house on the tail end of the film crew and Gregg interviewing her. What a pleasure to see the fruitful endeavors of two wonderful people from different parts of my life! (The only downside was that, because of rights issues, some of Anita’s marvelous children’s book art had to be removed from the background before they could film her.)

I have no idea how the movie’s release will affect book sales. While the movie itself bears almost no relationship to the book upon which it was based (that’s a topic for another post; sigh), at least there will be some representation of the original creation on the DVD. Happily, the movie tie-in paperback is still the original story — which is one of the most charming, delightful children’s novels ever written (and illustrated by the marvelous Robert Lawson, too).

Apparently the movie is also charming in its own right; I just wish that it were clearer to families that it was inspired by the book, not a mirror of it, and that kids will still want to read the book after seeing the movie.

My suggestion to all of us — booksellers, authors, teachers, librarians, parents, aunts, uncles, etc. — is to grab a copy of Mr. Popper’s Penguins before the movie’s release on June 24, and let a new generation of children fall in love with it all over again. Then, when they see the movie, you can have some great conversations about the differences. And then make sure to watch that DVD when it’s released, and think of my friend and Anita and the Atwater family helping to make sure that the book lives on!