Last Saturday we hosted a Fairy Tea Party in our loft space above the store. We thought having a bunch of fairies at a tea party would be a fun way to break up what has been a very long winter. We didn’t think we’d get more than twenty or so kids. Boy, were we wrong.

Approximately sixty little fairies arrived, festooned in fairy clothes complete with wands, tiaras and wings. Let’s not forget the wings, lots and lots of wings. Do you know how hard it is to seat sixty little fairies with wings? And I’m not talking small wings. Check out this little one 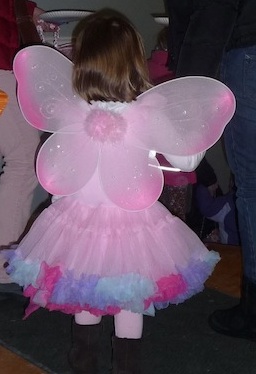 . Adorable, yes. Fits easily on a folding chair, not so much. But oh, they were so cute. As each little fairy filled out her (let’s face it, there were no boys at this event) we had a make-a-wish ritual. We asked each girl to close her eyes and make a wish. As the wish was thought, we sprinkled them with fairy dust. This was the beginning of what was to be a very messy event.

Our staffer, Sandy, set up the room with lovely white paper tablecloths and a purple tulle and small flowers. Every grouping of three seats had some crayons and all the little pixies were encouraged to draw on the tables. This was a lovely distraction technique until we could seat all the little ones. Our first craft was decorating a paper plate that had a butterfly drawn on it. This art project involved glitter glue, feathers, sparkles and crayons. 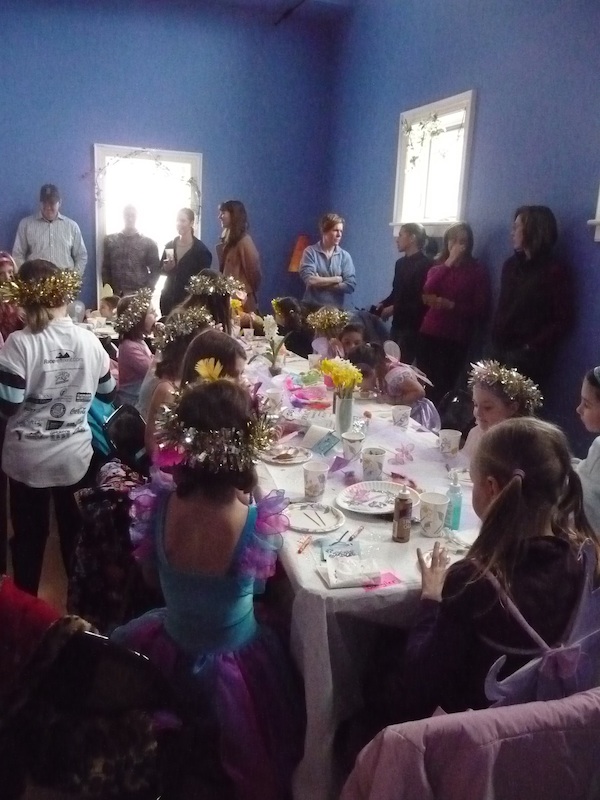 I love that the moms of the littler fairies really hung back and let their kids do their own thing.

Next, Elizabeth read Alice, the Fairy by David Shannon, a great book that lots of folks didn’t seem to know, but loved. Our next activity was making a little book that the kids could keep. We made the notebooks out of 3×3 pieces of paper that we hole-punched and the kids then ribboned together. Everyone seemed very happy with the crafts.

Oh, but we had food, glorious food. Our staffer, JP, made 96 mini cupcakes and frosted them with white icing and then each had a lovely bunch of sprinkles. They were lovely. Elizabeth and I made pixie rolls: decrusted white bread (fairies hate crusts) spread with grape jelly, rolled and cut and dipped in lavender sugar. (Can I say how much fun it was to make these pixie rolls at six in the morning? I’m not a fairy person, and the pixie rolls were harder than it sounds). Sandy made awesome fruit kabobs, which parents were very grateful to see. Oh, we had a fairy punch as well which we served to each little person.

The one thing we didn’t have were books. This was just a party for the sake of having a party. But Elizabeth found a clever way to let the party-goers know that there was a new Rainbow Magic Ocean Fairy in the Scholastic series. We didn’t charge for this party, and perhaps that was a mistake. I did some math after the party at the end of the day. Fairy partygoers spent well over $300 in the store after the party. Perhaps not a fortune, but the goodwill this party generated has been tremendous as I can’t go anywhere in town without a parent thanking me for such a fun party.

So, now that I’m rested, we’re planning an outdoor party for this summer where we’ll gather materials for making actual fairy houses. This time, no pixie rolls.