Well, after almost 15 years of having the store, it has happened. A customer asked me to remove a book from my shelves.
This has never happened before. We’ve had people move books they thought were objectionable, but never has someone looked me in the eye and said, “Are you the owner? I want you to remove this book because it makes fun of childhood sexual abuse.” I apologized that she found the book objectionable and gave her a refund.
The book in question is My First Dictionary: Corrupting Young Minds One 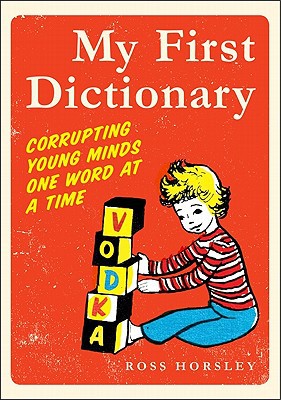 Word at a Time by Ross Horsley. Does this book cross the line of good taste? Sometimes, sure it does. But honestly, so do lots of humor books. Parts of the book are laugh-out-loud funny, and parts of it made me cringe. I try to warn customers that sometimes it’s a little bleak. There are some letters about abandonment and parental drinking that seem particularly cruel.
The customer went on to say, “This book is not appropriate in a children’s store.” To which I countered, half my store is made up of adult books. And besides, one person’s unhappiness is not enough of a reason to pull a book. If that were the case we’d never sell Goodnight Moon, Love You Forever, or Harry Potter because plenty of people have issues with those books. And I’ll be honest, I really bristle at the phrase “it’s not appropriate in a children’s store.” Well, parents shop in children’s stores and often the “objectionable” books are well out of reach of kids.
This brought up  a larger issue. When does curation of a collection cross the censorship line? I like to think of myself as a fairly open-minded buyer who doesn’t reject a book because it’s objectionable. I don’t buy certain books because I don’t think they’ll sell or they’re not a good fit for my customer base. Is that act one of censorship? Now I’m wondering about all my buying.
I will order anyone anything, even if I hate the topic or the book. That’s not my place, to judge someone’s book buying.  Obviously, my goal in stocking my store is not to have books people find offensive and therefore won’t buy. But some people find David Sedaris and Mary Karr objectionable, and I love them and will continue to stock and recommend their books.
So where is the line? I have puzzled over this ever since the customer left and I still don’t know.