As you can see from this PW article, Simon & Schuster is now selling e-chapters of books. As exciting as this advance is it doesn’t go nearly far enough, which is why, at DDG, our crack team of scientists has just developed the next big advance for reading, the Corneal Lens “Pay as you go” E-Reading Register.

When you fill your car with gas you only pay for what goes in the tank, right? And that’s the beauty of the CLERR™: you only pay for what you actually read. As easy to put in as a contact lens, the CLERR™ emits a colorless laser image which interacts with the CLERR™ portable E-Reader, or any of the vast available CLERR™ digital library of ebooks and e-magazines, available for you to read on any computer. The way it works is that you can download whatever you want for free. You just pay as you read!

As your eyes pass over any CLERR™ digital content, the CLERR™ lens transmits a colorless infrared beam which interacts with the text and wirelessly transmits the number of characters you read, automatically debiting your credit card .002 cents per character. You don’t pay for what you don’t read! And if your credit card is overdrawn? No problem. The CLERR™ will deliver a searing pain into your cerebral cortex, letting you know to deposit more funds.

Frequently asked questions about the CLERR™:

Can other people steal a peak at your CLERR™ digital content without wearing their CLERR™ lens? No, it is only intelligible if you have a CLERR™ lens in.

Can I put in my CLERR™ lens myself? Sure!

Can I remove my CLERR™ lens myself? No! Only a DDG CLERR™ technician can remove the lens.

Can I re-read text with the CLERR™? You can re-read up to 1,000 characters for free, and after that re-read passages are charged at a special half-off rate. The re-reading rate is currently the same whether you re-read because you liked it a lot or because you’ve forgotten it. Hopefully we’ll have the capability of making finer distinctions soon.

And, with the introduction of CLERR™ billboards, movies, television shows, posters, and flyers, you’ll be able to pay for almost everything you read! 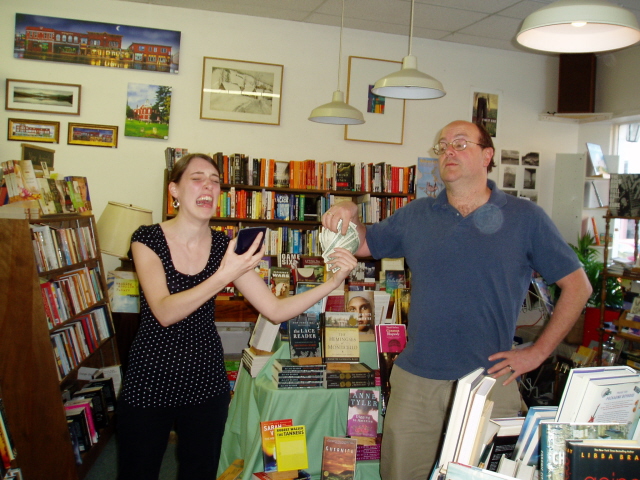 Should you worry about being trapped out on the street because your credit card is overdrawn and every written object you see is causing your CLERR™ lens to transmit searing pain to your cerebral cortex? No! Just shut your eyes and ask someone to guide you to the nearest bank.