So here’s my plan for writing up a bit of first-person accounting of Winter Institute up until Wednesday afternoon, when I took a minute to dash this off. The plan calls for me to briefly mention a few items in note and then discuss one important event at length. We’ll see how that goes.

I came down to Baltimore on Saturday for two days of pre-Winter Institute ABA Board meetings. The upshot of which is that I can disclose the following information. Our incoming CEO Allison Hill is terrific and going to be a sensational leader. Also, it is to be noted that she and the justly promoted 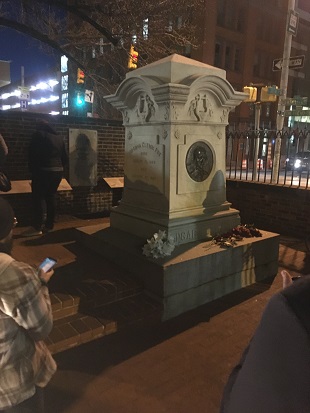 Joy Dallenegra Sanger, our new COO, make for a good beyond hope executive team. Furthermore, considering that we all know how gender bias continues to haunt children’s bookselling, ABA’s new leadership augurs well for addressing that bias meaningfully on the bookselling side as we move forward.

Another thing I’ll mention briefly is the International Reception which was held at Westminster Church, the site of Edgar Allan Poe’s grave. I think a successful humor book could be built around an anthology of bad docent stories and certainly the Poe’s grave tour I experienced would be worthy of inclusion. Our docent explained to us that Poe was a perfect human being who was the kindest person ever born and that he only chose his writing topics based on what the public demanded not on anything internal to himself. His marriage to a 13-year-old was not only normal for the time but a pure love story for the ages unblemished by any human foibles on either side. Illuminating! 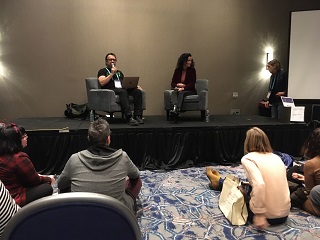 I’ll also briefly mention the American Dirt event featuring a conversation between bookseller Javier Ramirez and author Jeanine Cummings, and questions from the audience. I know this will be broadly reported on in PW so I will just mention that I thought that Javier, Jeanine, and the audience did a great job handling a difficult topic in an honest, unflinching manner. I understand not everyone will agree with that assessment. The dispute concerns whether or not people should have the freedom to express themselves independent of enforced strictures based on a person’s ethnic composition. I do think it is worth considering that personal identity is immensely complex, and that ethnicity is an important, but still only a single variable comingled with vagaries of character, trauma, and myriads of other life experiences. The event, as I saw it, reinforced that we can debate ideas without dehumanizing each other, and that criticizing rather than immolating books is a better means of contention. 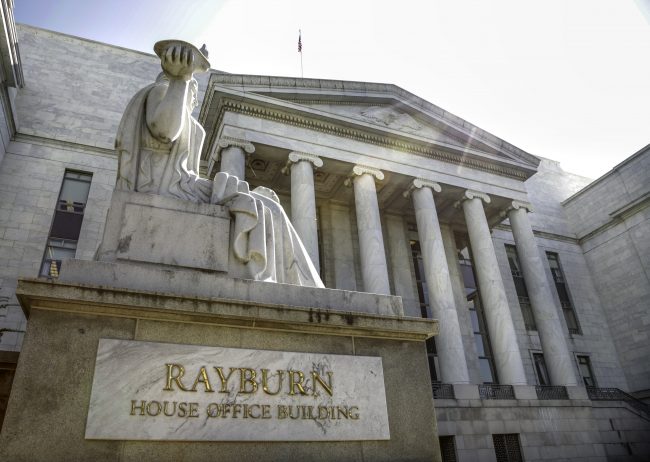 My at length topic, which I’ve actually run out of time to handle at length, was the anti-trust symposium I went to on Tuesday. This was held at the House of Representatives’ Rayburn Office Building. I was in charge of one of the two buses leaving the Hilton.  I couldn’t see any reason to think anything untoward was going to happen and had joked beforehand that, much much in the way reading dsytopian fiction makes one feel disappointed in not having a pandemic arrive or a large meteor strike the earth, I was sure to be let down by an uneventful bus ride.  As it turned out my joking was ill founded. Only one of two buses showed up at the hotel and my bus was dispatched 45 minutes late. It also turned out that it was not dispatched with the authorization needed to get anywhere near the Rayburn building in the heightened security near the capital on Tuesday. After circling around fruitlessly for a half hour trying to find a way in we ended up being dropped off 1.5 miles away and having to contend with some folk racing off in the wrong directions, and differences in walking speeds threatening to separate us even after Michael Barnard of Rakestraw Books gallantly corralled our errant party.

In any case we did all arrive at the Rayburn Building, though quite late. The symposium was nonetheless terrific. What I found most interesting was the information on the manner in which Amazon’s platforms, such as Amazon Web Services and the Amazon Marketplace, not only makes money for Amazon (for example, AWS is the most profitable arm of the many armed Amazon company, and the Amazon Marketplace generates 20% profit margin for Amazon as opposed to 5% on its own direct sales), but it allows them to directly control their own competitors. Most of Amazon’s competitors use AWS and Amazon Marketplace because they are dominant platforms. This allows Amazon to both profit and regulate their competition in an increasingly authoritative manner. For example, separate marketplace companies cannot be operated under the same IP address. In one instance two individual marketplace vendors happened to fall in love and moved in together. Amazon noted that they were using the same IP address and suspended both accounts. The two vendors had to petition Amazon for permission to live together.

Amazon uses its suspension power both actively and authoritatively regulating the shipping speeds, and error rates of its own competitors while having control over the algorithm results of both its own products and those of its competitors.

As retailers we are dependent on our neighbors. I am dependent on having downtown retail neighbors. I am also dependent on having book industry neighbors, such as publishers, authors, and wholesalers, stay independent and viable. Amazon’s vertical and horizontal monopolistic reach, its determination to bring a subscription model to books in which they have exclusive content in such a way as to break down the whole world of proprietary publishing, their efforts to both drain away the tax base of local economies as well as undermining its retailers, threatens the interdependence on which all community economics are based. No matter how nimble or resourceful we are, we are not in a sustainable position—none of us in the book industry are—not without the government being spurred to regulate Amazon through anti-trust and other tools in their anti-monopoly toolkit.

Those were some of the takeaways from the symposium, which literally took away immediately to a meeting with my congressman, a meeting the symposium had done a terrific job preparing me for. As we consider the different elements of WI15, I do believe that advocacy and education are totally interdependent in this moment.